[Arnov] is a huge fan of the Back to the Future franchise, so he wanted some memorabilia from the movie to decorate his work area. Official memorabilia from successful movie franchises can be pretty expensive, so [Arnov] opted to make something himself instead, creating his own flux capacitor PCB badge. 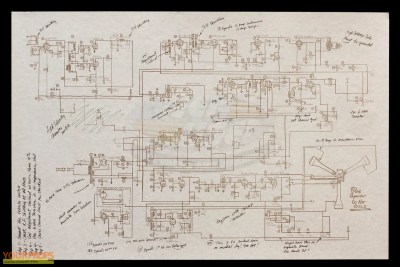 Fortunately, [Arnov’s] design isn’t as complicated as Doc’s was from the movie (pictured on the right), so it should be a lot easier to replicate. We have a simple LED circuit driven by an 8205S MOSFET and controlled by an ATtiny microcontroller. There’s a small diode for auto-switching between USB and battery power as well as a few current limiting resistors for the LEDs. Fortunately, [Arnov’s] project only requires 0.017 W to power, so no plutonium nuclear reactor is necessary and you can easily power it with a standard coin cell battery or with a USB. That’s quite a relief.

As with many of [Arnov’s] projects, the beauty in its design lies in the detail he places on the PCB layout. In this case, the layout is a bit easier than some of his other work needing only to arrange the blinking LEDs in a “Y” shape to mirror the flux capacitor seen in the movies. He also adds a bit of detail to the silkscreen to help complete the aesthetic.

We think this is worth adding to your PCB badge collection.