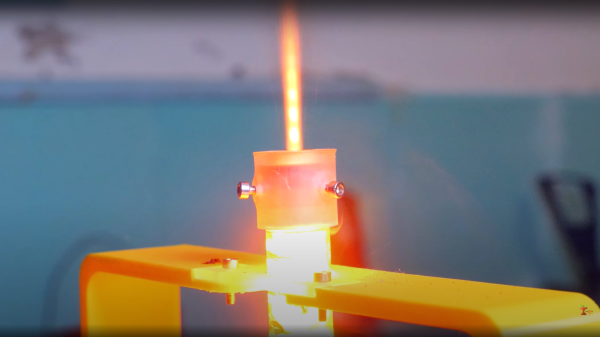 [Integza] is on a mission to find as many ways as possible to build rockets and other engines using 3D printing and other accessible manufacturing techniques. He had an a great idea – is it possible to 3D print a solid fuelled rocket, (video, embedded below) specifically can you 3D print the rocket grain itself? By using the resin as a fuel and mixing in a potent oxidiser (ammonium perchlorate specifically – thanks for the tip NASA!) he has some, erm, mixed success.

As many of us (ahem, I mean you) can attest to, when in the throes of amateur solid-propellant rocket engine experimentation (just speaking theoretically, you understand) it’s not an easy task to balance the thrust over time and keep the combustion pressure within bounds of the enclosure’s capability. Once you’ve cracked making and securing a nozzle within the combustion chamber, the easiest task is to get control of the fuel/oxidiser/binder (called the fuel grain) ratio, particle size and cast the mixture into a solid, dry mass inside. The hard part is designing and controlling the shape of the grain, such that as the surface of the grain burns, the actively burning surface area remains pretty constant over time. A simple cylindrical hole would obviously increase in diameter over time, increasing the burning surface area, and causing the burn rate and resulting pressure to constantly increase. This is bad news. Various internal profiles have been tested, but most common these days is a multi-pointed star shape, which when used with inhibitor compounds mixed in the grain, allows the thrust to be accurately controlled.

[Integza] tried a few experiments to determine the most appropriate fuel/binder/oxidiser ratio, then 3D printed a few fuel grain pellets, rammed them into an acrylic tube combustion chamber (obviously) and attached a 3D printed nozzle. You can see for yourself the mach diamonds in the exhaust plume (which is nice) due to the supersonic flow being marginally over-expanded. Ideally the nozzle wouldn’t be made from plastic, but it only needs to survive a couple of seconds, so that’s not really an issue here.

The question of whether 3D printed fuel grains are viable was posed on space stack exchange a few years ago, which was an interesting read.

We’ve seen some more sophisticated 3D printed rocket engines lately, such as this vortex-cooled, liquid-fuel engine, and over on Hackaday,IO, here’s a 3D printed engine attempting to use PLA as the fuel source.

END_OF_DOCUMENT_TOKEN_TO_BE_REPLACED

A liquid-fuel rocket engine is just about the hardest thing anyone could ever build. There are considerations for thermodynamics, machining, electronics, material science, and software just to have something that won’t blow up on the test rig. The data to build a liquid engine isn’t easy to find, either: a lot of helpful info is classified or locked up in one of [Elon]’s file cabinets.

[Graham] over at Fubar Labs in New Jersey is working to change this. He’s developing an open source, 3D printed, liquid fuel rocket engine. Right now, it’s not going to fly, but that’s not the point: the first step towards developing a successful rocket is to develop a successful engine, and [Graham] is hard at work making this a reality.

This engine, powered by gaseous oxygen and ethanol, is designed for 3D printing. It’s actually a great use of the technology; SpaceX and NASA have produced 3D printed engine parts using DMLS printers, but [Graham] is using the much cheaper (and available at Shapeways) metal SLS printers to produce his engine. Rocket engines are extremely hard to manufacture with traditional methods, making 3D printing the perfect process for building a rocket engine.

So far, [Graham] has printed the engine, injector, and igniter, all for the purpose of shoving oxygen and ethanol into the combustion chamber, lighting it, and marveling at the Mach cones. You can see a video of that below, but there’s also a few incredible resources on GitHub, the Fubar Labs wiki, and a bunch of pictures and test results here.