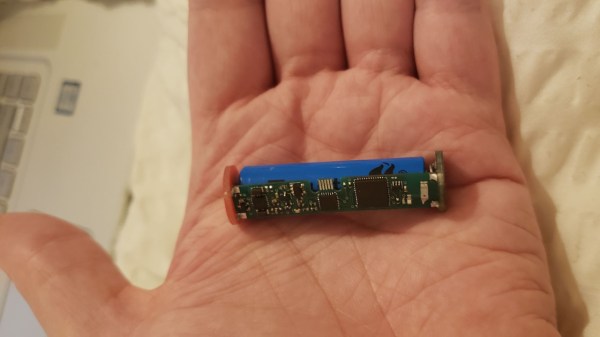 Internet-connected sex toys are a great way to surprise your partner from work (even the home office) or for spicing up long-distance relationships. For some extra excitement, they also add that thrill of potentially having all your very sensitive private data exposed to the public — but hey, it’s not our place to kink-shame. However, their vulnerability issues are indeed common enough to make them regular guests in security conferences, so what better way to fight fire with fire than simply inviting the whole of Twitter in on your ride? Well, [Space Buck] built just the right device for that: the Double-Oh Battery, an open source LiPo-cell-powered ESP32 board in AA battery form factor as drop-in replacement to control a device’s supply voltage via WiFi.

In their simplest and cheapest form, vibrating toys are nothing more than a battery-powered motor with an on-off switch, and even the more sophisticated ones with different intensity levels and patterns are usually limited to the same ten or so varieties that may eventually leave something to be desired. To improve on that without actually taking the devices apart, [Space Buck] initially built the Slot-in Manipulator of Output Levels, a tiny board that squeezed directly onto the battery to have a pre-programmed pattern enabling and disabling the supply voltage — or have it turned into an alarm clock. But understandably, re-programming patterns can get annoying in the long run, so adding WiFi and a web server seemed the logical next step. Of course, more functionality requires more space, so to keep the AA battery form factor, the Double-Oh Battery’s PCB piggybacks now on a smaller 10440 LiPo cell.

But then, where’s the point of having a WiFi-enabled vibrator with a web server — that also happens to serve a guestbook — if you don’t open it up to the internet? So in some daring experiments, [Space Buck] showcased the project’s potential by hooking it up to his Twitter account and have the announcement tweet’s likes and retweets take over the control, adding a welcoming element of surprise, no doubt. Taking this further towards Instagram for example might be a nice vanity reward-system improvement as well, or otherwise make a great gift to send a message to all those attention-seeking people in your circle.

All fun aside, it’s an interesting project to remote control a device’s power supply, even though its application area might be rather limited due to the whole battery nature, but the usual Sonoff switches may seem a bit unfitting here. If this sparked your interest in lithium-based batteries, check out [Lewin Day]’s beginner guide and [Bob Baddeley]’s deeper dive into their chemistry.

Screwdriving! It’s like wardriving but instead of discovering WiFi networks, the aim is to discover Bluetooth Low Energy (BLE)  devices of a special kind: adult toys. Yes, everything’s going to be connected, even vibrators. Welcome to the 21st century.

Security researcher [Alex Lomas] recently found that a lot of BLE-enabled adult toys are completely vulnerable to malicious attacks. In fact, they are basically wide open to anyone by design.

“Adult toys lend themselves to being great testbeds for IoT research: they’re BLE, they’re relatively cheap, they’re accessible and have companion apps for the full spectrum of testing.”

Yes… great test beds… Erm, anyway, [Alex Lomas] found that there is no PIN nor password protection, or the PIN is static and generic (0000 / 1234) on every Bluetooth adult toy analysed. Manufacturers don’t want to go through the hassle, presumably because sex toys lack displays that would enable a classic Bluetooth pairing, with random PIN and so on. While this might be a valid point, almost all electronic appliances have an “ON/OFF” button for input and some LED (or even vibration in these cases) that allow some form of output. It could be done, and it’s not like vibrators are the only minimalistic appliances out there in the IoT world.

Although BLE security is crippled by design (PDF), it is possible to add security on top of flawed protocols. The average web-browser does it all the time. The communications don’t have to be clear-text where you can literally see “Vibrate:10” flying around in packets. Encryption could be implemented on top of the BLE link between the app and the device, for instance. Understandably, security in some devices is not absolutely critical. That being said, the security bar doesn’t have to be lowered to zero — it’s not safe for work or play.