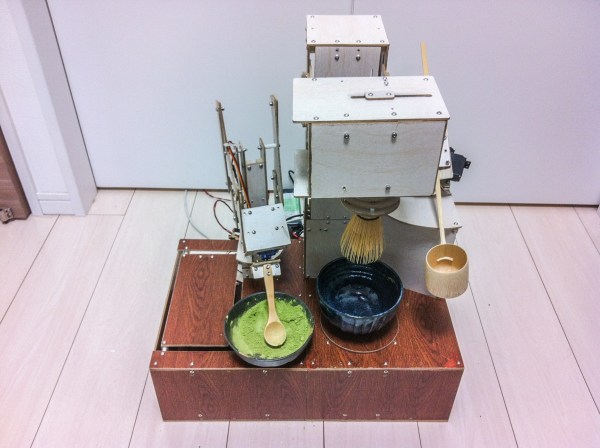 END_OF_DOCUMENT_TOKEN_TO_BE_REPLACED

In our latest episode of “IoT-Schadenfreude Theater” we bring you the story of [Mark], a British man who can’t boil water. Or more specifically, a man who can’t integrate MQTT with Amazon Echo, or IFTTT with HomeKit.

Yes, yes. We all love to laugh at a technology in its infancy. It’s like when robots fall down: it’s a cheap shot and things will surely get better, right? Indeed, the Guardian has had its fun with this particular WiFi kettle before — they’re British and nothing is more important than a remote-controlled cuppa.

Every time we hear about one walled-garden protocol not speaking to another, and the resulting configuration mayhem that ensues, we can’t help think that [Mike] was right: home automation has a software problem. But that’s putting the blame on the technology. (We’re sure that [Mark] could have made the kettle work if he’d just applied a little Wireshark.)

There’s another mismatch here — one of expectations about the users. A water kettle is an object that should be usable by grandmothers, and a complex networked device is clearly aimed at techies and early adopters. Combining the two is asking for trouble. Non-functioning IoT devices are the blinking 12:00 of our generation.

What do you think? Where’s the blame here? Poor design, bad software stack, stupid users, or failure of mega-corps to integrate their systems together? More importantly, how could we make it better? 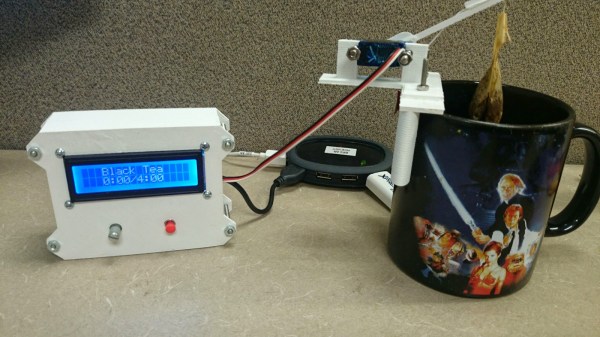 While most of us here at Hack a Day can’t live without our daily java, we do understand and respect the tea drinking hackers out there, like [Brian McEvoy] the 24 Hour Engineer. Like any self-respecting hacker, [Brian] seeks to improve the efficiency of day-to-day tasks in order to spend his time on things that really matter — so he decided to automate his tea cup.

He’s 3D printed a small tea-bagging mechanism that a little RC servo motor can actuate, which allows him to control the amount of time a tea bag spends steeping in his mug. Another 3D printed enclosure includes the Arduino, a few buttons, and an LCD screen to allow you to select the steeping time for your favorite herb. In fact, the majority of this project is 3D printed which means the majority of the cost comes from the minimal electronics required — stuff you probably already have lying around. He’s also included all the design files you need in order to make your own.

The project has been in process for a while, but he’s finally finished it off, and it works great. If you’re hungry for some of the nitty-gritty build logs and troubleshooting a long the way, he’s got a whole bunch of blog posts from throughout the process.