Bad Obsession Motorsport have been stuffing the engine and suspension from a 4WD Celica into an old Mini since forever. It is a wonderful homage to Police Squad and some of the best machining and fabrication you’ll see on YouTube. The latest episode tackled the electrical system and how to drive an alternator in an extremely cramped engine bay. The solution was a strange flex-shaft confabulation, and now the Bad Obsession Motorsport guys have a video on how they attached an alternator to a car where no alternator should go. It’s forty minutes of machining, go watch it.

I’m the future of autonomous flight! This week, I got a market research survey in my email from Uber, wanting me to give my thoughts on autonomous ridesharing VTOL aircraft. Uber’s current plan for ridesharing small aircraft involves buying whatever Embraer comes up with (Uber is not developing their own aircraft), not having pilots (this will never get past the FAA), and turning a random parking lot in LA into the busiest airport in the world (by aircraft movements, which again is something that will never get past the FAA). Needless to say, this is criminally dumb, and I’m more than happy to give my thoughts. Below are the relevant screencaps of the survey:

The crux of this survey is basic market research; how much would I pay for a VTOL ride sharing service versus buying a new (autonomous) car versus using an autonomous Uber. You’ve also got a Likert scale thingy asking me if I’m comfortable flying in a battery-powered aircraft. Protip: I highly doubt anyone given this survey has flown in a battery-powered aircraft. Proprotip: the easiest way to screw up the scoring for a Likert scale is to answer ‘1’ for the first question, ‘2’ for the second, etc., and wrap back around to ‘1’ for the sixth question.

Don’t worry, though: I answered all the questions truthfully, but Uber Air will never happen. The FAA won’t let this one fly, and no company will ever carry passengers without a licensed pilot on board.

Hey, it’s sometime between Black Friday and Cyber Monday. We’re blowing out everything in the Hackaday Store. There’s some great deals in there. Tindie, our lovable robot dog is also heading up hundreds of Tindie deals for Cyber Monday. If you want some electronic stuff direct from the people who make it, this is the sale to check out.

Looking for some other Black Friday/Cyber Monday sales? Adafruit has compiled a list of retailers so I don’t have to. Thanks, Phil. There are deals from Lulzbot to Makerbot, LittleBits to Sparkfun.

The engineer responsible for Dieselgate has been sentenced to 40 months in prison. There are two takeaways from this: 1) The Nuremberg Defense doesn’t work. 2) Don’t build a business plan around breaking the law, despite what the libertarian hellscape of Hacker News tells you.

The theme for next year’s DEF CON has been announced. It’s, “1983”. What does that mean? Brutalist architecture, first of all. They’re also going for a ‘year before 1984’ thing, where everyone installs always-on, far-field microphones in their house and connects them to the Internet. In other news, Alexas and Google Homes are on sale this Black Friday. Big props for the official DEF CON style guide with typefaces and colors, though.

Over on Hackaday.io, [Frank] has created a very interesting and very cool game for the Vectrex. It’s called Bloxorz, and you can think of it as a cross between Marble Madness and Q*Bert. It’s a puzzle game, and now it’s a project on Kickstarter. Want to check out what this game looks like? Take a look at the video. It’s big into the tradition of early-90s puzzle games (a genre we wish would come back), and if I had a Vectrex, I’d buy one.

I told you SparkleCon tickets are on sale, right?

Here’s an argument you can settle. What is the grit designation of sandpaper? Sandpaper comes in various grits, from 60 (very coarse) to 1500, 2000, and 6000 (for polishing, basically). Here’s a question: how are these numbers derived? I have a vague memory from my youth where someone who probably didn’t know what they were talking about said grit sizes are the number of abrasive particles per some unit of area. A 60-grit sandpaper would have sixty particles of aluminum oxide per square quarter inch, for example. This sounds too stupid to be correct, doesn’t fit with the mesh sizes of different grades of sandpaper, and a cursory Googling does not tell me how sandpaper grit sizes are derived. What say you, Hackaday peanut gallery? Where do the numbers on the back of a sheet of sandpaper actually come from? 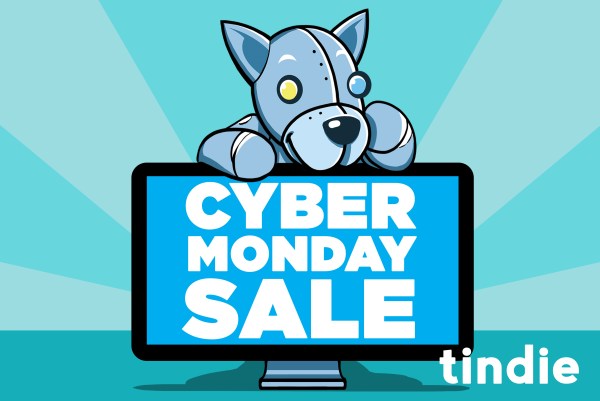 The holiday season is upon us, so you know what that means. It’s time to consume! Whether that means large quantities of carbohydrates or consumer electronics, ’tis the season to buy, buy, buy.

Hundreds of Tindie items are on sale right now, and everyone will find something unique, cutting edge, and sold by the people who designed it. Tindie is artisanal electronics with a cute robot dog mascot. It can’t get any better than that.

These discounts are offered by the great DIY hardware creators themselves, the ones who are making cool stuff that you want. What’s that, you say? It’s neither Black Friday nor Cyber Monday right now? It doesn’t matter, this sale started on Black Friday and will last until at least Mail Order Tuesday.

What’s cool on Tindie? Everything! There are button breakouts for old-school brick Game Boys, space chicken stickers from the guy that built the ESP8266 Deauther, a tiny digital audio player, track ocean vessels with the dAISy AIS receiver, or learn to solder with this blinky fire engine kit.

If you’re looking for even more deals, the Hackaday Store is blowing out everything. It’s a literal fire sale after I suggested deep frying the bird this year.

Score everything in the Hackaday store for 50% off right now.

Today is Thanksgiving in the United States, a time when people migrate back home to spend time with families, fill themselves with Turkey and cranberry sauce, and are inevitably dragged out to the big box stores in search for that one great deal to satisfy their consumer urge.

Whether you observe the holiday or not, you can grab some geeky stuff from the Hackaday Store without the early rise or the need to be in a specific place. You’ll find a collection of some of our favorite hardware, sweet Hackaday apparel, and our beloved print goods sprinkled in. Give it a look. 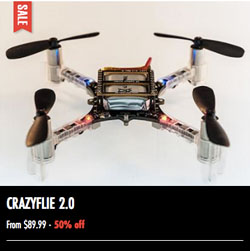 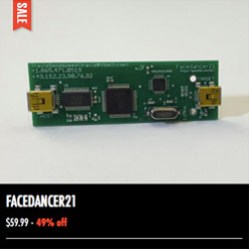 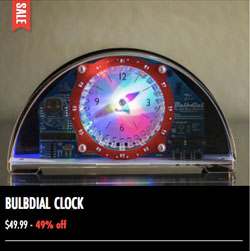 Fly a quad indoors with the CrazyFlie 2.0, impersonate USB devices with the Facedancer21, and have a blast with our favorite clock kit, the Bulbdial Clock. 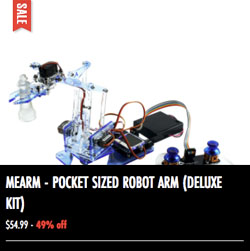 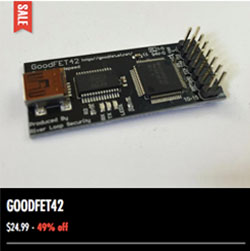 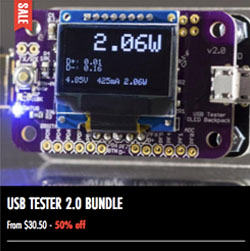 Assemble and program your own robotic MeARM, be the master of all things serial bus with the GoodFET42, and monitor the juice flowing to your USB device with the USB Tester 2.0. 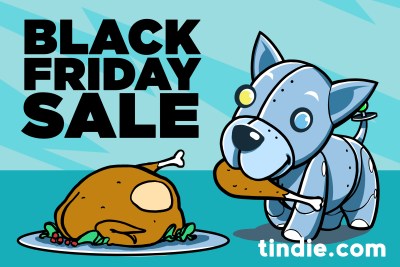 Hundreds of Tindie Items are also on sale this weekend. Tindie where you go to find unique and cutting edge hardware sold by those that designed it. Check out to the Tindie sale page for a complete listing of items going on sale now and throughout the weekend. 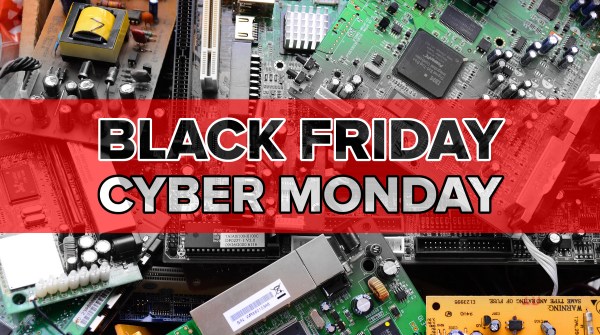 Between Black Friday, Cyber Monday, and, apparently for some just because it’s a long holiday weekend, hacker-licious sales abound right now. Here’s a run-down gathered from our intrepid Hackaday team who spared little effort in gathering this information. After all, being the hub of hackerdom, everyone just tells us this stuff. Be sure to check the actual details on the site because after reading about all these awesome opportunities to stock up for winter projects, our head is spinning. What to buy? What to give?

END_OF_DOCUMENT_TOKEN_TO_BE_REPLACED

Winter is coming, and it’s a great time to start accumulating parts and tools to keep you occupied with projects during the dark and cold days ahead.

We got a tip from Pololu about their planned Black Friday deals, and thought we’d check with some of the other parts suppliers that cater to the hobby market too. Here’s what we found:

We did hear back from SparkFun. They don’t have a Black Friday deal planned, but they are planning on Free Day 2012 happening some time early in the year! We’ll keep our eyes open for details, but if you hear about it before we do send us a tip.

Make also got back to us. No specific details about Black Friday, but we’re told they have some type of deals in the works.

Digikey and Mouser didn’t get back to us in time for this post.

Do you want a laser cutter to call your own? Yeah, so do we. If you come up with a really cool project perhaps you can win one. It looks like there’s  a contest going on right now that is giving one away to the grand prize winner.