As the most spendiest time of the year rapidly approaches, it’s good to know that your hard-earned money doesn’t have to go towards gifts that are probably still sitting in the dank holds of container ships sitting at anchor off the coast of California. At least not if you shop the Tindie Cyber Sale that started yesterday and goes through December 5. There’s a lot of cool stuff on sale, so it shouldn’t be too hard to find something; to sweeten the deal, Jasmine tells us that there will be extra deals going live on Black Friday and Cyber Monday. But wait, there’s more — follow Tindie on Twitter for bonus discount codes.

Blue is the old black, which was the new blue? At least when it comes to “Screens of Death” it is, since Microsoft announced the Windows 11 BSOD will revert back from its recent black makeover to the more familiar blue theme. You’ll have to scroll down a bit, perhaps three-quarters of the way through the list of changes. Again, the change seems completely cosmetic and minor, but we’d still love to know what kind of research went into making a decision like this.

From the “One Man’s Trash” department, we have a request for help from reader Mike Drew who picked up a bunch — like, a thousand — old tablet computers. They originally ran Windows but they can run Linux Mint just fine, and while they lack batteries and the back cover, they’re otherwise complete and in usable condition, at least judging by the pictures he shared. These were destined for the landfill, but Mike is willing to send batches of 10 — no single units, please — to anyone who can cover the cost of packaging and shipping. Mike says he’ll be wiping the tablets and installing Mint, and will throw in a couple of battery cables and a simple instruction sheet to get you started. If you’re interested, Mike can be reached at michael.l.drew@gmail.com. Domestic shipping only, please. Here’s hoping you can help a fellow hacker reclaim a room in his house.

Answering the important questions: it turns out that Thanos couldn’t have snapped half of the universe out of existence after all. That conclusion comes from a scientific paper, appearing in the Journal of the Royal Society. While not setting out to answer if a nigh-invulnerable, giant purple supervillain could snap his fingers, it’s pretty intuitive that wearing any kind of gloves, let alone a jewel-encrusted metal gauntlet, makes it hard to snap one’s fingers. But the mechanics of snapping is actually pretty cool, and has implications beyond biomechanics. According to the paper, snapping is actually an example of latch-mediated spring actuation, with examples throughout the plant and animal kingdoms, including the vicious “one-inch punch” of the tiny mantis shrimp. It turns out that a properly executed human finger snap is pretty darn snappy — it takes about seven milliseconds to complete, compared to 150 milliseconds for an eye blink.

And finally, it seems like someone over at Id Software is a bit confused. The story began when a metal guitarist named Dustin Mitchell stumbled across the term “doomscroll” and decided that it would make a great name for a progressive thrash metal band. After diligently filing a trademark application with the US Patent and Trademark Office, he got an email from an attorney for Id saying they were going to challenge the trademark, apparently because they feel like it will cause confusion with their flagship DOOM franchise. It’s hard to see how anyone who lived through the doomscrolling years of 2020 and 2021 is going to be confused by a thrash metal band and a 30-year-old video game, but we suppose that’s not the point when you’re an attorney. Trademark trolls gonna troll, after all. 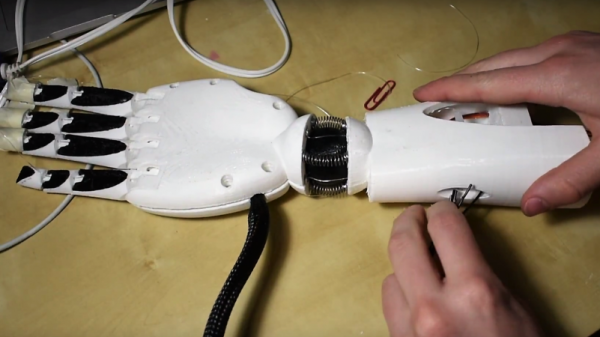 Is this a case of a good design gone wrong in the build phase? Or is this DIY prosthetic arm a poor design from the get-go? Either way, [Will Donaldson] needs some feedback, and Hackaday is just the right place for that.

Up front, we’ll say kudos to [Will] for having the guts to post a build that’s less than successful. And we’ll stipulate that when it comes to fully articulated prosthetic hands, it’s easy to fail. His design is ambitious, with an opposable thumb, fingers with three phalanges each, a ball and socket wrist, and internal servos driving everything. It’s also aesthetically pleasing, with a little bit of an I, Robot meets Stormtrooper look.

But [Will]’s build was plagued with print problems from the start, possibly due to the complex nature of the bosses and guides within the palm for all the finger servos. Bad prints led to creaky joints and broken servos. The servos themselves were a source of consternation, modified as they were for continuous rotation and broken apart for remotely mounting their pots in the hand’s knuckles. The video below relates the tale of woe.

There’s a lot to admire with [Will]’s build, but it certainly still has its issues. He’s almost to the point of other more successful DIY hand builds but just needs a little help. What say you in the comments line? END_OF_DOCUMENT_TOKEN_TO_BE_REPLACED

Touched is a project by [Rebecca Strauss] that integrates servos, strings, and felt into a horrifying kinetic sculpture made up of a dozen mechanical fingers straight from a Boschian nightmare.

After covering them in felt, [Rebecca] wrapped conductive thread around each of the fingers. When some of the fingers are touched, they all recoil as if controlled by a demon living just under a mountain of felt.

[Rebecca] brought in another kinetic sculpture using her servo controlled fingers; in the video up at the top and after the break, you can see the inner workings of this floor-mounted version. When the IR proximity sensor goes off, the fingers recoil but can be coaxed out again by gently stroking one of the phalanges.

END_OF_DOCUMENT_TOKEN_TO_BE_REPLACED [Mazvydas] shares with us, his cheap robot hand. He was inspired by this project, where someone used an Arduino and a glove with some flex sensors to control a pre-made hand. He wanted to go a little more DIY though. He chose a picaxe microcontroller and constructed the hand himself out of twine, some plexi-glass, and some rubber hose. He does ultimately plan on adding glove control as well.

END_OF_DOCUMENT_TOKEN_TO_BE_REPLACED

We’re filing this one under “best interface implementation”. This robot is controlled by finger gestures on the surface of an iPod Touch. It can walk forward, turn, sidestep, jump, and kick a ball based on the input it receives from your sweaty digits. Unlike vehicles controlled by an iPhone (or by Power Wheels), this has some potential. Especially considering the inevitable proliferation of multi-touch devices in our everyday lives.

The race for the next revolutionary input design is an ongoing event. [Clayton Miller’s] newest offering in the contest is a multitouch concept that separates the display from the screen and is meant to utilize all fingers. His video explanation includes a description of the physical input device, a software implementation, and a demonstration of how a finished system will work. After the break we’ll look at the hardware, the software, and the concept video. END_OF_DOCUMENT_TOKEN_TO_BE_REPLACED