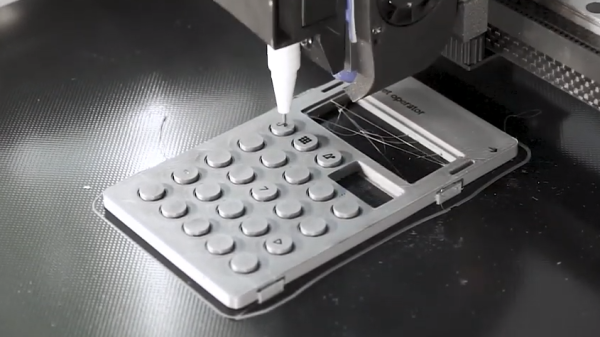 Tool changing on 3D printers is hot right now, and it’s going to be really interesting to see the ideas that reliable tool changing lets people try out. One such idea is having the 3D printer use a marker to label the enclosure and buttons it just 3D printed.

The 3D print shown is an enclosure for a Pocket Operator by Teenage Engineering. [Marc Schömann] made the enclosure on Blackbox, a tool-changing 3D printer that he designed. The video below shows a pen holder drawing the labels directly onto the printed object. Pocket Operators may look like calculators, but they are clever electronic musical devices capable of producing real music. (The best way to learn about what they are and what they can do is to watch a tutorial video or two.)

END_OF_DOCUMENT_TOKEN_TO_BE_REPLACED 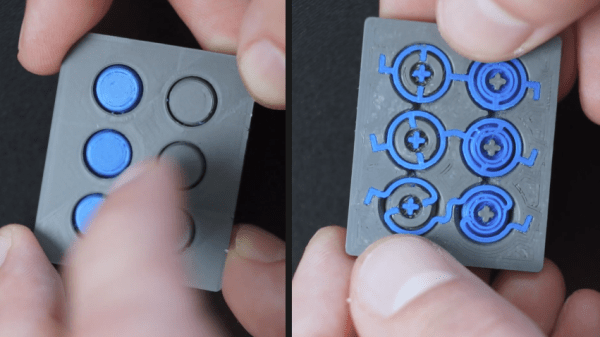 These nifty buttons come from [Marc Schömann], and they are intended to cover just about any kind of tact switches. The buttons, their cover, and the compliant bits that act as a spring can be 3D printed as a complete unit that requires no assembly, and can be used fresh off the print bed. 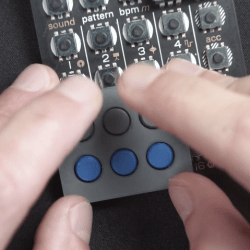 The design is still being developed, but those interested in playing with it can download the current model here. [Marc] printed this version in two colors, but that’s just to make how the buttons work easier to see. It also gave him an opportunity to test and tune the tool changer on his printer.

Tool changer, you say? Yes, indeed. The printer is the Blackbox, a open source, tool-changing 3D printer of [Marc]’s own design with its own Hackaday.io project page.

Embedded below is a video overview of the button design being prepped and printed on a Blackbox printer, with a tool change happening in the process. Tool changing is an attractive feature that many people including E3D have taken a swing at, and it’s always exciting to see it in action.

END_OF_DOCUMENT_TOKEN_TO_BE_REPLACED 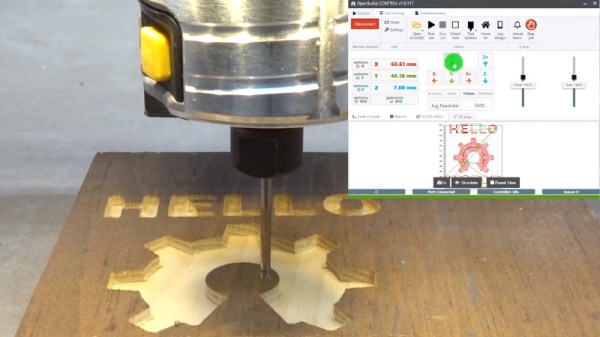 If you’re reading Hackaday, you’ve probably heard of OpenBuilds. Even if the name doesn’t sound familiar, you’ve absolutely seen something on these pages that was built with their components. Not only is OpenBuilds a fantastic place to get steppers, linear rails, lead screws, pulleys, wheels, and whatever else you need to make your project go, they’re also home to an active forum of people who are passionate about developing open source machines.

As if that wasn’t enough reason to head over to the OpenBuilds website, [Peter Van Der Walt] recently wrote in to tell us about some new free and open source software he and the team have been working on that’s designed to make it easier than ever to get your creations cutting, lasing, milling, and whatever else you could possibly imagine. If you’ve got a machine that moves, they’ve got some tools you’ll probably want to check out.

“OpenBuilds CAM” is a web-based tool which imports SVG and DXF files and creates toolpaths for all sorts of cutting, whether your machine does the business using a beam of angry photons or a simple drag knife. The resulting GCode can then be plugged into “OpenBuilds CONTROL”, which as you may have guessed, does the actual controlling of the piece of hardware connected to your computer. There’s no worries about vendor lock in here either, CONTROL will talk to any Grbl-compatible board.

But what if you don’t have a board? Well, it just so happens that OpenBuilds offers a very slick new piece of gear they’re calling the BlackBox. This beefy CNC controller includes a laundry list of features that [Peter] says the team is very excited about, including stepper drivers powerful enough to run NEMA 23 motors. As an interesting note, they’ve actually made the enclosure for the BlackBox out of cleverly solder masked PCBs; a fantastic trick we don’t see often enough.

The video after the break shows the CNC router version of “Hello World” using CAM and CONTROL, and should give you a pretty good idea of the typical workflow. If it looks familiar to you, it might be from our previous coverage of LaserWeb, a similar web-based project spearheaded by [Peter Van Der Walt] a few years back. END_OF_DOCUMENT_TOKEN_TO_BE_REPLACED