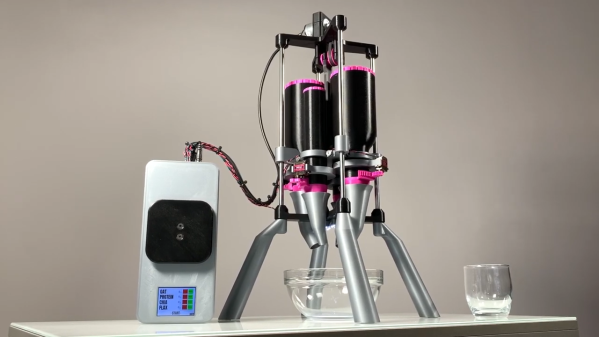 In historical times, before the pandemic, most people had to commute to work in the mornings, and breakfast often ended up being a bit rushed. [Elite Worm] is very serious about getting his breakfast mix exactly right, and o shave a bit of time off the prep, he built a 3D printed automatic ingredient dispenser for his breakfast bowl.

[Elite Worm] breakfast consists of four ingredients, that have either a powder or granular consistency. They are held in 3D printed hoppers, with a screw top for refilling and a servo-operated door with a funnel at the bottom. The hoppers need to be shaken to properly dispense the ingredients, so all four are mounted on a bracket that can slide up and down on linear bearings. The shaking is done by a brushed DC motor with a slider-crank mechanism, which moves bracket and hoppers up and down very vigorously. [Elite Worm] notes that the shaking is probably a bit too violent and can make the entire table shake if it isn’t sturdy enough, and reducing the motor RPM might be a good idea. Below the hopper system sits a movable weighing station with a load cell, a custom ATmega328P based control board and a Nextion touch screen display, which allows for various ingredient combinations to be saved. The load cell is used to keep track of the ingredient quantities by weight, as they are dispensed one at a time.

We really like the ingenuity of the build, but personally, we would have swapped out the hopper for something that’s moulded, since all the crevices in 3D printed parts is a perfect place for bacteria to grow and can be tricky to clean properly END_OF_DOCUMENT_TOKEN_TO_BE_REPLACED 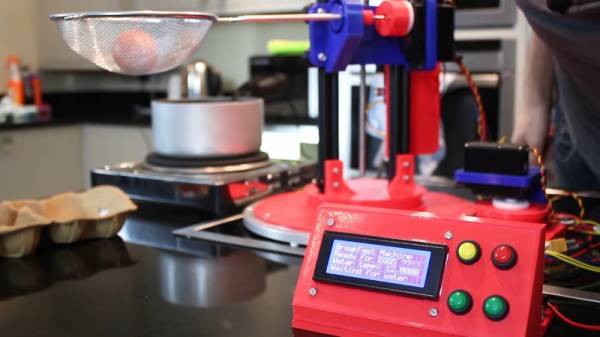 Breakfast is a meal fraught with paradoxes. It’s important to start the day with a hearty meal full of energy and nutrition, but it’s also difficult to cook when you’re still bleary-eyed and half asleep. As with many problems in life, automation is the answer. [James Bruton] has the rig that will boil your egg and get your day off to a good start.

The basic apparatus uses a thermostatically controlled hotplate to heat a pot of water. [James] then employs an encoder-controlled linear actuator from a previous project to raise and lower a mesh colander into the pot, carrying the egg. An Arduino is used to measure the water temperature, only beginning the cooking process once the temperature is over 90 degrees Celsius. At this point, a 6-minute timer starts, with the egg being removed from the water and dumped out by a servo-controlled twist mechanism.

Future work will include servo control of the hotplate’s knob and building a chute to catch the egg to further reduce the need for human intervention. While there’s some danger in having an automated hotplate on in the house, this could be synchronized with an RTC to ensure your boiled egg is ready on time, every day.

Breakfast machines are a grand tradition around these parts, and we’ve seen a few in our time. Video after the break.

END_OF_DOCUMENT_TOKEN_TO_BE_REPLACED 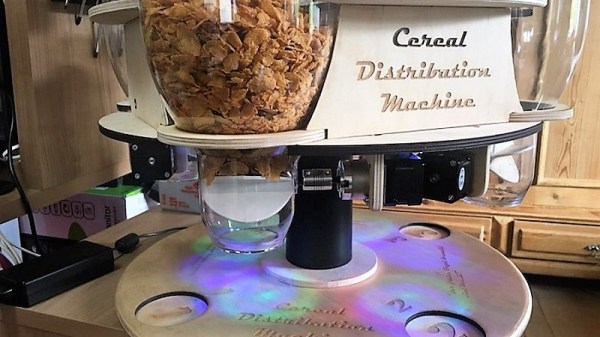 END_OF_DOCUMENT_TOKEN_TO_BE_REPLACED

Breakfast is a meal taken very seriously indeed by Brits. So seriously that continual attempts have been made to perfect the experience mechanically. Who could not delight to be woken up by a Teasmade alarm clock delivering a fresh cup of hot beverage, and where else would the getting out of bed sequence in Wallace and Gromit be, not the comedic animated film, but a documentary?

Latest in a long line of British builders of mechanical morning repast generators are [Peter Browne] and [Mervyn Huggett]. Working from a garden shed – where else! – in Sussex, they have spent three months and a thousand man hours creating their “Sunday Morning Breakfast Machine“, designed to cook and serve a slice of toast and a boiled egg alongside a cup of tea or coffee and the morning paper. Prototyping was done in Meccano , could there be any other medium for a machine like this one?

The machine itself is a mix of the practical and the whimsical. The giant-sized facsimile of a vintage Ever Ready battery and the toy rooster hide some pretty accomplished metalwork and control systems. They do admit that the primary purpose is to make people laugh, but it does the job, albeit with what looks like a leak from a cracked egg.

A full description from [Peter] is in the video below the break.

END_OF_DOCUMENT_TOKEN_TO_BE_REPLACED 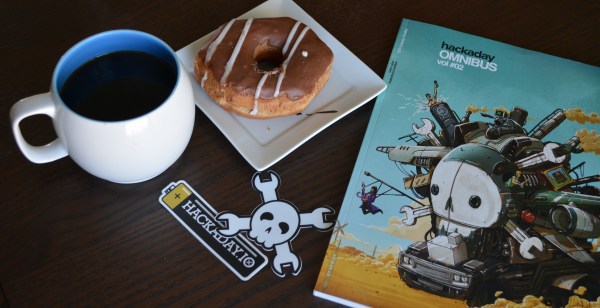 This weekend is ShmooCon, a hacker convention held in Washington DC. Brian Benchoff and I will be there, both of us for the first time. We’d love your input on what talks look the most interesting. Check out the schedule of speakers, then leave a comment below to let us know which talks you think we should cover.

It’s great hearing the big presentations, but I find a lot of times great hacks can be found in smaller venues, or just by walking around. Two examples from 2015 DEF CON: the best talk I sat in on had about 10 people spectating in the IoT village, and I had a great time trying to track down everyone who had an unofficial hardware badge. If you’re at ShmooCon and have something to show off, please find us (@szczys, @bbenchoff)!

On Saturday join us for a Hackaday meetup in the lobby of the Washington Hilton. ShmooCon is well-regarded for the quality of its “lobby-con”, what better place to gather? Look for the Hackaday crowd starting Saturday 1/16 at 8:45am. We’ll bring the donuts, and some swag like Hackaday Omnibus Vol. 02 and of course, some Jolly Wrencher stickers. You’ll probably lose your appetite after watching part one and part two of Artisans Asylum as they Take on the Machine. Based around the Wallace and Gromit “automated” set of contraptions, the team from Boston set out to make their own breakfast machine. Of course, with only three weeks to work it didn’t exactly turn out as planned. They certainly had some good ideas though, and we were amazingly impressed at their egg cracking machine. But in the end, we wouldn’t want to be first in line for a plate of breakfast. Next is the final team, The Transistor, who will be making a live action zombie video game. 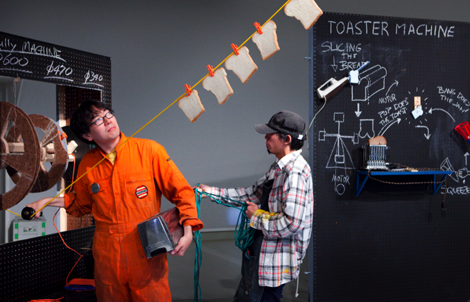 A lot of us skip breakfast in the morning, be it because we don’t have time to make something, don’t have the patience, or for some other reason. Yuri Suzuki and Masa Kimura are aiming to make your breakfast a little easier, a little quicker, and a lot more interesting. Their latest project is a Rube Goldberg-like machine that does everything from fry your eggs to brew your coffee. The coolest part about this project is it was built with the help of the public. The two designers put out an open invitation for people to come help in constructing the device at Platform21, a publicly accessible design forum in Amsterdam. Now if someone would tie this into an alarm clock, we could all wake up to the smell of toast and coffee instead of the super loud 140db alarm clock or the confusing (albeit effective) wake up machine.