It is hardly news that you can use your smart phone as a really crummy oscilloscope. You can even use it as an audio frequency signal generator. There are also plenty of projects that allow you to buffer signals going in and out of your phone to make these apps more useful and protect your phone’s circuitry to some degree. What caught our eye with [loboat’s] phone oscilloscope project was its construction.

END_OF_DOCUMENT_TOKEN_TO_BE_REPLACED 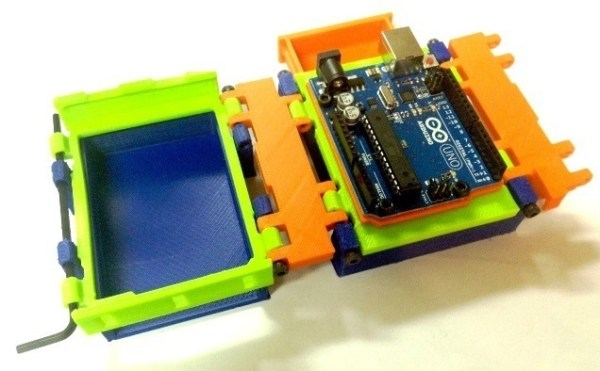 There are sure a lot of varieties of Arduinos out there but there may even be more of a variety when it comes to Arduino Cases. Let’s take the most popular Arduino form factor, the Uno. Below are a handful of unique cases for the Uno-sized boards. We’ll call this one robust. Although it is 3D printed, its intent is to be extremely protective of the inhabitant. Some extra thought went into this case, no tools are needed! After the Arduino snaps into place, so does the cover. There is an access door to get the input/output wires to the free world. [Megaduty] suggests that this contains $0.10 of plastic. Not a bad deal.

END_OF_DOCUMENT_TOKEN_TO_BE_REPLACED This build started off as a coffee table that was to have an oval glass top (no word if the edges were going to be blue or orange). The guts of the cube are taken from a 400 Watt sub. As any good sub builder would, [Cube] kept the air volume and port tuning of the donor box.

We’ve seen a companion cube sub before that featured EL wire for a ‘glowing cube’ effect, but [Cube] may have taken things a little too far by including glowing rings on each side of the cube. The rings lit by 2,500 LEDs mounted on pieces of perspex and wired point-to-point. While [Cube] claims he’s ‘not a electronics guru,’ he certainly has a lot of patience to assemble those lights.

Check out [Cube]’s YouTube build video after the link. Credit to [Todd] for sending this one in.

END_OF_DOCUMENT_TOKEN_TO_BE_REPLACED

Reminiscent of [Ben Heck]’s portable and laptop console mods, [Bandit5317] over at Xbox-Scene managed to fit the guts of an original Xbox into a custom-built slim case that measures just 2.5 centimeters thick. In his post, he describes some of the difficulties of cutting down a behemoth Xbox to a third of its original size, such as rewiring a custom IDE cable to avoid the extra 1/16-inch it would take to fold a standard one. The case is hand-crafted, (no laser cutter!) no-frills box made of painted polycarbonate, and man is it sexy. It is built off of a v1.4 motherboard running a third-party BIOS and with a 320GB laptop hard drive. Load up XBMC Media Center and you’ve got the slimmest home theater PC on the block.