Is there anything more satisfying than building a useful machine from mostly junk? We think not. [ke4mcl] is a big fan of reusing and repurposing things before settling for the recycle bin, and was in the market for a vibratory parts tumbler to quickly clean off old, rusty bits and bobs in the course of repairing old electronics. For just $10, most of which went into a new tube of RTV silicone, [ke4mcl] built their own tumbler and came away with a reusable amplifier setup in the process.

We’ve all seen speaker cones dance, and they are definitely our favorite way to observe non-Newtonian fluids. This old woofer can still move, so it’s got a second life shaking sand and screws around until they’re somewhat shiny. The ideal woofer for this purpose has a rubber surround — that’s the ring that connects the speaker cone to the frame. [ke4mcl]’s foam-surrounded woofer works just as well, though it may not last as long.

After scrounging a container with a screw-top lid that fits the woofer perfectly, [ke4mcl] joined them together with a bead of RTV silicone. Since there weren’t any amplifiers lying around, [ke4mcl] spent a few bucks on a class D amplifier board and found a spare laptop brick to power it. An old phone with a tone generator app gets the sand churning with a friendly sine wave, which you can see in the videos after the break.

We think it’s particularly nice to keep things like fire extinguishers out of the landfill. If you don’t need a parts tumbler, why not use one to make your own refillable, re-pressurizable solvent container?

END_OF_DOCUMENT_TOKEN_TO_BE_REPLACED 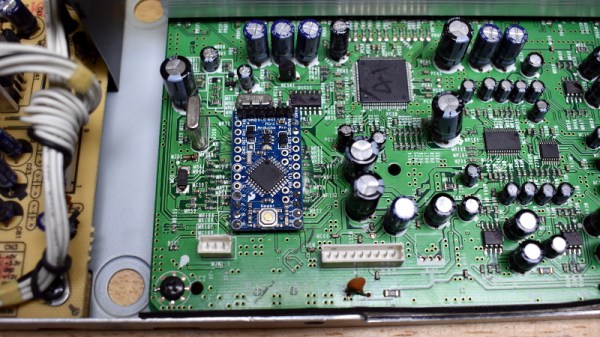 The Samsung PS-WTX500 subwoofer is designed to be used as part of a 5.1 channel home theater system, but not just any system. It contains the amplifiers for all the channels, but they’ll only function when the subwoofer is connected to the matching receiver. [Alejandro Zarate] figured there must be some way to unlock the system’s full functionality without being limited to the original receiver, he just needed to reverse engineer how the subwoofer worked.

The result is a fantastically well documented write-up that covers the whole process, starting with how [Alejandro] identified and researched the Pulsus PS9829B Digital Audio Processor (DAP). Documentation for this particular chip seems hard to come by, but he was able to find a similar chip from the same manufacturer that was close enough to put him on the right track. From there, he started studying the SPI communications between the DAP and the subwoofer’s S3P70F4 microcontroller.

After analyzing the communication between the two chips, [Alejandro] pulled the S3P70F4 off the board and wired an Arduino Pro Mini 328 in its place. The Arduino was quite a bit larger than the original microcontroller, but with some careful wiring, he manged a very professional looking installation. Short of coming up with a custom PCB adapter, we don’t think it could look much better.

With some relatively straightforward code and a listing of the captured byte sequences, the Arduino was able to power up the PS-WTX500’s amplifiers and handle the incoming audio signal as a stand-alone device.

In the past we’ve seen a similar trick done with the ESP8266, which had the added benefit of enabling WiFi control of the speakers. We’re all for adding modern functionality to older hardware, even if you’ve got to hang it off the back as an external module.

END_OF_DOCUMENT_TOKEN_TO_BE_REPLACED 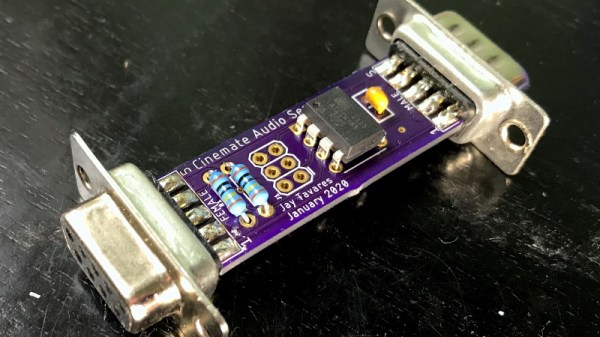 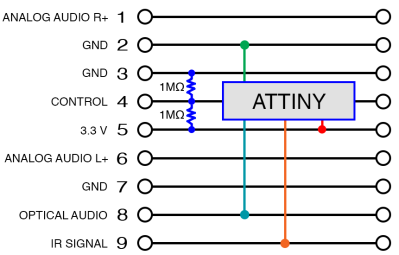 If you’re a fan of action movies or dance music, you’ll probably be familiar with sub-bass. The moment in those James Bond explosions that thuds through your chest in the movie theatre? That’s the product of a large subwoofer, a tuned pipe housing a speaker working somewhere just above the lower limit of human hearing, in the tens of Hz.

But what about sound below the range of human hearing, below 20Hz? You can’t directly hear infrasound, but its presence can have a significant effect on the experience of the listener. [Mike Michaud] was interested in this phenomenon for his home movie setup so built himself an infrasonic subwoofer tuned to 17Hz. Since the resulting cabinet was rather large he disguised it as a vintage UK police telephone box that you’d hardly notice in his basement theater.

A resonant 17Hz speaker horn is a rather inconvenient size for a home theatre, at about 25 feet long. Fortunately there is no need for the horm to be straight, it can be folded into a more convenient enclosure, and that is what [Mike] has done. He used a design published by [lilmike], which folds the horn three times into a more manageable size.

Speaker cabinet construction requires attention to the choice of materials as well as to the driver unit itself, so [Mike] goes into detail on the materials he rejected and his selection of a particular brand of subfloor ply.

He rates the resulting speaker as incredible. His driver is rated for 500 watts but he only has an amplifier capable of serving 100, even with that power he fears for his basement windows. He describes the noise made by the feet of the robots in War Of The Worlds as “little earthquakes” and the general effect as very menacing.

We’ve featured quite a few subwoofers on Hackaday over the years, though with the exception of this rotary device they have mostly been for more conventional sub-bass applications. Here for example is another folded horn. So if sub has become rather run-of-the-mill for you all, how about using it to be entertained by this vortex cannon? 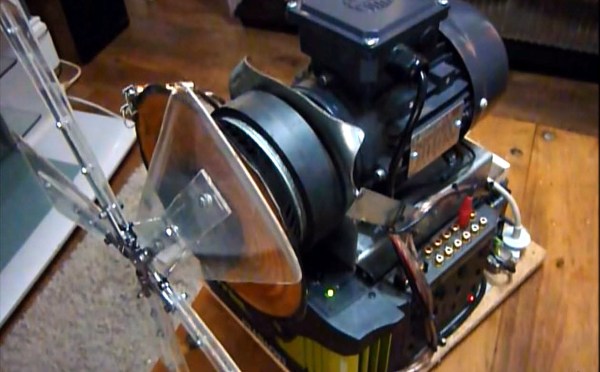 What happens when you combine a fan with a sub-woofer? Apparently, you get a high-efficiency ultra low hertz (3-5hz) rotary subwoofer!

First thing’s first, believe it or not, these things really do exist. [Chris] got the idea to build his own after seeing the TRW-17, a commercial offering of a rotary subwoofer.

The concept is pretty simple. If you use a giant subwoofer, you can get low frequency response, but it uses an immense amount of power to move a giant speaker coil. So what if you put something on a smaller speaker coil to increase airflow? Like, a fan or something?

END_OF_DOCUMENT_TOKEN_TO_BE_REPLACED 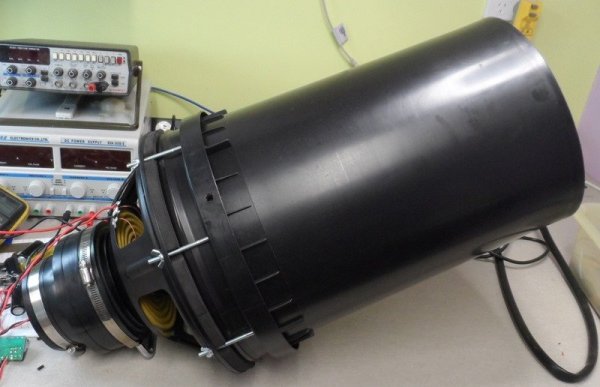 Need a cool toy for your kids? How about something with a bunch of fun fluid dynamics and a tinge of higher-than-average-voltage danger? Did we mention the subwoofer and bank of high-voltage capacitors? Have we got the project for you: [Robert Hart]’s vortex cannon design.

We’ve seen vortex cannons before, where you usually fix a balloon to the back of a trash can. Pull on the balloon membrane and then let it go with a snap, and it sends out a swirling donut of high-pressure air that travels surprisingly far. It’s like smoke rings, but amped up a bit.

[Robert]’s addition is to bolt on a high-power subwoofer in place of the balloon’s rubber membrane, and generate the air pulse by dumping a capacitor bank into the speaker.

The circuit design is a bit more clever than we thought at first. The bottom half is a voltage inverter followed by a diode bridge rectifier that essentially makes 320V DC (peak) out of 12V, and stores this in four fairly large capacitors. A pushbutton activates a relay that dumps the capacitors through the speaker.

On top of the circuit is a -12V voltage inverter. Just before firing, the speaker is pulled back a little bit by applying this -12V to the speaker, and then the relay is triggered and the capacitors dump, shooting the speaker cone forward.

[Robert] is still developing and testing the device out, so if you’re curious or just want to say hi, head on over to Hackaday.io and do so! Be sure to check out his videos. The smoke tests are starting to look good, and we love the control box and high-voltage warning stickers.

[Boolean90] needed an amplifier for a subwoofer, and had a lot of parts sitting around in a scrap bin. His project, a Class D sub amp made out of scrap, is a great example of what you can build with the right know-how and a very large pile of junk.

With digital logic and PWM chips, a Class D amp is one of the simpler ways to get a lot of amplification easily in an efficient package. It’s really not that complicated; an audio signal is turned into a PWM’d square wave, this is sent out to a Mosfet bridge, and finally out to the speaker.

Most Class D amps have a switching frequency of hundreds of kilohertz to the Megahertz range, but since this is an amplifier for a subwoofer that has a cutoff frequency of about 1kHz, the switching frequency doesn’t need to be quite as fast. [Boolean] is using a 50kHz carrier frequency; it’s more than high enough to recreate low frequencies.

With the completed project, [Boolean] has an extremely loud amplifier that has around 75-150W of output power. The subwoofer is only rated for 200W, but with the volume [Boolean] is getting, this isn’t an amp he’ll be rebuilding anytime soon.