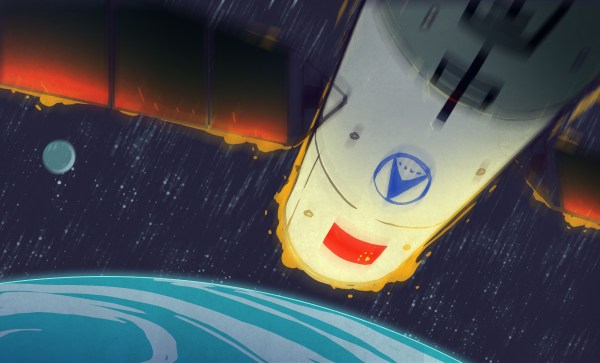 China’s first space station, Tiangong-1, is expected to do an uncontrolled re-entry on April 1st, +/- 4 days, though the error bars vary depending on the source. And no, it’s not the grandest of all April fools jokes. Tiangong means “heavenly palace”, and this portion of the palace is just one step of a larger, permanent installation.

But before detailing just who’ll have to duck when the time comes, as well as how to find it in the night sky while you still can, let’s catch up on China’s space station program and Tiangong-1 in particular.

END_OF_DOCUMENT_TOKEN_TO_BE_REPLACED [Wu Yulu] is a Chinese farmer with no formal mechanical training. He’s been building various contraptions over the years and even accidentally burned down his house at one point. Pictured above is a walking, talking rickshaw pulling robot he built to haul himself around town. You can see a video of the mechanical man on Reuters.

The design reminds us of [Bob Schneeveis]’ Schwarzenegger towed solar chariot we saw at Maker Faire.

[via DVICE thanks cnelson]