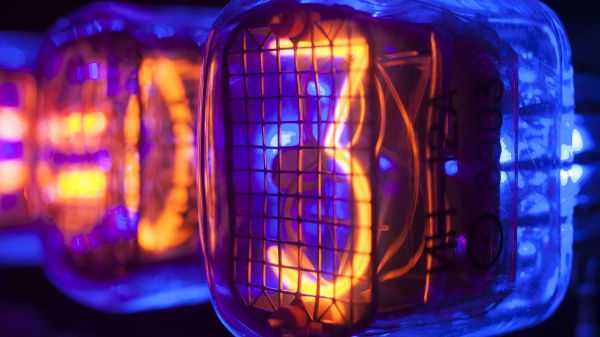 Join us on Wednesday, October 28th at noon Pacific for The Art of Nixies Hack Chat with Dalibor Farný!

When they were invented in the 1950s, Nixie tubes were a huge leap forward in display technology. In the days before affordable LEDs made seven-segment displays a commodity, there were few alternatives to the charming glow of the clear and legible characters inside Nixies. Sturdy and reliable, the cold-cathode displays found their way into everything from scientific instruments to test equipment, and even some of the earliest computers and the equipment that formed the foundation of the Space Race sported the venerable tubes.

But time marches on, and a display that requires high voltage and special driver circuits isn’t long for a world where LEDs are cheap and easy to design with. Nixies fell from favor through the late 1960s and 1970s, to the point where new tubes were only being made by the Russians, until that supply dried up as well. Rediscovered by hobbyists for use in quirky clocks and other displays, any stock left over from the Nixie’s heyday are quickly being snapped up, putting the tubes on the fast track to unobtainium status.

That’s not to say that you can’t get brand new Nixie tubes, of course. Artisanal manufacturers like Dalibor Farný have taken the Nixie to a whole new level, with big, beautiful tubes that are handcrafted from the best materials. Reviving the somewhat lost art of Nixie manufacturing wasn’t easy, but the tubes that Dalibor makes in a castle in the Czech Republic now find their way into cool clocks and other builds around the world. He’ll join us on the Hack Chat to dive into the art and science of Nixies, and what’s going on with his mysterious “Project H”.

Our Hack Chats are live community events in the Hackaday.io Hack Chat group messaging. This week we’ll be sitting down on Wednesday, October 28 at 12:00 PM Pacific time. If time zones baffle you as much as us, we have a handy time zone converter.

END_OF_DOCUMENT_TOKEN_TO_BE_REPLACED

[Andrew] built a light box for an exhibition last year that displayed different colors statically. After showing it off, it went unchanged but future improvements remained in the back of his mind. Recently, he pulled it out again and hacked together a controller to drive the colors individually.

He’s actually reusing some of the hardware he built for a different project. At its core is a PIC 16F628 that actuates the lights using relays. In this case, only four of the eight on the board are used to control red, white, blue, and green cold cathode tubes. The video after the break shows the device randomly rotating through different patterns. This is a nice start to making the piece more interactive and we can image adding web-controlled color changes, or perhaps some Daft Punk inspired functionality.