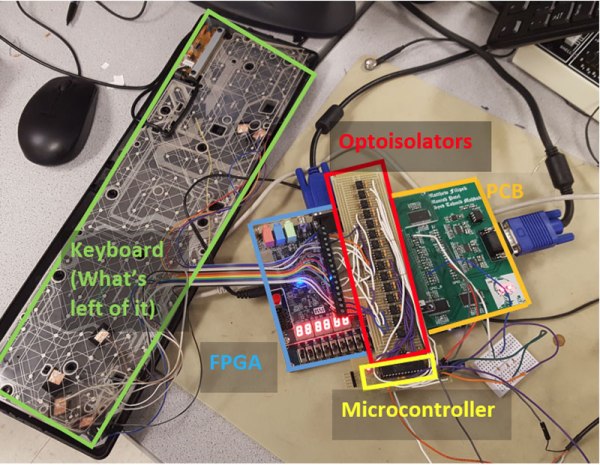 Some see gaming as the way to make AI work, by teaching computers how to play, and win, at games. This is perhaps one step on the way to welcoming our new gaming overlords: a group of Cornell students used an FPGA to win a computer cricket game. Specifically, they figured out how to use an FPGA to beat the tricky batting portion of the game in a neat way. They used an FPGA that directly samples the VGA output signal from the gaming computer, detecting the image of the meter that indicates the optimum batting time. Once it detects the optimum point to press the button, it triggers a hacked keyboard to press a button, whacking the ball to the boundary to score a six*.

END_OF_DOCUMENT_TOKEN_TO_BE_REPLACED 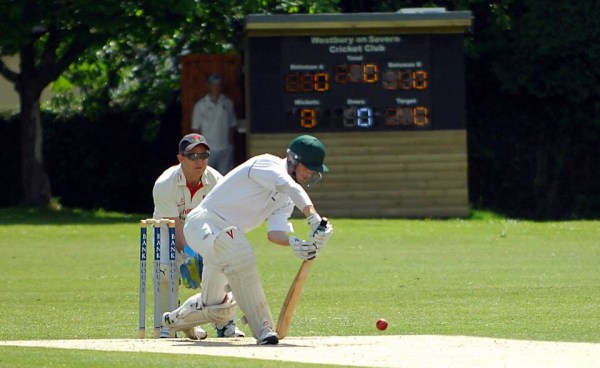 The game of cricket boggles most Americans in the same way our football perplexes the rest of the world. We won’t even pretend to understand what a “wicket” or an “over” is, but apparently it’s important enough to keep track of that so an English cricket club decided to build their own electronic scoreboard for their – pitch? Field? Help us out here.

This scoreboard build was undertaken by what team member [Ian] refers to as some “middle-aged blokes from Gloucestershire” with no previous electronics experience. That’s tough enough to deal with, but add to it virtually no budget, a huge physical size for the board, exposure to the elements, and a publicly visible project where failure would be embarrassingly obvious, and this was indeed an intimidating project to even consider. Yet despite the handicaps, they came up with a great rig, with a laser-cut acrylic cover for a professional look. A Raspberry Pi runs the LED segments and allows WiFi connections from a laptop or phone in the stands. They’ve even recently upgraded to solar power for the system.

And we’ll toot our own horn here, since this build was inspired at least in part by a Hackaday post. The builders have a long list of other links that inspired or instructed them, and we think that says something powerful about the hacker community that we’ve all been building – a group with no previous experience manages a major build with the guidance of seasoned hackers. That’s something to feel good about. 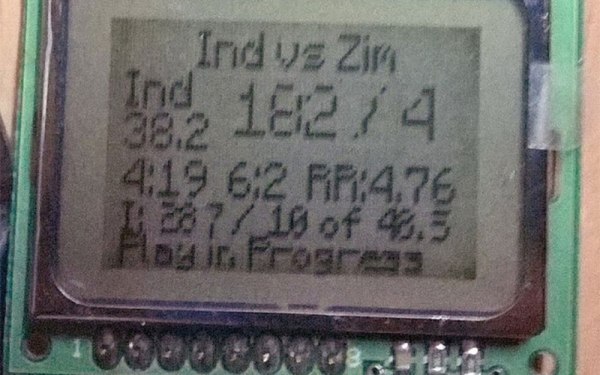 [Rohit Gupta] was looking for a stealthy way to keep up with the scores for his favorite game: cricket. Unfortunately, his office blocked access to most sites where he could watch the game, so he came up with a covert way to track the score on a small LCD screen. Using a Raspberry Pi and the web scraping program BeautifulSoup, he wrote a program that grabbed the score once a minute, and displayed it on a screen salvaged from a Nokia 5510 cell phone, driven through the Adafruit 5510 Python display library. Web scraping is a technique where a program grabs a web page, scrapes all of the content off it and processes it so only the data that is needed remains.

[Rohit] doesn’t name the web site that he scraped the score from, but there are two good reasons for that. Firstly, this hack relies on his office not blocking it, and secondly, many web sites frown on web scraping like this, as doing it too often can overload their servers, and you obviously don’t see the ads that the site is running. So, it is a technique that should be used with some caution. That aside, this is  a great example of a stealthy way to display information that you want to track, but without obnoxious (and obvious) alerts popping up on screen. And, given that cricket games can often go on for several days, that’s a good way to keep track of the game you love and keep your job.

Need a little primer on web scraping? Check out this guide.