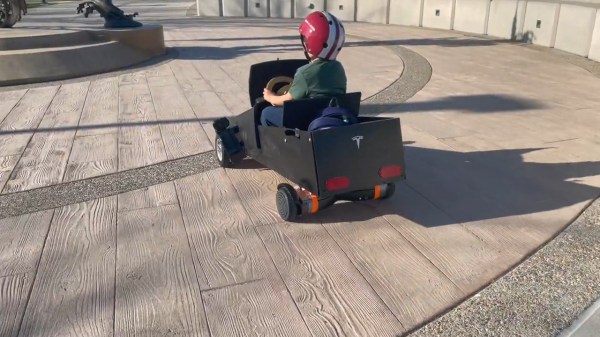 [Mahmut] tells us he’s also added a remote off switch as a safety feature, and we appreciate that. We’ve seen hoverboards in go-kart builds before, as well as rovers, e-bikes, robot vehicles, and even mobility platforms. Truly, the hoverboard is a unicorn of hacker transportation helpers.
END_OF_DOCUMENT_TOKEN_TO_BE_REPLACED 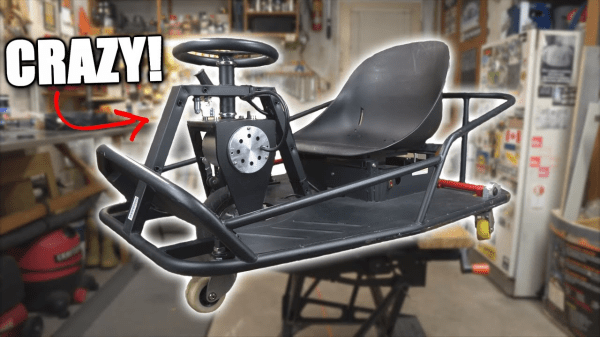 Why should kids have all the newfangled fun? They shouldn’t! Quarter-life crises are on the rise, and those who can are spoiling their inner child with adult-sized Heelys and electric Mario Karts that can drift. [austiwawa] finally got his hands on a used Crazy Cart XL, and while it’s incredibly fun, the puny 500W motor doesn’t quite satisfy his need for speed. A 3x power upgrade should do the trick.

The new 1600W motor is considerably bigger, so [austiwawa] had to grind off part of the front fork to make it fit. He designed a replacement motor support plate and had it cut from quarter-inch steel. Of course, you can’t just drop in a crazy new motor like that and go — you need a battery and controller to match. A couple of attempts and a new spot welder later, [austiwawa] built a 48V battery pack out of 18650s. The cart actually weighs less now, which should make the ride extra insane. Put a helmet on FFS and drift past the break to the build video and demo. Then watch him tear up the mean parking lots of Canada and take the kart off some sweet jumps.

We love a good fun-mobile around here, be it scratch-built or hacked OEM. This wasn’t even [austiwawa]’s first rodeo — check out his water-cooled electric drift trike.

END_OF_DOCUMENT_TOKEN_TO_BE_REPLACED

ScottCar is a go-kart for a special Kid and is [Alain]’s entry in this years Hackaday Prize. Will it race to victory?

The concept behind ScottCar is simple: There isn’t much out there for disabled kids when it comes to go-karts. [Alain Mauer] has an autistic son who isn’t quite capable of driving a Go-Kart as he would have trouble using pedals and brakes. He didn’t let that stand in his way, so he built a go-kart for his 11-year-old son. It incorporates an automatic braking system. In situations where the kart speeds up going down, brakes are automatically applied, slowing it down to a normal pace. It also features a remote emergency brake which would avoid crashes while supervising playtime. The braking system uses bike disc brakes controlled by an Arduino Nano. A Siemens Motor with a screw drive is what propels the vehicle, powered by a 12V Battery with a healthy 7.5Ah capacity.

The project is being released under GNU General Public License version 3, Will we be seeing ScottCar racing towards the Hackaday prize? 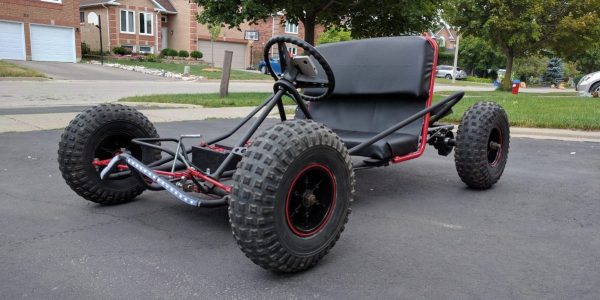 Growing up in the 70s and 80s, a go-kart was a quick ticket to coolness, second maybe to a mini-bike. In both cases, a welded steel tube frame and a cast-off lawnmower engine were all that stood between you and neighborhood glory. Looks like a couple of engineering students caught the retro juvenile delinquent bug and built this electric go-kart for their final project.

While the frame for [Adrian Georgescu] and [Masoud Johnson]’s build was a second-hand find, the powertrain is all custom. They targeted a power output of 3 kW but found no affordable motors in that range. So, in true hacker fashion, they rolled their own motor from a used Subaru alternator. The three-phase motor controller came from an electric scooter, three LiPo packs provide the juice, and a pair of Arduinos takes care of throttle control, speed sensing, and sending data to the virtual dashboard on an Android phone. Some lights and a snappy red and black paint job finished off the build. While the video below shows that the acceleration isn’t exactly neck-snapping in the Tesla style, the e-kart can build up to a good speed – 53 km/h. Not too shabby, and no deafening engine right behind your head.

If you’ve got the e-kart bug, best check out some of our previous posts, like this kart built from off-the-shelf components, or this four-wheel-drive mini-kart. Any way you build it, you’ll rule the cul-de-sac.

END_OF_DOCUMENT_TOKEN_TO_BE_REPLACED When you’re building an electric go kart, you really have two options. Convert a normal gasoline powered one by swapping out the power plant… Or build it from scratch! [Ganharr] opted for the for the latter to save some money, and to design it just the way he wanted.

Now you may have noticed it looks a bit small — because it is. It’s really more of a Micro-Kart, but that’s okay because [Ganharr] is winning a father-of-the-year award for building it for his kid!

It features two 2kW (~3HP) brushless electric motors, which independently drive the rear wheels. These are powered by two 48V 50A continuous (100A peak) speed controllers.[Ganharr] also spared no expense on the batteries, opting for a 48V lithium-ion pack composed of Headway cells (3.2V 15aH capacity each, 40152 type).  END_OF_DOCUMENT_TOKEN_TO_BE_REPLACED 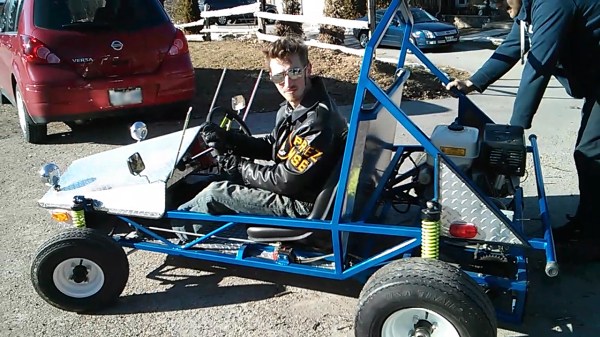 Believe it or not, the writers here at Hack a Day do their own projects too, we don’t just write about yours! I’ve just started a new project, and I want your advice! A few friends and I are converting a custom-made dune buggy — to electric.

The project will be chronicled over on Hackaday.io, with (hopefully) weekly updates on our progress. If you’ve been perusing Projects, you may have noticed my Electric Car conversion from a few years ago. First year of my engineering degree, my friend and I converted a 1993 Honda Del Sol to electric, using the guts of an electric forklift.

We got it going over 100km/h on used batteries our school donated to us. Unfortunately, there was a bit too much red tape and bureaucracy for us to get it on the road legally. That and we were poor university students who couldn’t afford new batteries, or the ridiculous amount insurance companies wanted to put it on the road. The project got scrapped after sitting in the backyard for a few years.

Fast forward to today, and we’ve both graduated and are working our “cushy” engineering jobs, and for the first time in our lives, we have some disposable income. We needed a new project to work on.

END_OF_DOCUMENT_TOKEN_TO_BE_REPLACED