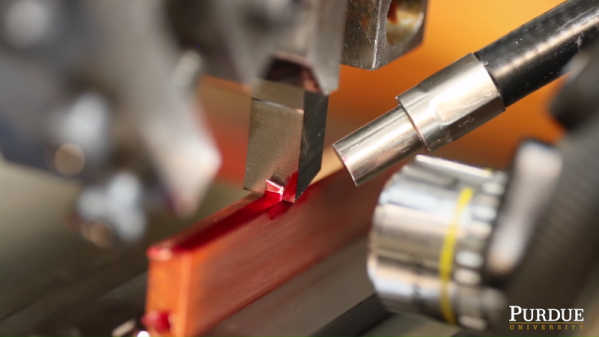 “Gummy” might not be an adjective that springs to mind when describing metals, but anyone who has had the flutes of a drill bit or end mill jammed with aluminum will tell you that certain metals do indeed behave in unhelpful ways. But a new research paper seeks to shed light on the gummy metal phenomenon, and may just have machinists stocking up on office supplies.

It’s a bit counterintuitive that harder metals like steel are often easier to cut than softer metals; especially aluminum but also copper, nickel alloys, and some stainless steel alloys. But it happens, and [Srinivasan Chandrasekar] and his colleagues at Purdue University wanted to find out why, and what can be done about it. So the first job was to get up close and personal with the interface between a cutting tool and metal stock, to observe the dynamics of cutting. In a fascinating bit of video, they saw that softer metals tend to fold in sinuous patterns rather than breaking on defined shear planes.

Having previously noted that cutting through Dykem, a common machinist’s marking fluid, changes chip formation in soft metals, the researchers tested everything from Sharpies to adhesive tape and even correction fluid, and found that they all helped to reduce the gumming action to some degree. Under their microscope they can clearly see that chips form differently once the cutting edge hits the treated surface, tending to act more brittle and ejecting rather than folding. They also noted a marked decrease in cutting force for the treated metal, and much-improved surface finish to boot.

Will Sharpies and glue sticks enter the book of old machinist’s tricks like gauge-block wringing? Only time will tell. But for now, this is a pretty fascinating bit of research that you might be able to put to the test in your shop. Let us know what you find in the comments.

END_OF_DOCUMENT_TOKEN_TO_BE_REPLACED

Dylan’s Candy Bar is an upscale sweet shop in Manhattan. In a stunning proof that 3D printing has become buzzword-worthy, they’ve announced a deal with Katjes Magic Candy Factory to bring four 3D gummy printers to the US (specifically, to New York, Chicago, Los Angeles, and Miami).

The device looks a bit like a classic 3D printer, but it extrudes eight different gummis in a variety of flavors. The store offers twenty designs but you can also print text or your own drawings (including, apparently, your face).

Each creation costs about $20. Time will tell if this is just a stunt, or if we are going to see food printers cropping up at a mall near you. You can see a video they posted to Twitter below along with a video from the product roll out of the printer in question.