The future of education is STEM, and for the next generation to be fitter, happier, and more productive, classrooms around the world must start teaching programming, computer engineering, science, maths, and electronics to grade school students. In industrialized countries, this isn’t a problem: they have enough money for iPads, Chromebooks, and a fast Internet connection. For developing economies? That problem is a little harder to solve. Children in these countries go to school, but there are no racks of iPads, no computers, and even electricity isn’t a given. To solve this problem, [Eric] has created a portable classroom for his entry into this year’s Hackaday Prize.

Classrooms don’t need much, but the best education will invariably need computers and the Internet. Simply by the virtue of Wikipedia, a connection to the Internet multiplies the efforts of any teacher, and is perhaps the best investment anyone can make in the education of a child. This was the idea behind the One Laptop Per Child project a decade ago, but since then, ARM boards running Linux have become incredibly cheap, and we’re getting to a point where cheap Internet everywhere is a real possibility.

To build this portable classroom, [Eric] is relying on the Raspberry Pi. Yes, there are cheaper options, but the Pi is good enough. A connection to online resources is required, and for that [Eric] is turning to the Outernet. It’s a system that will broadcast educational material down from orbit, using ground stations made from cheap and portable KU band satellite dishes and cheap receivers.

When it comes to educational resources for very rural communities, the options are limited. With [Eric]’s project, the possibilities for educating students on the basics of living in the modern world become much easier, and makes for a great entry into this year’s Hackaday Prize.

END_OF_DOCUMENT_TOKEN_TO_BE_REPLACED

Dylan’s Candy Bar is an upscale sweet shop in Manhattan. In a stunning proof that 3D printing has become buzzword-worthy, they’ve announced a deal with Katjes Magic Candy Factory to bring four 3D gummy printers to the US (specifically, to New York, Chicago, Los Angeles, and Miami).

The device looks a bit like a classic 3D printer, but it extrudes eight different gummis in a variety of flavors. The store offers twenty designs but you can also print text or your own drawings (including, apparently, your face).

Each creation costs about $20. Time will tell if this is just a stunt, or if we are going to see food printers cropping up at a mall near you. You can see a video they posted to Twitter below along with a video from the product roll out of the printer in question.

END_OF_DOCUMENT_TOKEN_TO_BE_REPLACED

Published only 3 days before our article on how it is high time for direct metal 3D printers, the folks at Harvard have mastered 3D metal printing in midair with no support (as well as time travel apparently). Because it hardens so quickly, support isn’t necessary, and curves, sharp angles, and sophisticated shapes are possible.

The material is silver nanoparticles extruded out of a nozzle, and shortly after leaving it is blasted with a carefully programmed laser that solidifies the material. The trick is that the laser can’t focus on the tip of the nozzle or else heat transfer would solidify the ink inside the nozzle and clog it. In the video you can see the flash from the laser following slightly behind. The extrusion diameter is thinner than a hair, so don’t expect to be building large structures with this yet.

If you want big metal 3D printing, you should probably stick to the welders attached to robotic arms.

END_OF_DOCUMENT_TOKEN_TO_BE_REPLACED

Commercially available motorized window blinds are a nice high-end touch for today’s automated home, but they tend to command a premium price. Seems silly to charge so much for what amounts to a gear motor and controller, which is why [James Wilcox] took matters into his own hands and came up with this simple and cheap wireless blind control.

[James] started his project the sensible way, with a thorough analysis of the problem. Once COTS alternatives were eliminated – six windows would have been $1200 – he came up with a list of deliverables, including tilting to pre-determined positions, tilt-syncing across multiple windows, and long battery life. The hardware in the head rail of each blind ended up being a Moteino on a custom PCB for the drivers, a $2 stepper motor, and a four-AA battery pack. The Moteino in one blind talks to a BeagleBone Black over USB and wirelessly to the other windows for coordinated control. As for battery life, [James] capitalized on the Moteino’s low-power Listen Mode to reduce the current draw by about three orders of magnitude, which should equate to a few years between battery changes. And he did it all for only about $40 a window.

Window blinds seem to be a tempting target for hacking, whether it’s motorizing regular blinds or interfacing commercial motorized units into a home automation system. We like how compact this build is, and wonder if it could be offered as an aftermarket add-on for manual blinds.

END_OF_DOCUMENT_TOKEN_TO_BE_REPLACED 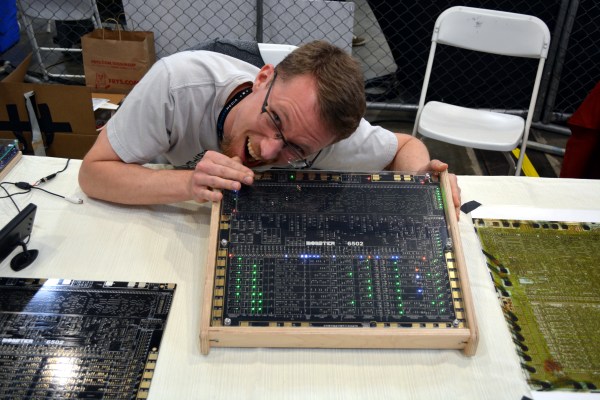 Here at Hackaday, we often encourage people to hack for the greater good through contests. Sure, it is fun to create a wireless barbeque thermometer or an electronic giant foam finger. At the end of the day, though, those projects didn’t really change the world, or maybe they just change a little corner of the world.

I recently saw a commercial device that made me think about how more hacker-types (including myself) ought to be working more on big problems. The device was Watly. The Italian and Spanish start up company claims the car-sized device is a “solar-powered computer.” No offense to them, but that’s the worst description for Watly that you could pick and still be accurate.

So what is Watly? It looks like some sort of temporary shelter or futuristic campsite equipment. However, it contains an array of solar cells and a very large battery. I know you are thinking, “Great. A big solar charger. Big deal.” But there’s more to Watly then just that.

The first Watly rolled out in Ghana, in Sub-Saharan Africa. About 67% of the population there–over 600 million people–do not have electricity. Nearly 40% do not have safe water. Watly uses a graphene-based filter and then uses its electricity to distill safe drinking water by boiling it. The company claims the device can deliver about 5,000 liters of safe drinking water per day.

If you read Hackaday, it is a good bet you have easy access to safe drinking water, electricity, and Internet. Think for a minute what it would be like if you didn’t. Here on the Gulf Coast of the United States, we sometimes have hurricanes or other storms that show us what this is like for a week or two. But even then, people come with water in trucks or cans. Generators show up to let you run your fridge for a few hours. Even more important: you know the situation is only temporary. What if you really thought those services would never be restored?

The portable device can provide power, water, and wireless Internet service and can last for 15 years. Watly intends to create a larger version with even more capacity.  The project received funding from the EU Horizon 2020 program that we’ve mentioned before. Creating clean water is something that can help lots of people. So is using less water. If you want some more inspiration for tackling water problems, we’ve got some links for you.