Back in 2013, [Karl Lautman] successfully got his kinetic sculpture Primer funded on Kickstarter. As the name implies, you press the big red button on the front of the device, and the mechanical counter at the top will click over to a new prime number for your viewing pleasure. Not exactly a practical gadget, but it does look pretty slick. 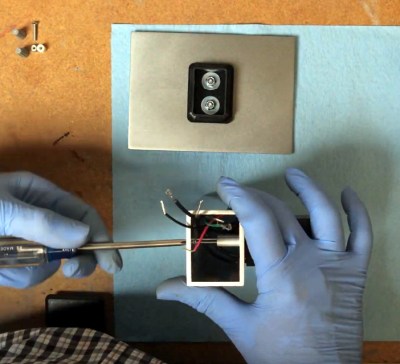 These days you can still by your very own Primer from [Karl], but he tells us that the sales aren’t exactly putting food on the table. At this point, he considers it more of a self-financing hobby. To illustrate just what goes into the creation of one of these beauties, he’s put together a time-lapse video of how one gets built from start to finish, which you can see after the break.

Even if you’re not interested in adding a mathematics appliance to your home, we think you’ll agree that the video is a fascinating look at the effort that goes into manufacturing a product that’s only slightly north of a one-off creation.

The biggest takeaway is that you really need to be a jack of all trades to pull something like this off. From milling and polishing the metal components to hand-placing the SMD parts and reflowing the board, [Karl] demonstrates the sort of multi-disciplinary mastery you need to have when there’s only one person on the assembly line.

Small scale manufacturing isn’t cheap, and is rarely easy. But stories like this one prove it’s certainly possible if you’re willing to put in the effort.

END_OF_DOCUMENT_TOKEN_TO_BE_REPLACED

A friend of ours here at Hackaday has an audacious design in the works that we hope will one day become a prototype that we can feature here. That day may be a little while coming though, because it has somewhere close to a thousand of the smaller SMD components in multiple repeated blocks on a modestly sized board, and his quote from a Chinese board house for assembly is eye-watering. He lacks a pick-and-place machine of his own, and unsurprisingly the idea of doing the job by hand is a little daunting.

We can certainly feel his pain, for in the past we’ve been there. The job described in the linked article had a similar number of components with much more variety and on a much larger board, but still took two experienced engineers all day and into the night to populate. The solder paste had started to spread by the end, morphing from clearly defined blocks to an indistinct mush often covering more than one pad. Our eyes meanwhile were somewhat fatigued by the experience, and it’s not something any sane person would wish to repeat.

Mulling over our friend’s board and comparing it with the experience related above, are we on the edge of what is possible with hand pick-and-place, or should we be working at the next level? Board assembly is a finely judged matter of economics at a commercial level, but when at a one-off personal construction level the option of paying for assembly just isn’t there, is there a practical limit to the scale of the task? Where do you, our readers, draw the line? We’d love to hear your views.

Meanwhile our friend’s audacious project is still shrouded in a bit of secrecy, but we’ll continue to encourage him to show it to the world. It’s not often that you look at a circuit diagram and think “I wish I’d thought of that!”, but from what we’ve seen this fits the category. If he pulls it off then we’ll bring you the result. Does your bicycle master boardwalk and quagmire with aplomb? If it was built by the Raleigh Bicycle Company, it ought to. This week’s Retrotechtacular is a 1945-era look into the start-to-finish production of a standard bicycle. At the time of filming, Raleigh had already been producing bicycles for nearly 60 years.

The film centers on a boy and his father discussing the purchase of a bicycle in the drawing office of the plant where a bicycle begins its life. The penny-farthing gets a brief mention so that the modern “safety model”—wherein the rider sits balanced between two wheels of equal size—can be compared. The pair are speaking with the chief designer about the model and the father inquires as to their manufacturing process.

We are given the complete story from frame to forks and from hubs to handlebars. The frame is forged from high-quality steel whose mettle is tested both with heat and with a strain much greater than it will receive in manufacture or use. It is formed from long pieces that are rolled into tubes, flame sealed at the joint, and cut to length. The frame pieces are connected with brackets, which are formed from a single piece of steel. This process is particularly interesting.