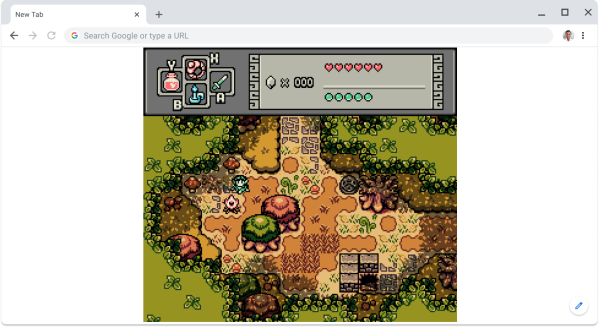 Finding a device or app that isn’t a web browser doesn’t seem easy. These days, it is either connected to the web (looking at you ESP32) or is just a web browser pretending to be something else (a la electron, PWAs, or React Native). So, of course, it is on us to create more and more exciting things to browse. [Connor Clark] is one of those people, and he brought Zelda Classic to the browser.

Zelda Classic (ZC) isn’t an official Zelda game. Instead, it’s an old engine designed to run the world in the OG Legend of Zelda and be easily modified to support hundreds of different games. To date, there are over 600 games submitted by a large community. ZC is an Allegro-based Windows-only game, so the first step was to bust out Emscripten to start tweaking the C++ code to support a web environment. Rather than completely port the huge codebase over from Allegro, [Connor] made the jump from Allegro 4 to 5. Allegro 5 has SDL as a backend and adds support for Emscripten.

Unfortunately, the 4 to 5 wasn’t as simple as changing the dependency. The API was wholly re-written, and there is a handy adapter known as Allegro Legacy to help transition a project from one to another. After squashing a multitude of bugs, it was a relatively painless procedure. After a quick detour getting music and level data working, [Connor] faced his next challenge: multi-threading. Efforts to move the main loop off of the browser thread and into a web worker ran into issues with having to yield in loops, deadlocks, and recursive mutexes. Finally, he added music and gamepad support after fixing several bugs in SDL and Allegro.

It’s an incredible journey with many tips and tricks for debugging seemingly intractable bugs. The code is up on GitHub, or jump in and start playing if you’re interested. Why not check out this browser-based OpenSCAD as well? 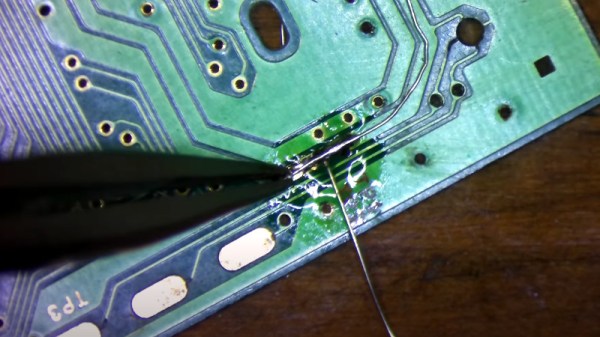 When [Taylor Burley] first opened up the cartridge for The Legend of Zelda: Oracle of Seasons, it certainly didn’t look like it had been dunked in corrosive orange juice. But looks can be deceiving, and while the game’s owner certainly did an admirable job of cleaning up the surface of the PCB, the cartridge was no longer functional. Clearly, this was a sticky situation.

After removing all of the components from the PCB, [Taylor] was quickly able to piece together what had happened. Despite the vigorous cleaning the game received after the spill, juice had found its way under each IC on the board. Left to sit in these nooks and crannies for who knows how long, the juice started to eat away at the traces on the PCB. Getting the game back up and running would naturally require considerable board repairs, but they don’t call him Solderking for nothing.

In the video below, you can see [Taylor] methodically scraping away the corrosion on the board before he starts recreating damaged connections with solid 30 gauge wire. Using tweezers and viewing the action through a digital microscope, he deftly bends the wire around to fit the shapes of the original traces and tacks the new conductors down with solder. He even goes ahead and repairs the traces that go to various test points on the cartridge; it’s a completely unnecessary extravagance, but we’re certainly not complaining. There’s a relaxing quality to watching him work, so we were in no rush to see his latest video end.

After fixing the board back up, he replaces all the components and takes it for a test drive on an original Game Boy Color. Confirming that Link’s 2001 outing is working as expected, he finishes the job with a few coats of spray-on conformal coating. With any luck, the next time this particular cartridge has to go face-to-face with some spilled juice, it will roll right off.

END_OF_DOCUMENT_TOKEN_TO_BE_REPLACED

Tell the world that something is in short supply, and you can bet that people will start reacting to that news in the ways that make the most sense to them — remember the toilet paper shortage? It’s the same with the ongoing semiconductor pinch, except that since the item in short supply is (arguably) more valuable than toilet paper, the behavior and the risks people are willing to take around it are even more extreme. Sure, we’ve seen chip hoarding, and a marked rise in counterfeit chips. But we’d imagine that this is the first time we’ve seen chip smuggling quite like this. The smuggler was caught at the Hong Kong-Macao border with 256 Core i7 and i9 processors, valued at about $123,000, strapped to his legs and chest. It reminds us more of “Midnight Express”-style heroin smuggling, although we have to say we love the fact that this guy chose a power of 2 when strapping these babies on.

Speaking of big money, let’s say you’ve pulled off a few chip heists without getting caught, and have retired from the smuggling business. What is one to do with the ill-gotten gains? Apparently, there’s a big boom in artifacts from the early days of console gaming, so you might want to start spreading some money around there. But you’d better prepare to smuggle a lot of chips: last week, an unopened Legend of Zelda cartridge for the NES sold for $870,000 at auction. Not to be outdone, two days later someone actually paid $1.56 million for a Super Mario 64 cartridge, this time apparently still in the tamperproof container that displayed it on a shelf somewhere in 1996. Nostalgia can be an expensive drug.

And it’s not just video games that are commanding high prices these days. If you’ve got a spare quarter million or so, why not bid on this real Apollo Guidance Computer and DSKY? The AGC is a non-flown machine that was installed in LTA-8, the “lunar test article” version of the Landing Module (LM) that was used for vacuum testing. If the photos in the auction listing seem familiar, it’s with good reason: this is the same AGC that was restored to operating condition by Carl Claunch, Mike Stewart, Ken Shiriff, and Marc Verdiell. Sotheby’s estimates the value at $200,000 to $300,000; in a world of billionaire megalomaniacs with dreams of space empires, we wouldn’t be surprised if a working AGC went for much, much more than that.

Meanwhile, current day space exploration is going swimmingly. Just this week NASA got the Hubble Space Telescope back online, which is great news for astronomers. And on Mars, the Ingenuity helicopter just keeps on delivering during its “operations demonstration” mission. Originally just supposed to be a technology demonstration, Ingenuity has proven to be a useful companion to the Perseverance rover, scouting out locations of interest to explore or areas of hazard to avoid. On the helicopter’s recent ninth flight, it scouted a dune field for the team, providing photographs that showed the area would be too dangerous for the rover to cross. The rover’s on-board navigation system isn’t great at seeing sand dunes, so Ingenuity’s images are a real boon to mission planners, not to mention geologists and astrobiologists, who are seeing promising areas of the ancient lakebed to explore.

And finally, most of us know all too well how audio feedback works, and all the occasions to avoid it. But what about video feedback? What happens when you point a camera that a screen displaying the image from the camera? Fractals are what happens, or at least something that looks a lot like fractals. Code Parade has been playing with what he calls “analog fractals”, which are generated just by video feedback and not by computational means. While he’d prefer to do this old school with analog video equipment, it easy enough to replicate on a computer; he even has a web page that lets you arrange a series of virtual monitors on your screen. Point a webcam at the screen, and you’re off on a fractal journey that constantly changes and shifts. Give it a try.