The Zelda series of games are known for their exciting gameplay, compelling story, but also their soundtracks. From fast-paced boss battles, to scenes of emotional turmoil, these tunes have been pumped out millions of Nintendo consoles over the years. [Tyler Barnes] has been a fan for a long time, and decided to produce a compilation of some of these tracks – delivering it on cartridge, of course.

The music was created using the Music Macro Language, and encoded into the NSF format ready to play on the Nintendo Entertainment System. [Tyler] has coded a menu system that allows the user to pick which tracks they wish to listen to. There’s some pretty parallax animations as well, along with an easter egg for those who know the games well enough to unlock it.

[Tyler] hopes to burn a few EEPROMs and send out some custom carts, either using donor carts or fresh builds. If you’re a fan of NES music but need your C64 fix as well, there’s a solution for that too. Video after the break.

END_OF_DOCUMENT_TOKEN_TO_BE_REPLACED

For many of us, being given a big old DIP ROM from nearly thirty years ago and being told to retrieve its contents would be a straightforward enough task. We’d simply do what we would have done in the 1980s, and hook up its address lines to a set of ports, pull its chip select line high, and harvest what came out of the data lines for each address.

But imagine for a minute that an old-fashioned parallel ROM is a component you aren’t familiar with, as [Brad Dettmer] did with the ROM from a SNES Zelda cartridge. We’ve seen plenty of reverse engineering stories with ancient computing gear as their subject, but perhaps it’s time to accept that some of the formerly ubiquitous devices are edging towards that sort of status.

So [Brad] takes us through the process of using the Saleae logic analyser to interrogate the chip while an Arduino stepped through its address lines, and the lesson is probably that while it seems like a sledgehammer to crack a nut it is important to factor in that unfamilarity. If you’d never worked with a 1980s ROM, it would make sense to use the tool you are familiar with, wouldn’t it?

Anyway, all’s well that ends well. While we’re on the subject of Nintendo ROMs, have a read about extracting the boot ROM from a cloned Game Boy.

It might not be enough to make you the Hero of Time, but this piece of Hylian interactive art would still be a worthy addition to your game room. [Jeremy Cook] writes in to tell us about how he put together this 8-bit style heart display, and goes into enough detail on the hardware and software sides of things that you shouldn’t have any problem adapting his design for your own purposes. 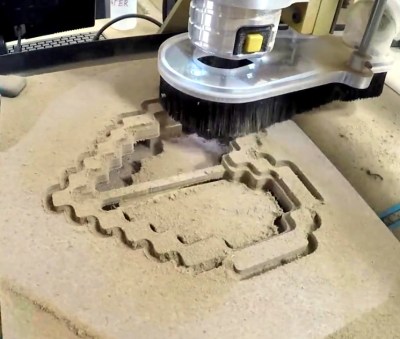 The build is pretty simple overall but it does assume you have a CNC to cut the basic shape out of MDF. You could cut the shape by hand if you had to, but if you don’t have a CNC the next best thing might be to 3D print the case. You’d potentially have to print it in two parts right down the center though, depending on how big your bed is. Whichever way you create the case, you’ll then need to cut the shape out of a piece of acrylic to make the face.

In any event, once the pieces are cut out [Jeremy] adds in a Wemos D1 Mini, a power supply, and some red LED strips. He provides a wiring diagram, but it’s fairly straightforward stuff. With a couple of 2N2222 transistors he controls the LED strips right from the digital pins of the ESP8266.

The software side is setup to be controlled via IFTTT by way of Adafruit.io. When IFTTT sees one of the keywords on Twitter, it passes a message to Adafruit.io which ultimately talks to the ESP8266 and gets the heart going. The software supports three states (on, off, and half) and gives a good example of a basic IoT implementation on the ESP8266 if you’re looking for some inspiration.

This hack seems like it would fit in perfectly with the Zelda home automation project we covered last year.

END_OF_DOCUMENT_TOKEN_TO_BE_REPLACED

Like many of us, [Laurens] likes video game music and bending hardware to his will. Armed with a Printrbot, a couple of floppy drives, and some old HDDs, he built the Unconventional Instrument Orchestra. This 2015 Hackaday Prize contender takes any MIDI file and plays it on stepper and solenoid-based hardware through a Java program.

A while back, [Laurens] won a Fubarino in our contest by using a MIDI keyboard and an Arduino to control the Minecraft environment with Legend of Zelda: Ocarina of Time songs. The Unconventional Instrument Orchestra uses that Fubarino of victory to control the steppers of two floppy drives. He only needed three pins to control the drives—one to enable, one to set the head’s direction, and one to make it step once per pulse.

If ever you’ve been around a 3D printer, you know they make music as a natural side effect. The problem is getting the printer to obey the rests in a piece of music. In order to do this, [Laurens] used his software to control the printer, essentially withholding the next command until the appropriate time in the song.

The percussive elements of this orchestra are provided by a hard drive beating its head against the wall. Since it’s basically impossible to get an HDD to do this as designed (thankfully), [Laurens] replaced the control board with a single transistor to drive the coil that moves the head.

[Laurens] has made several videos of the orchestra in concert, which are a joy all their own. Most of the visual real estate of each video is taken up with a real-time visualization of the music produced by the software. There’s still plenty of room to show the orchestra itself, song-specific gameplay, and a textual commentary crawl in 16-segment displays. Check out the playlist we’ve embedded after the break.

END_OF_DOCUMENT_TOKEN_TO_BE_REPLACED

In a clever bit of pandering to the gamer crowd for the Fubarino Contest, [Laurens] has combined The Legend of Zelda, Minecraft, and an Arduino to create something really, really cool.

[Laurens] cobbled together an Arduino, MIDI connector, and LCD display that will read a MIDI keyboard and detect when one of the songs from Ocarina of Time/Majora’s Mask is played. The Arduino then plays back the song slower and longer, just like in the game.

Here’s where things get cool: Since [Laurens] has an Arduino that knows when an OoT/MM song is played, he can have the Sun Song control the lights, or the Song of Storms turn his sprinkler system on. He chose to pipe all these commands into Minecraft, where the Song of Healing gives some health to the Minecraft character, the Song of Storms controls the rain, and other awesome mashups of Zelda and Minecraft.

This project offers more than enough to stand on its own, but [Laurens] also added a Hackaday easter egg. When playing the letters HAD in ASCII on the keyboard, our favorite URL shows up on the Arduino and inside Minecraft.

Here’s an image gallery and the source code (dropbox, so don’t spam it) for [Laurens]’ awesome project.

END_OF_DOCUMENT_TOKEN_TO_BE_REPLACED

[Mike] is a huge fan of The Legend of Zelda: The Wind Waker and now that he has a daughter it’s a great time to pass this epic quest down to the next generation. There’s a problem with explaining the plot to her daughter, though: even though the player can name the character after themselves, there’s no way to change the gendered pronouns. Yes, it’s a problem that could have been solved by a cameo by Professor Oak asking, “Are you a boy or a girl?’ but [Mike] came up with a better solution: changing all the pronouns with a ROM hack.

There are a few ‘problems’ with altering the dialogue with a ROM hack. Most importantly, all the new pronouns need to be the same length as the words they replace. [Mike] is using the word ‘milady’ to replace ‘my lad’ and ‘master,’ but also had to take a page from critiques of modern epics and replace ‘swordsman’ with ‘swordmain.’

So far, everything is working as planned and the [Mike]’s daughter [Maya] is enjoying seeing herself sail her dragon ship and battle foes. It’s a great effort to bring some semblance of gender neutrality to a classic game, and an awesome project for a really great dad.

Thanks to [Guillaume] for sending this one in.