Lucid dreaming is one of the rare psychological phenomenon terrible sci-fi frequently gets right. Yes, lucid dreaming does exist, and one of the best ways to turn a normal dream into a lucid dream is to fixate on a particular object, sound, or smell. For their Hackaday Prize entry, [Jae] is building a device to turn the electronic enthusiast community on to lucid dreaming. It’s a research platform that allows anyone to study their own dreams and access a world where you can do anything.

The core of this project is an 8-channel EEG used to measure the electrical activity in the brain during sleep. These EEG electrodes are fed into a 24-bit ADC which is sampled 250 times per second by an ARM Cortex M4F microcontroller. The captured data is recorded or sent to a PC or smartphone over a Bluetooth connection where a familiar sound can be played (think of the briefcase in Inception), or some other signal that will tell the dreamer they’re dreaming.

We’ve seen a few similar builds in the past, most famously a NeuroSky MindWave headset turned into a comfortable single-channel EEG-type device. The NeuroSky hardware is limited, though, and a setup with proper amplifiers and ADCs will be significantly more helpful in debugging the meatspace between [Jae]’s ears. 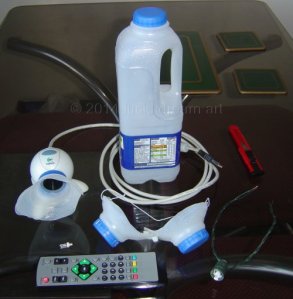 Do you lucid dream? Do you want to? [Dinesh Seemakurty] has just started something called Project Lucidity, which is the first(?) open source, developer friendly, fully featured, lucid dreaming sleep mask. And he’s looking for hackers to help!

We’ve covered lots of projects on lucid dreaming before, like making your own homemade lucid dreaming goggles, or modifying a commercial EEG headset for lucid dreaming. We also can’t forget the LucidScribe project either, the one that seeks to communicate from within dream state!

Anyway, what’s different about Project Lucidity? Well, first of all, it’s open source. Second of all, it’s based on an ATMEGA328P, meaning it’s fully compatible with the Arduino IDE. It looks like a great start, and [Dinesh] is planning on taking everything open source very soon — but before then he wants you to try it out!

If this sounds like a project you want to get behind and help develop, check out his site and sign up. Or ask away in the comments section!

[Michael] from Lucidcode is at it again, this time with an Android app called Halovision.

In case you don’t remember, this is the guy who has been working on the Lucid Scribe Project, with the end goal of communicating from inside your dreams! Here’s the basic gist of it. If we can use a sensor to detect REM (rapid eye movement) or body movement during sleep, we can tell if we’re dreaming — then it’s just a matter of using an audible cue to inform the sleeper of the dream, so they can take control and become lucid.

The first way they did this was by using commercial EEG headsets to detect REM. We covered a hack on modifying one so it would be more comfortable to wear at night, but what is really exciting is [Michael’s] new app, Halovision — No EEG required

It’s an Android app that uses the camera to detect movement during sleep, and it is only the first plugin planned for Lucid Scribe. The algorithm is still in its experimental stages, but it is at least somewhat functional at this time. They note it’ll only work for day-time naps or with a bright night light, but this could be easily solved with an IR webcam and a few IR LEDs.

It will be interesting to see where this all goes, has anyone else been following or participating in Lucid Scribe?

Over the past few years, we’ve seen [Michael]’s adventures in electronics and lucid dreaming. With commercial EEG hardware, [Michael] is able to communicate from inside his dreams with Morse code and record his rhythmic blinking for data analysis when he wakes up. His project is called Lucid Scribe, and now it’s open to just about everyone – including brain experimenters with OpenEEG hardware.

OpenEEG is a project that aims to reduce the cost of EEG hardware by providing the hardware, electrodes, software, and documentation to build your own EEG headset. It’s a great tool in the field of biofeedback, but [Michael] is going one step further; he’s busy writing an algorithm that will detect REM sleep and play an audio track while he’s in a dream state to trigger a lucid dream.

[Michael] points out that anyone with OpenEEG hardware including the DIY Olmex board can contribute to his Lucid Scribe database. You might also get some lucid dreaming time in, but then you’ll have to wake to the crushing reality of real life. [Michael], [Tom], and a few other people on the Lucid Scribe Database project have been using off-the-shelf EEG equipment to invoke lucid dreaming. Yes, that’s where you take control of your dreams and become a god. This requires wearing an EEG setup while you sleep, and these products aren’t very comfortable sleeping wear. [Tom] decided to take apart a NeuroSky MindWave and turn it into something comfortable to wear all night.

The folks at the Lucid Scribe Database log their dreams with consumer-level EEG equipment, usually something made by NeuroSky. The NeuroSky MindWave is the smallest and cheapest EEG headset available, but it’s still a hard plastic device not conducive to sleeping.

Now that [Tom] has a much more comfortable EEG setup, he can get on with improving his lucid dreaming skills and even try communicating via Morse from inside a dream.