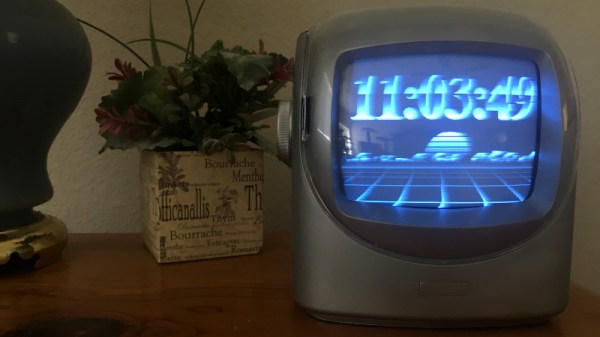 We’ve covered plenty of clocks powered by the ESP32, but this one from [Marcio Teixeira] is really something special. Rather than driving a traditional physical display, the microcontroller is instead generating a composite video signal of an animated digital clock. This could be fed into whatever device you wish, but given the 80’s synthwave style it’s pumping out, you’ll probably want to find a suitably retro CRT to do it justice.

Specifically this is a variant of the “Dali” clock, where each digit seems to melt and morph into its successor. Though his version doesn’t necessarily share code with all the previous iterations, [Marcio] does credit the developers who have pulled off similar visual tricks going all the way back to 1979. Given the vintage of this particular animation, the neon skyline and infinite scrolling grid certainly feel like a perfect fit.

Want to add a little vaporwave vibe to your own workbench? Assuming you’ve already got a 80s style CRT, all you need is an ESP32 and two wires stuck into the composite video port. One goes to ground, and the other goes to the chip’s analog pin. Once everything is powered up, you’ll be able to configure the clock with a web-based interface. It doesn’t get much easier than that.

In the documentation, [Marcio] calls out a few open source projects which were instrumental to getting his clock off the ground. The pioneering work [bitluni] did to get video out of the ESP32 is something of a given, but he also sends a hat tip to [rossumur] for his collection of 8-bit game console emulators written for the microcontroller. Projects like this are a fantastic example of what’s possible when a community works together to truly push the envelope.

END_OF_DOCUMENT_TOKEN_TO_BE_REPLACED 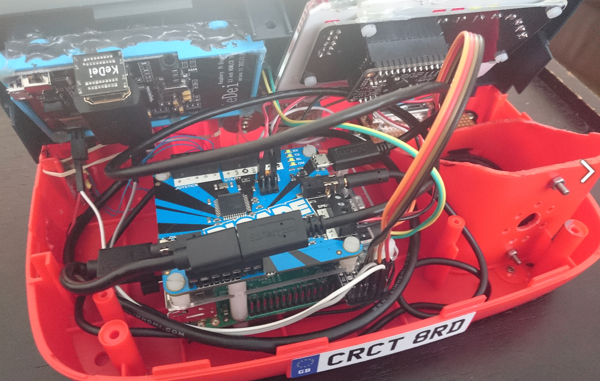 We see a lot of MAME cabinets and other gaming emulator projects here on Hackaday, but it’s not often that we see one the form factor of which so elegantly matches the ROM. [circuitbeard] converted a Tomy Turnin Turbo toy dashboard into a mini arcade machine playing Outrun.

There are many fascinating details in [circuitbeard]’s writeup. His philsophy is to “keep it looking stock” so he went to great lengths to add functionality to various elements of the toy without changing its appearance. The gear shifter was turned into a 3-way momentary switch with high and low speeds at top and bottom, with rubber bands pulling the switch back the center (neutral) when he lets go of it. The original toy’s steering wheel mounts to a slide potentiometer. The dash has a working ignition switch that uses a PowerBlock to manage the safe startup and shutdown of the Pi.  The dash also lights up the way you’d expect, and even displays accurate MPG and rev info.

For more MAME goodness here on Hackaday, see this broken tablet turned into a mini MAME cabinet or the portable MAME system of the future

END_OF_DOCUMENT_TOKEN_TO_BE_REPLACED

[Garnet Hertz], a professor and “artist in residence” at UC Irvine, built a drivable Outrun arcade cabinet for an experiment in augmented reality.

The old fiberglass and wood cabinet was hacked up and the motors, wheels, and drive train from an electric golf cart were stuffed inside. The original steering wheel and pedals were used for the controls. Although the top speed of the in-game car is about 180 mph, that was brought down to a reasonable 13 miles per hour.