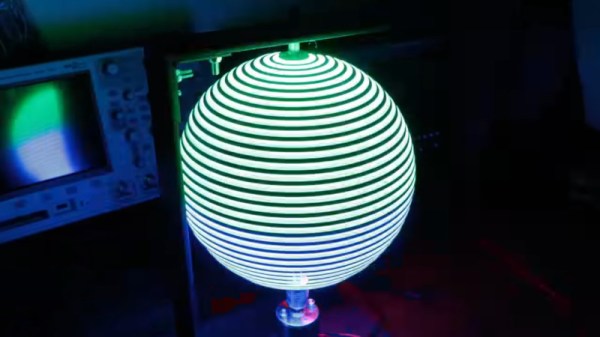 POV builds come in all shapes and sizes, and typically rely on LEDs for their high light output and fast response time. With this in mind, [Great Scott] grabbed some LED strip off the shelf and set about whipping up a POV LED globe.

Being a spinning POV build, it’s necessary to consider how to get power to the rotating elements. [Great Scott] decided to go with a simple solution of putting a LiPo battery on the rotating assembly, which runs the LEDs and Arduino Nano at the heart of the operation. The LEDs in question are of the APA102 type, making them readily addressable and capable of a wide color gamut. It’s all spun by a simple brushed DC motor, running from a separate supply at the base of the platform.

It’s very much a hacker build, held together with duct tape and zipties. Despite this, it looks tidy when in operation, as all of the important hardware is hidden at the centre of the globe. There’s a bit of a vibration problem, but [Great Scott] reckons this can be fixed with some frame modifications.

We’d love to see the build run some more advanced operations, like a representation of the Earth, or some kind of sun clock. If you’re interested in learning more about POV displays, we’ve got the primer you need. Video after the break.

END_OF_DOCUMENT_TOKEN_TO_BE_REPLACED

Death Stars were destroyed twice in the Star Wars movies and yet one still lives on in this 168 LED persistence of vision globe made by an MEng group at the University of Leeds in the UK. While Death Stars are in high demand, they mounted it on an axis tilted 23.4° (the same as the Earth) so that they can show the Earth overlaid with weather information, the ISS position, or a world clock.

More details are available on their system overview page but briefly: rotating inside and mounted on the axis is a Raspberry Pi sending either video or still images through its HDMI port to a custom made FPGA-based HDMI decoder board.  That board then controls 14 LED driver boards mounted on a well-balanced aluminum ring. All that requires 75W which is passed through a four-phase commutator. Rotation speed is 300 RPM with a frame rate of 10 FPS and as you can see in the videos below, it works quite well.

END_OF_DOCUMENT_TOKEN_TO_BE_REPLACED 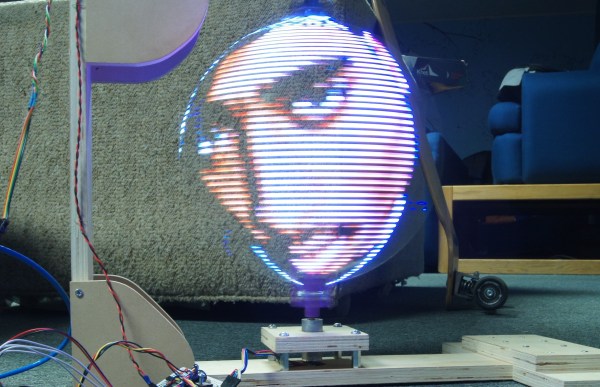 Persistence of vision projects were once all the rage, judging by a quick review of the literature here on Hackaday. They’ve tapered off a bit lately, but this impressive full-color globe display might just kick-start some new POV projects.

Built as a final project for an EE course, [Evan] and [Kyle]’s project is more about the control electronics and programming than the mechanical end of the build. Still, spinning a 12″ ring of 1/4″ thick acrylic with a strip of APA102 LEDs glued to the edge takes some thoughtful engineering. While the build appears sturdy, [Evan] does admit to a bit of wobble under full steam, which was addressed by adding some weight to the rig. We wonder if mounting half the LEDs on each side of the ring to balance the forces wouldn’t have worked better. True, it would have complicated the coding for the display, but maybe that would have been good for extra points. In any case, the display turned out well and the quality of the images is great. And as an aside: how awesome is it that we live at a time when you can order a six-circuit slip-ring for a project like this for less than $20?

It’s the end of the semester and we love seeing the final projects that have just made it across the finish line. This globe is one, yesterday we saw a voice-controlled digital eye exam, and if you have or know of a final project, don’t forget send us the link!

If POV globes are your thing, be sure to set the Hackaday WABAC machine a few years and check out this Death Star design from 2012 or this globe from 2010.