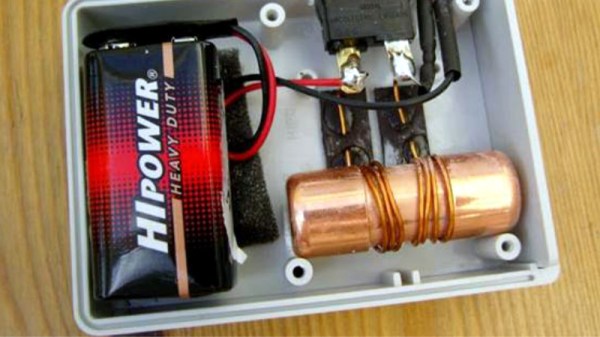 As part of an investigation into opposition to 5G mobile phone networks in the English town of Glastonbury the BBC reporter [Rory Cellan-Jones] shared details of a so-called 5G protection device that was advertised as casting a bubble of 5G-free space around its owner. This set [The Quackometer] writing, because as part of his probing into the world of snake-oil, he’s bought just such a unit and subjected it to a teardown.

What he has is a plastic project box with a graphic on top, a switch and green LED on the side, and a battery compartment on its rear. Opening the battery compartment reveals a standard 9 V alkaline cell, but the real interest comes when the cover is removed. There is a copper cylinder with a coil of wire round it, though the wires from the coil to the battery have been cut. The active part of the device is simply a battery powering an LED through a switch, as he puts it the device is a £50 ($61) poor quality torch (flashlight). Of more interest is the copper cylinder, which he identifies as a short piece of copper water pipe with two end caps. He doesn’t open it up, leaving us to expect that whatever mystical component deals with the RF must be concealed within it. This is not the usual Hackaday fare, but we know our readers are fascinated by all new technologies and will provide plenty of speculation as to how it might work in the comments.

The BBC story is worth a read to give a little background. If you are a non-Brit and you have heard of Glastonbury it is probably for the famous summer music festival held on a neighbouring farm, but the town is also famous for its connections with Arthurian legend and in recent decades for having become a centre for New Age mysticism. It has also become something of a hotbed of activism against the spread of 5G mobile networks, and has made the news this week because of concerns over the impartiality of a report condemning the technology released by its local government. If you have an interest in the 5G saga then brace yourselves for this document being used to lend a veneer of official credibility.

We’ve spent a while covering 5G issues, and given that some aspects of the story are shaping up to be a gift to technical journalists that keeps on giving, no doubt we’ll bring you more in due course. Devices such as the one featured here could even supplant audiophile products as a source of technical wonderment!

Thanks [Deus Ex Silicium] for the tip.

[Tom] managed to build a geeky, quirky digital timer for the kitchen. Where most would have used a few seven segment displays along with some buttons and called it done, he found a way to make it a lot more fun. The plush addition on top is a yellow ducky with an orange beak. When time runs out the duck will quack, call you back to the kitchen.

As you can see in the video after the break, [Tom’s] got his hands full with the family. This project was quick enough for him to fit it in during what dwindling free time he manages to hold onto. He used one of the chips that came with his MSP430 Launchpad. Since this family of processors offer extremely low-power modes when asleep they’re perfect for this type of battery-powered application. As for the duck, it’s a toy that had a couple of watch batteries and a small PCB inside. Some poking around led him to a pad that activates the quacking when grounded.