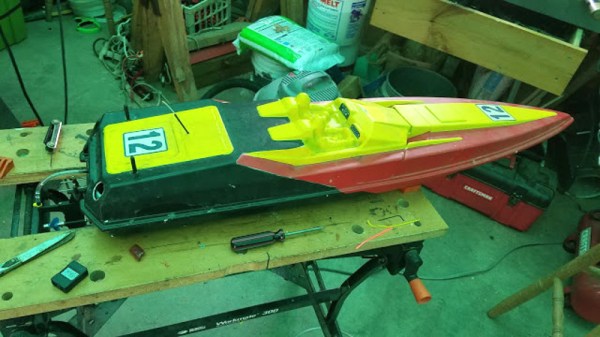 Remote control boats can be great fun, and come in all manner of forms. There are unpowered sailcraft, speedboats that scream under the power of internal combustion, and of course, those that move under electric power. The brushless motor revolution of the past 20 years in particular has proven capable of creating some exciting RC watercraft, and [Matt K] decided he wanted to get on board.

[Matt] had owned a Kyosho Jetstream 1000 for several years, but found the nitro engine to be temperamental and not the most fun for high-jinx down at the lake. An old-school brushed motor setup with mechanical speed control similarly failed to excite. However, after experiencing the power of brushless in RC planes, [Matt] knew what he had to do.

Using an online calculator, [Matt] determined that his earlier nitro powerplant was putting out roughly 900 watts. When it came to going brushless, he decided to spec a Turnigy powerplant with twice as much power, along with the requisite speed controller. There was some work to do to integrate the new motor with the original propeller driveshaft and water cooling system, but in the end [Matt] ended up with a much faster boat that is a lot less hassle to set up and run.

Perhaps though, your RC boat needs brains, over brawn? Perhaps it’s time to look at autonomy…