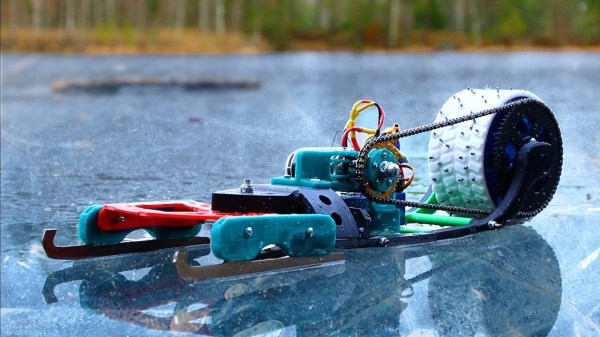 With all the futuristic technology currently at our disposal, it seems a little bizarre that most passenger vehicles are essentially the same thing that they were a century ago. Four wheels, a motor, and some seats would appear to be a difficult formula to beat. But in the 3D printing world where rapid prototyping is the name of the game, some unique vehicle designs have been pushed out especially in the RC world. One of the latest comes to us from [RCLifeOn] in the form of a single-wheeled RC snowmobile.

While not a traditional snowmobile with tracks, this one does share some similarities. It has one drive wheel in the back printed with TPR for flexibility and it also includes studs all along its entire circumference to give it better traction on ice. There are runners in the front made from old ice skates which the vehicle uses for steering, and it’s all tied together with an RC controller and some lithium batteries to handle steering and driving the electric motor.

There were some design flaws in the first iteration of this vehicle, including a very large turning radius, a gearing setup with an unnecessarily high torque, and a frame that was too flexible for the chain drive. [RCLifeOn] was also testing this on a lake which looked like it was just about to revert to a liquid state which made for some interesting video segments of him retrieving the stuck vehicle with a tree branch and string. All in all, we are hopeful for a second revision in the future when some of these issues are hammered out and this one-of-a-kind vehicle can really rip across the frozen wastes not unlike this other interesting snowmobile from a decade ago.

END_OF_DOCUMENT_TOKEN_TO_BE_REPLACED