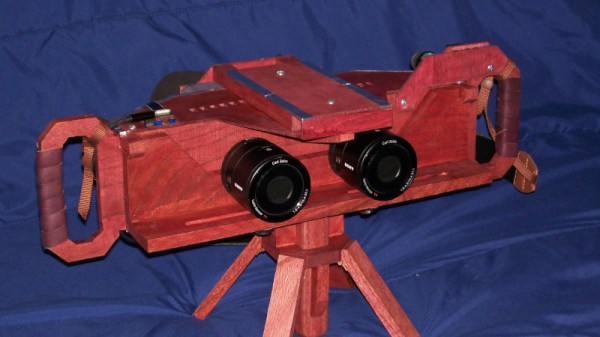 Stereophotography cameras are difficult to find, so we’re indebted to [DragonSkyRunner] for sharing their build of an exceptionally high-quality example. A stereo camera has two separate lenses and sensors a fixed distance apart, such that when the two resulting images are viewed individually with each eye there is a 3D effect. This camera takes two individual Sony cameras and mounts them on a well-designed wooden chassis, but that simple description hides a much more interesting and complex reality.

Sony once tested photography waters with the QX series — pair of unusual mirrorless camera models which took the form of just the sensor and lens.  A wireless connection to a smartphone allows for display and data transfer. This build uses two of these, with a pair of Android-running Odroid C2s standing in for the smartphones. Their HDMI video outputs are captured by a pair of HDMI capture devices hooked up to a Raspberry Pi 4, and there are a couple of Arduinos that simulate mouse inputs to the Odroids. It’s a bit of a Rube Goldberg device, but it allows the system to use Sony’s original camera software. An especially neat feature is that the camera unit and display unit can be parted for remote photography, making it an extremely versatile camera. 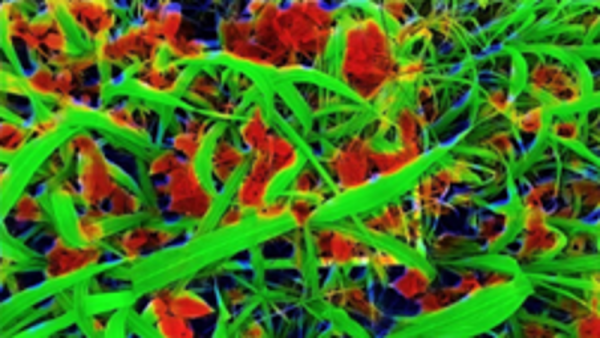 Using vision technology to identify weeds in agriculture is an area of active development, and a team of researchers recently shared their method of using a combination of machine vision plus depth information to identify and map weeds with the help of OpenCV, the open-source computer vision library. Agriculture is how people get fed, and improving weed management is one of its most important challenges. 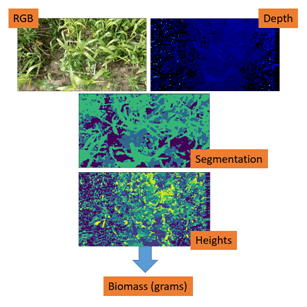 Many current efforts at weed detection and classification use fancy (and expensive) multispectral cameras, but PhenoCV-WeedCam relies primarily on an OAK-D stereo depth camera. The system is still being developed, but is somewhat further along than a proof of concept. The portable setups use a Raspberry Pi, stereo camera unit, power banks, an Android tablet for interfacing, and currently require an obedient human to move and point them.

It’s an interesting peek at the kind of hands-on work that goes into data gathering for development. Armed with loads of field data from many different environments, the system can use the data to identify grasses, broad leaf plants, and soil in every image. This alone is useful, but depth information also allows the system to estimate overall plant density as well as try to determine the growth center of any particular plant. Knowing that a weed is present is one thing, but to eliminate it with precision — for example with a laser or mini weed whacker on a robot arm — knowing where the weed is actually growing from is an important detail.

PhenoCV-WeedCam (GitHub repository) is not yet capable of real-time analysis, but the results are promising and that’s the next step. The system currently must be carried by people, but could ultimately be attached to a robotic platform made specifically to traverse fields.