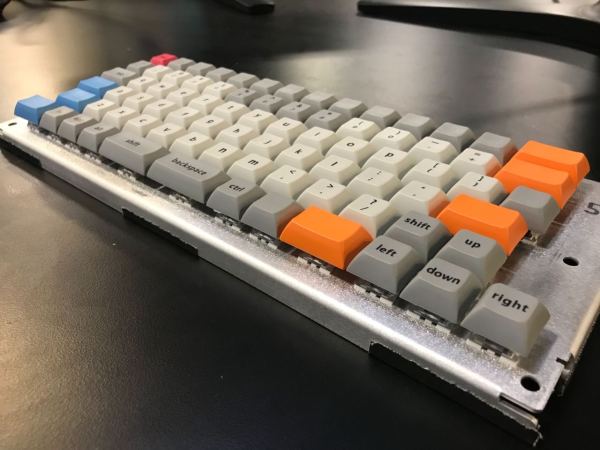 System76, a computer manufacturer known for selling machines which run Linux, recently unveiled the complete sources for their forthcoming Launch mechanical keyboard. Made with familiar tools, mass produced, and backed by a stable company it looks like the Launch will be a compelling entrant into the world of mechanical keyboards. 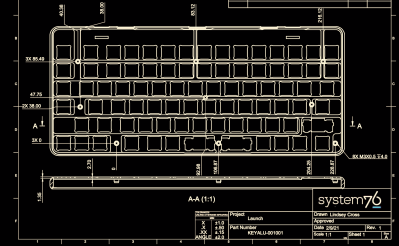 Back in March of 2020 System76 published a blog post about a new project they were embarking on; a mechanical keyboard with an unusual layout. At the time there was scant information available besides a summer 2021 target and little was heard until last week when they opened up access to the Launch repository. Everything should be recognizable if you’ve ever looked at the sources for a customized mechanical keyboard before, which is what gets our attention. Electrical sources are authored with KiCad and should be easy to tweak or fabricate. And mechanical components are provided in STEP files with mechanical drawings, presumably because they intend to actually manufacture these.

Feature wise all the usual hallmarks of a well designed keyboard are here. The Launch uses hostswap sockets to make it easy to install the usual Cherry MX compatible switch options, and includes per-key RGB backlighting courtesy of SK6805 LEDs. The ATmega32U4 runs the popular and extremely capable QMK firmware instead of something bespoke, so it should be easy to customize to the user’s desire.

System76 touts an unusual key layout, but if you’ve seen a 75% keyboard before it shouldn’t be too threatening (though we do wonder about that shrunken right shift). The most unusual feature is that it features a USB hub capable of full speed 10 gigabit USB 3.1 Gen 2 on two USB-C and two USB-A ports. It’s worth checking out the schematic to appreciate how much more complicated the hub design is than the rest of the keyboard, which is practically vestigial in comparison.

The remaining unknown is how the Launch integrates with Pop!_OS, System76’s awkwardly named remix of Ubuntu. They promise deep, compelling integration and we’re excited to see how that manifests.

If you’re looking for an Open Source computer, good luck. The RISC-V stuff isn’t there yet, and with anything else you’re going to be dealing with NDA’d Intel, AMD, or some other proprietary cruft. System76, however, makes the most big-O Open computer, and they will be announcing a new Open computer called the Thelio next month. It was on display at the Open Hardware Summit, although smartly there were no pictures taken of this box. Liliputing has reported on it, but there are a few things wrong with that speculation. No, it’s not RISC-V. We’re looking at x86 here. It’s a desktop. It has wood (walnut or maple). It doesn’t have enough cold cathode lighting to blind you, but I guess that’s a matter of taste. Everything will be announced in October.

I have a plan in the works to sell snake oil to people. Actually, it’s not snake *oil*, but it is derived from snakes. There are rattlesnake farmers out there, who breed snakes for meat (tastes like chicken!) and their skins for boots. The fascia of the skins is disposed of when this leather is being prepared, and this can be used as the base component of a glue, or something resembling gelatin. It’s basically no different than fish or animal glue, except it’s from snakes. This can be used as one of the ingredients in gummy candy. This is my plan: I’m going to sell snake oil, except it’s really snake-based gummies. They promote digestion and get rid of ions in your body, or something. Better living through snake gummies.

The paragraph you just read is a better business plan than this bit of snake oil. It’s a battery that recharges itself. It’s unclear if it recharges itself over time; if if it just recharges itself automatically, wouldn’t the battery just have more energy in it? It’s hitting all the checkmarks of snake oil too: there are references to Tesla being a ‘forgotten genius’, zero-point energy fields, and a countdown timer to their crowdfunding campaign. This rabbit hole goes deep.

Did you know Hackaday has a Retro Edition, specifically designed for old computers that somehow have web browsers? It’s true! Sometimes, we even add pics of people pulling the Retro Edition up on their ancient devices. [Steven McDonald] wondered if his Blackberry counted. Sure thing! If you can pull up the Retro Edition on your ancient computer, we’ll mention it in the Links post, too. We’re also taking suggestions on how to improve the Retro Edition; I’ll get around to improving it eventually.