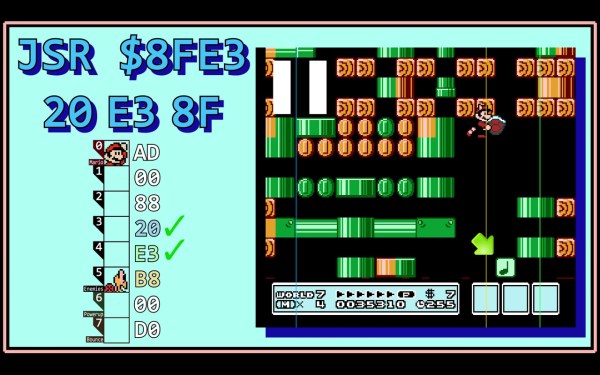 When one buys a computer, it should be expected that the owner can run any code on it that they want. Often this isn’t the case, though, as most modern devices are sold with locked bootloaders or worse. Older technology is a little bit easier to handle, however, but arbitrary code execution on something like an original Nintendo still involves quite a lot of legwork, as [Retro Game Mechanics Explained] shows with the inner workings of Super Mario Brothers 3.

While this hack doesn’t permanently modify the Nintendo itself, it does allow for arbitrary code execution within the game, which is used mostly by speedrunners to get to the end credits scene as fast as possible. To do this, values are written to memory by carefully manipulating on-screen objects. Once the correct values are entered, a glitch in the game involving a pipe is exploited to execute the manipulated memory as an instruction. The instruction planted is most often used to load the Princess’s chamber and complete the game, with the current record hovering around the three-minute mark.

If you feel like you’ve seen something like this before, you are likely thinking of the Super Mario World exploit for the SNES that allows for the same style of arbitrary code execution. The Mario 3 hack, however, is simpler to execute. It’s also worth checking out the video below, because [Retro Game Mechanics Explained] goes into great depth about which values are written to memory, how they are executed as an instruction, and all of the other inner workings of the game that allows for an exploit of this level.

END_OF_DOCUMENT_TOKEN_TO_BE_REPLACED

Snap, Inc., the company behind Snapchat, is branding itself as a hardware company. What hardware does Snap make? Spectacles, or a camera attached to a pair of sunglasses. Snap, Inc. has a market value of around $30 Billion USD.

For his Hackaday Prize entry, [William Glover] is building a device that’s easily worth $100 Billion. It’s called SnappCat, and it’s a machine learning, AI, augmented reality, buzzword-laden camera that adds memes to pictures of cats. Better get in on the Series A now because this is ????????????.

Here’s the use case for SnappCat. Place a small device containing a camera and some sort of WiFi chip. During the day, this device will take pictures. If the device recognizes your cat in a picture, it adds a meme (we assume this means text, probably using the Impact typeface), and sends it to your mobile device. Just imagine sitting in a meeting at work. Your phone buzzes, you look at the message, and you laugh uproariously. Yes, you can has fud Mr. Pibbles, you can has so much fud.

This is the height of technology. That’s not to say landing on the moon or building a civilization on Mars isn’t a superior technological achievement. SnappCat is simply the best technology humanity will every produce because it’s all downhill from here.

That said, this is a pretty interesting problem. A small, cheap device that does image recognition is hard, and adding memes is just the cherry on top. We can’t wait to see where this project goes, and it’s a great entry to the Best Product portion of the Hackaday Prize.

A few months ago, [wermy] built the mintyPi, a Raspberry Pi-based gaming console that fits inside an Altoids tin. It’s amazing — there’s a composite LCD, an audio DAC, and a chopped up Nintendo controller all connected to a Raspberry Pi for vintage gaming goodness on the road. Now, there’s a new mintyPi. The mintyPi 2.0 vastly improves over the earlier generation of this groundbreaking mint-based gaming console with a better screen, better buttons, customized 3D printed bezels, and better audio. Truly, we live in a Golden Age.

Version two of mintyPi uses 3D printed parts and includes a real hinge to keep the display propped up when the Altoids tin is open. Instead of a DAC-based audio solution, [wermy] is using a USB sound card for clearer, crisper sound. This version also uses the new, wireless version of the Raspberry Pi Zero. The Raspberry Pi Zero W allows this Altoids tin to connect to the Internet or, alternatively, gives the user the ability to dump ROMs on this thing without having to connect it to a computer.

For the software, this retro Altoids video game machine is running RetroPie, a very popular way to get retro video games running under low-power Linux machines. Everything is in there, from the NES to Amstrad to the Sega Master system.

Right now, there aren’t a whole lot of details on how [wermy] created the mintyPi 2.0, but he promises a guide soon. Until then, we’ll just have to drool over the video embedded below.

END_OF_DOCUMENT_TOKEN_TO_BE_REPLACED

[Jason] has a Sonos home sound system, with a bunch of speakers connected via WiFi. [Jason] also has a universal remote designed and manufactured in a universe where WiFi doesn’t exist. The Sonos can not be controlled via infrared. There’s an obvious problem here, but luckily tiny Linux computers with WiFi cost $10, and IR receivers cost $2. The result is an IR to WiFi bridge to control all those ‘smart’ home audio solutions.

The only thing [Jason] needed to control his Sonos from a universal remote is an IR receiver and a Raspberry Pi Zero W. The circuit is simple – just connect the power and ground of the IR receiver to the Pi, and plug the third pin of the receiver into a GPIO pin. The new, fancy official Raspberry Pi Zero enclosure is perfect for this build, allowing a little IR-transparent piece of epoxy poking out of a hole designed for the Pi camera.

For the software, [Jason] turned to Node JS, and LIRC, a piece of software that decodes IR signals. With the GPIO pin defined, [Jason] set up the driver and used the Sonos HTTP API to send commands to his audio unit. There’s a lot of futzing about with text files for this build, but the results speak for themselves: [Jason] can now use a universal remote with everything in his home stereo now.

While sick with the flu a few months ago, [CroMagnon] had a vision. A face with eyes that would follow you – no matter where you walked in the room. He brought this vision to life in the form of Gawkerbot. This is no static piece of art. Gawkerbot’s eyes slowly follow you as you walk through its field of vision. Once the robot has fixed its gaze upon you, the eyes glow blue. It makes one wonder if this is an art piece, or if the rest of the robot is about to pop through the wall and attack.

Gawkerbot’s sensing system is rather simple. A PIR sensor detects motion in the room. If any motion is detected, two ultrasonic sensors which make up the robot’s pupils start taking data. Code running on an ATmega328 determines if a person is detected on the left or right, and moves the eyes appropriately.

[CroMagnon] used an old CD-ROM drive optics sled to move Gawkerbot’s eyes. While the motor is small, the worm drive has plenty of power to move the 3D-printed eyes and linkages. Gawkerbot’s main face is a 3D-printed version of a firefighter’s smoke helmet.

The ultrasonic sensors work, but it took quite a bit of software to tame the jitters noisy data stream. [CroMagnon] is thinking of using PIR sensors on Gawkerbot 2.0. Ultrasonic transducers aren’t just for sensing. Given enough power, you can solder with them. Ultrasonics even work for wireless communications.

Check out the video after the break to see Gawkerbot in action.