In case you hadn’t noticed, it was a bad week for system admins. Pennsylvania-based United Health Services, a company that owns and operates hospitals across the US and UK, was hit by a ransomware attack early in the week. The attack, which appears to be the Ryuk ransomware, shut down systems used by hospitals and health care providers to schedule patient visits, report lab results, and do the important job of charting. It’s not clear how much the ransomers want, but given that UHS is a Fortune 500 company, it’s likely a tidy sum.

And as if an entire hospital corporation’s IT infrastructure being taken down isn’t bad enough, how about the multi-state 911 outage that occurred around the same time? Most news reports seemed to blame the outage on an Office 365 outage happening at the same time, but Krebs on Security dug a little deeper and traced the issue back to two companies that provide 911 call routing services. Each of the companies is blaming the other, so nobody is talking about the root cause of the issue. There’s no indication that it was malware or ransomware, though, and the outage was mercifully brief. But it just goes to show how vulnerable our systems have become.

Our final “really bad day at work” story comes from Japan, where a single piece of failed hardware shut down a $6-trillion stock market. The Tokyo Stock Exchange, third-largest bourse in the world, had to be completely shut down early in the trading day Thursday when a shared disk array failed. The device was supposed to automatically failover to a backup unit, but apparently the handoff process failed. This led to cascading failures and blank terminals on the desks of thousands of traders. Exchange officials made the call to shut everything down for the day and bring everything back up carefully. We imagine there are some systems people sweating it out this weekend to figure out what went wrong and how to keep it from happening again.

With our systems apparently becoming increasingly brittle, it might be a good time to take a look at what goes into space-rated operating systems. Ars Technica has a fascinating overview of the real-time OSes used for space probes, where failure is not an option and a few milliseconds error can destroy billions of dollars of hardware. The article focuses on the RTOS VxWorks and goes into detail on the mysterious rebooting error that affected the Mars Pathfinder mission in 1997. Space travel isn’t the same as running a hospital or stock exchange, of course, but there are probably lessons to be learned here.

As if 2020 hasn’t dealt enough previews of various apocalyptic scenarios, here’s what surely must be a sign that the end is nigh: AI-generated PowerPoint slides. For anyone who has ever had to sit through an endless slide deck and wondered who the hell came up with such drivel, the answer may soon be: no one. DeckRobot, a startup company, is building an AI-powered extension to Microsoft Office to automate the production of “company compliant and visually appealing” slide decks. The extension will apparently be trained using “thousands and thousands of real PowerPoint slides”. So, great — AI no longer has to have the keys to the nukes to do us in. It’ll just bore us all to death.

And finally, if you need a bit of a palate-cleanser after all that, please do check out robotic curling. Yes, the sport that everyone loves to make fun of is actually way more complicated than it seems, and getting a robot to launch the stones on the icy playing field is a really complex and interesting problem. The robot — dubbed “Curly”, of course — looks like a souped-up Roomba. After sizing up the playing field with a camera on an extendable boom, it pushes the stone while giving it a gentle spin to ease it into exactly the right spot. Sadly, the wickedly energetic work of the sweepers and their trajectory-altering brooms has not yet been automated, but it’s still pretty cool to watch. But fair warning: you might soon find yourself with a curling habit to support. 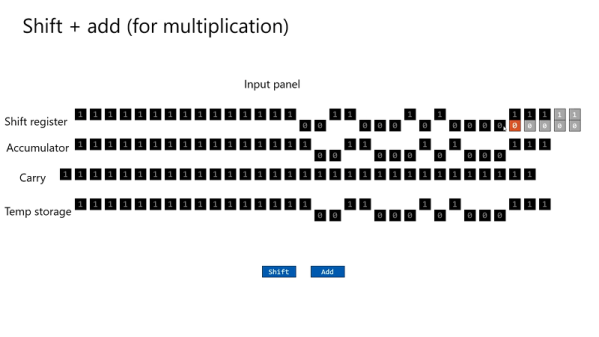 If you have worked for a large company — or even a small one — it might seem that you spend more time writing PowerPoint charts than programming. [Tom Widenhain’s] video asks the question: Can we compile C into PowerPoint? Watch the video below to find out the answer. Would it surprise you to know that [Tom] wanted to simulate the x86? It surprised us, too, and we had to note the video appeared on April 1. It does look workable, though, other than it is a bit unwieldy.

Instead of a Turing machine, this builds a set of clever logic gates. Unsurprisingly, [Tom] is the guy who put together a Turing machine in Excel. Surprisingly, he isn’t the first one to attempt a C to PPT compiler. The University of Chicago had a similar idea over a year ago, based on [Tom’s] earlier work and executed program using inefficient Turing machines.

END_OF_DOCUMENT_TOKEN_TO_BE_REPLACED

Taking apart printers to salvage their motors and rods is a common occurrence in hacker circles, but how about salvaging the electronics? A lot of printers come with WiFi modules, and these can be repurposed as USB WiFi dongles. Tools required? And old printer, 3.3 V regulator, and a USB cable. Couldn’t be simpler.

The Raspberry Pi has a connector for a webcam, and it’s a very good solution if you need a programmable IP webcam with GPIOs. How about four cameras?. This Indiegogo is for a four-port camera connector for the Raspi. Someone has a use for this, we’re sure.

The one flexible funding campaign that isn’t a scam. [Kyle] maintains most of the software defined radio stack for Arch Linux, and he’s looking for some funds to improve his work. Yes, it’s basically a ‘fund my life’ crowdfunding campaign, but you’re funding someone to work full-time on open source software.

Calibration tools for Delta 3D printers. It’s just a few tools that speed up calibration, made for MATLAB and Octave.

[Oona] is doing her usual, ‘lets look at everything radio’ thing again, and has a plan to map microwave relay links. If you’ve ever seen a dish or other highly directional antenna on top of a cell phone tower, you’ve seen this sort of thing before. [Oona] is planning on mapping them by flying a quadcopter around, extracting the video and GPS data, and figuring out where all the other microwave links are.

As far as PowerPoint being the leading cause of death for astronauts, 14 died on two shuttles, while a total of 30 astronauts died either in training or in flight.

When [Vince] saw a coworker give a presentation with an iPad, he thought to himself what a tremendous waste of computing resources he was witnessing; an iPad is just as powerful as an early Cray supercomputer, and displaying slides isn’t a computationally intensive task. We’re assuming [Vince]’s train of thought went off the rails at that point, because he came up with a neat way to give a presentation with an Apple ][.

To get his slides onto his Apple ][, [Vince] created a tool to convert the text and images for a presentation to an Applesoft BASIC program. Yes, six-color images are supported in a wonderful 280×192 resolution. The presentation was transferred onto a CompactFlash card and loaded onto the Apple with the help of a CFFA card, making it much faster to load images during the presentation than a 5.25″ disk would allow.

Of course, after the presentation some of [Vince]’s coworkers wanted to play Oregon Trail, a request easily handled by the voluminous CF card loaded with Apple ][ programs. You can check out video demo/walkthrough of his presentation after the break.