Ever wanted to build a touch table or other touch-input project, but got stuck figuring out the ‘touch’ part? [Jean Perardel] has your back with his multi-touch frame over on IO that makes any surface touch-reactive. In [Jean]’s case, that surface is ultimately a TV inside of a table.

Of course, it’s a bit of a misnomer to say the surface itself becomes touch-reactive. What’s really happening here is that [Jean] is using light triangulation to detect shadows and determine the coordinates of the shadow-casting object. Many barcode scanners and consumer-level document scanners use a contact image sensor (CIS) to detect objects in the path of IR LEDs. These are a low-power, lower-resolution alternative to the CCDs found in high-grade scanners.

As [Jean] explains in the video below, an object placed in the path of a single IR LED facing a sensor array of either type will block the light from reaching the sensors. Keep adding LEDs and their emission angles will begin to overlap, increasing the detection precision. [Jean] reverse engineered a couple of different types of scanners until he found a suitable one. He ended up with CIS that has 2700 light sensors lined up in the space of 20cm (7.87″).

[Jean] designed a 3D-printable frame to hold 96 IR LEDs in stacks of three. A Teensy turns on the LEDs, detects the touch event, calculates the position, and sends those coordinates to a Pi to be displayed on the screen. He eventually went wireless and then built a nice looking touch table to house a 32″ TV.

This is not the only way to build a multi-touch table, nor is it the simplest. Here’s one that uses finger presses to scatter light and an industrial strength projection-based table that was open-sourced a few years ago.

END_OF_DOCUMENT_TOKEN_TO_BE_REPLACED 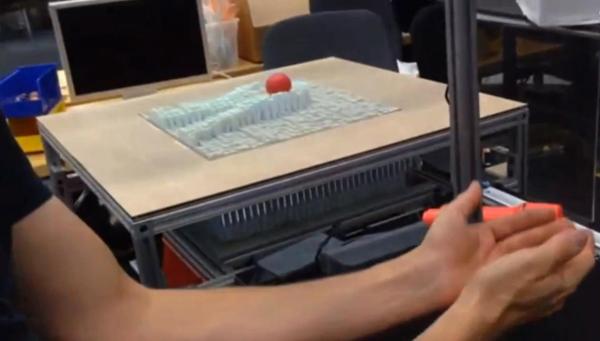 Have you ever wished your dinner table could pass the salt? Advancements at MIT may soon make this a reality — although it might spill the salt everywhere. Enter the inFORM: Dynamic Physical Affordances and Constraints through Shape and Object Actuation.

While the MIT paper doesn’t go into much detail of the hardware itself, there are a few juicy tidbits that explain how it works. There are 900 individually actuated white polystyrene pins that make up the surface, in an array of 30 x 30 pixels. An overhead projector provides visual guidance of the system. Each pin can actuate 100mm, exerting a force of up to 1.08 Newtons each. To achieve the actuation, push-pull rods are utilized to maximize the dense pin arrangement as seen, making the display independent of the size of the actuators. The actuation is achieved by motorized slide potentiometers grouped in sets of 6 using custom PCBs that are driven by ATMega2560s — this allows for an excellent method of PID feedback right off the actuators themselves. There is an excellent image of the entire system on page 8 of the paper that shows both the scale and complexity of the build. Sadly it does not look like something that could be easily built at home, but hey, we’d love for someone to prove us wrong!

Stick around after the break to see this fascinating piece of technology in action. The video has been posted by a random Russian YouTube account, and we couldn’t find the original source for it — so if you can, let us know in the comments!