There is a depressing amount of trash in our oceans, and a lot of it is washes up on beaches. [Glenn Morris] has turned collecting all this trash into a favourite pastime, using a series of custom radio-controlled Litter Buggies to haul the load.

The most basic versions of these buggies are off the shelf RC rock crawlers, usually a Traxxas TRX-4, with a basket mounted in place of the body. However, [Glenn] has developed the buggies far beyond that, making extensive use of 3D printing to create purpose-built trash haulers. He has created several frame systems to hold removable baskets, buckets, lights and tools. Most of the buggies use lithium power tool batteries to allow quick swapping, and the electric motors, ESCs and gearing is selected for low speed and high torque. Since the buggies spend a lot of time exposed to salt water, almost all the steel hardware on the chassis are replaced with stainless steel. To allow for one handed control, [Glenn] attached 3D printed levers to the steering knobs of the standard RC controllers, allowing steering to be done with his thumb.

We really like what [Glenn] has been doing with these buggies, and think they might be a good platforms for adding some autonomous capabilities. Add a smartphone for target following or obstacle avoidance, or some solar panels and a GPS autopilot system.

END_OF_DOCUMENT_TOKEN_TO_BE_REPLACED 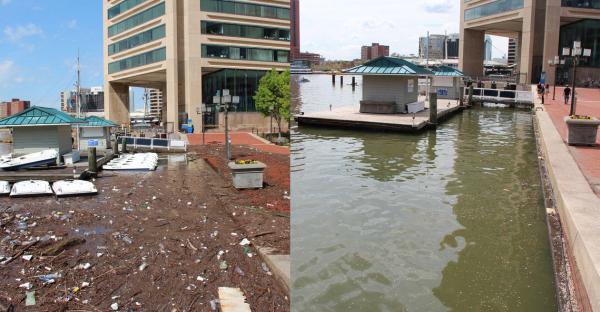 Quite frankly we’re rather surprised we haven’t heard of Mr. Trash Wheel before. It’s a community project by the Baltimore Waterfront’s Healthy Harbor program where they are trying to make the harbor both swimmable and fishable by 2020. One of the coolest projects that resonates with us is Mr. Trash Wheel — a waterwheel-powered-trash-collecting-conveyor-belt. Say that 10 times fast!

It was built in early 2014, and according to the latest data it has removed a whopping 160 tons of garbage from the waterway already. Floating buoy-nets direct the garbage floating on top of the water into a narrow passage where the conveyor belt powered by a waterwheel slowly picks up the trash, and then deposits it into a large dumpster on a barge.

In fact, it’s even saved a python from the water too!