Hackaday teamed up with the Vintage Computer Festival to have a Meetup last week. It was quite a party, with Berlin based chiptunes band Thunder.Bird and TheRyk using Commodore 64s and SID sound chip. The age of this equipment and relatively small volume original production runs makes it hard to find these days, but there is an underground group making music with these who trade among themselves. TheRyk created PlayEm64 (pictured above) to organize and play the music using the SID hardware and says that an advantage of this software is that it includes the play time (not in the fileheader), which is really useful for party entertainment! These chips sounded fantastic and added to the energy of the packed house.

A Hackaday party means that people bring their projects to show off and entertain the crowd with. [Nils Dagsson Moskopp] brought a game called Zoo Tycoon Roguelike that he built for a 7 day long competition. This is a text based roguelike game based on the 2011 Microsoft game Zoo Tycoon. As with the original game, Nils’ game aimed to keep animals happy within a thriving zoo. What’s neat about Nils’ version is that all the actions are displayed in words on the right side of the screen and he custom developed the characters in bitmap form. 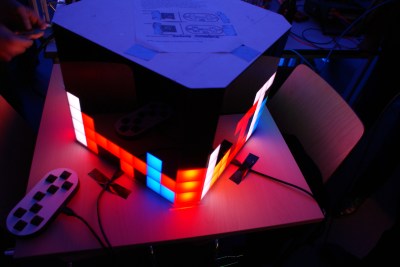 [Sisam] brought Cube Tetris, a social gaming device with 4 sides, each individually controlled so that players must collaborate with each other to win. The new take on the already addictive game kept a crowd around this table the entire night.

[Dave Darko] and [Alex] brought a collaborative project that they’ve been developing on Hackaday.io together. The first, third and 4th board shown below are [Alex’s] boards, and the second one with the acrylic case is [Dave Darko’s]. They both started with 5x5cm breakout boards for the ESP8266 but they’ve been adding features off of each other’s boards like support for the ESP-07 / ESP-12 and an additional ESP-01 footprint. Someone wished for a USB micro port, and that is now on both of their boards. The next stage for [Alex] is adding 2 pin rows for GVS (ground-voltage-signal) to his boards, a feature which [Dave Darko] has already put in place on his offerings.

We also saw an appearance by Captain Crunch (John Draper) – he’s pictured here with some friends from Lithuania. Our next event is in San Francisco in November, and we hope to see you at some point somewhere in the world.

In material science, thermal expansion is a very well understood concept. However, in most cases it’s regarded as somewhat of a nuisance. It’s the kind of thing that gives engineers headaches, and entire subsystems of machines are often designed specifically to combat it. But a group of students at MIT have come up with an ingeniously simple way of taking advantage of thermal expansion to create shape-changing composites.

Their project is a method of creating shape-shifting composites, called uniMorph. It works by using resistive heating (or simply ambient temperature) to change the temperature of a sandwich composite. The composite is made of two different materials, and the copper traces to heat them. The two materials themselves aren’t particularly important, what’s important is that they have vastly different thermal expansion rates.

When the composite is heated, one material will expand more or less than the other material. Depending on the relative shapes of the two materials, this causes the composite to bend or twist in predetermined ways. How much it bends, for example, is just a matter of how the layers are cut, and how much they’re heated.

The concept itself isn’t exactly new – bimetallic composites have existed for ages. We even covered a similar idea that works based on moisture content. But, the methods used for uniMorph are very well thought out. It’s very inexpensive to produce, and the students seem to have devised reliable techniques for designing the layers in order to produce a desired shape change.

END_OF_DOCUMENT_TOKEN_TO_BE_REPLACED 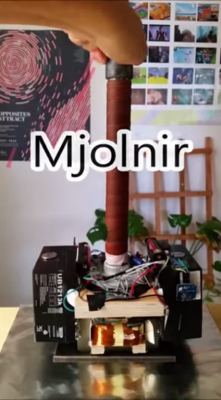 END_OF_DOCUMENT_TOKEN_TO_BE_REPLACED

Thanks to the seminal work of Howard and Hanks et al, the world is intimately familiar with the story behind perhaps the most epic hack of all time, the saving of the crippled Apollo 13 mission. But Apollo 13 is far from the only story of heroic space hacks. From the repairs to fix the blinded Hubble Space Telescope to the dodgy cooling system and other fixes on the International Space Station, both manned and unmanned spaceflight can be looked at as a series of hacks and repairs.

Long before the ISS, though, America’s first manned space station, Skylab, very nearly never came to fruition. Damaged during launch and crippled both electrically and thermally, the entire program was almost scrapped before the first crew ever arrived. This is the story of how Skylab came to be, how a team came together to fix a series of problems, and how Skylab went on to success despite having the deck stacked against her from the start.

END_OF_DOCUMENT_TOKEN_TO_BE_REPLACED

No modern technology has been met with more hype than graphene. These single-layer sheets of carbon promise everything from incredibly efficient power grids to more advanced electronics to literal elevators to space. Until now, though, researchers have yet to produce graphene sheets or ribbons in a reliable way. Researchers at the University of Wisconsin at Madison and the US Department of Energy Argonne National Laboratory have done just that, growing graphene nanoribbons on the surface of a germanium crystal.

By using a germanium crystal as a substrate, the researchers have found a directionality to the way these graphene nanoribbons form. This has been a problem for researchers experimenting with graphene microelectronics in the past; labs experimenting with making transistors out of carbon nanotubes found growth is highly unpredictable. The controlled growth of graphene nanoribbons opens the door to more precise fabrication, something that is necessary for microelectronics fabrication.

Synthesis of nanoribbons this small have not been possible before. Because germanium itself is a semiconductor – and was used for the first transistor – this discovery may pave the way for the creation of graphene-based circuits grown using the same semiconductor fabrication processes used today.

“To the Tortuga!” my husband and I heard the announcement from the backyard. Our two boys, Ben (7) and Miles (3), had become pleasantly obsessed with the coolest brothers in nature – the Kratt Brothers. From the moment that these two energetic animal-loving brothers were discovered by our kids, they’ve been huge fans. Our house has been transported to the Sonora Desert where we saved a Gila Monster, then to the Australian Outback to learn about the Thorny Devil. We even went to swing with the Spider Monkeys in South America and then back to the good ‘ole U.S. of A to harness the speed of the Roadrunner – since we are, after all, a family of runners!

Our boys have been the Grand Brothers for months and there are no signs of it letting up. At the end of summer, I decided to reward the kids with a Creaturepod, a plastic toy meant to look like the fictional walkie talkie of the same name used on PBS Kids’ Wild Kratts program. They loved it, but soon found that it didn’t do anything on its own. They both have wild imaginations and like to bring to life most of their play, but the toy just wasn’t doing it for them. Being that Chris and Martin Kratt are brothers in real life, and Ben and Miles Grand are brothers in real life, Ben thought it would only be right to have “real life” Creaturepods. Real walkie talkies that he could use to communicate with his friends and have Wild Kratts adventures. This natural interest provided an opportunity to make learning, designing, and building a source of fun for the boys. It is an amazing way to teach that you can change the world around you by having an idea, making a plan, and gathering everyone with the skills needed to complete the project.