Before you build a robot swarm you need to set parameters on what the swarm accomplishes and how it works. Erin and the Robot Missions crew came up with how a hypothetical mission might play out.

The first step involves detecting an area that needs to be cleaned, either by surveying the area by drone or through satellite imagery. Human operators set up a home base near the cleanup site, consisting primarily of a digital command post that controls the robots. The robots also deliver the trash to the home base where it is sorted and bagged.

Operators define the boundaries of the cleanup site, and the controlling software design the sweeping pattern. Robots deploy and follow a pattern, cleaning up plastic trash as well as cigarette butts and so on. Back at the base, the operator sorts through trash and solves problems by taking control of the affected robot tele-operationally and guiding it past whatever obstacle it has encountered. 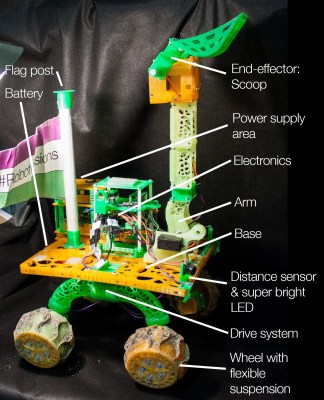 Now all they needed was a robot to do the actual work. Getting a robot that could work autonomously the way they hoped would be a big haul, so they started small.

Erin designed her robot–named Bowie–to do pretty much one thing: to scoop up trash, wirelessly controlled by a human operator. You can see a diagram on the right showing various parts of the chassis of the original robot.

Of critical importance was keeping the robot easy and inexpensive to build — or at least as much as possible. The Robot Missions crew established the following constraints: that the robotic be replicable by other teams, that it be economical in terms of build price, and that it be printable on a 10cm build platform with a maximum print time of 4 hours per piece.

Bowie consists of a horizontal platform with a scoop in front driven by three servos, and dispenses trash into a back-mounted hopper. Four knobby, AWD wheels move the robot around, while super-bright LEDs illuminate the area in front of the robot for the benefit of a teleoperator. It’s about the size of a poodle, fitting into a 15″ cube when its scoop is pulled back.

Chassis: The PVA-printed chassis has gone through multiple iterations as the project evolved. It consists of a horizontal platform raised up several inches off the ground by a set of 3D-printed wheels riding on an all-terrain suspension system. The scoop arm is controlled by a pair of servos at the base and a third to move the scoop. M3x10mm hardware secures the various parts. The most recent version of the chassis protects the electronics with a trash bin and girders to either side of the scoop. 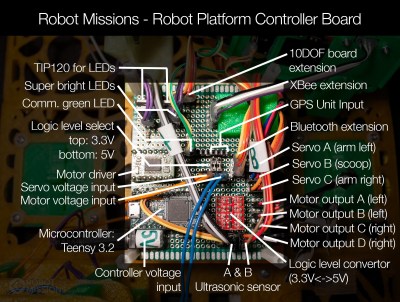 Electronics: Teensy 3.2 controls each robot with the help of an accelerometer, altimeter, a pair of ultrasonic sensors, a 10DOF board, a bluetooth module, a pair of TIP120s for triggering the ultra-bright LEDs. An XBee Series 2 radio with a duck antenna help the robot communicate with the base station.

Motors: Erin went with Pololu 75:1 gearmotors, relatively inexpensive at $20 apiece but more than enough power for the typical beach, especially with all-wheel drive. The scoop servos also cost about $20 each, keeping the overall price tag as low as possible.

Modular GPS Unit: Erin created a stand-alone GPS unit contained inside a Pelican 1010 case that simply gets plugged into the main robot, or can be removed to use with another project. It consists of an Arduino equipped with a GPS shield and altimeter and powered by a A 2500mAh LiPo. Coordinates are logged every 2-5 seconds to a SD card. 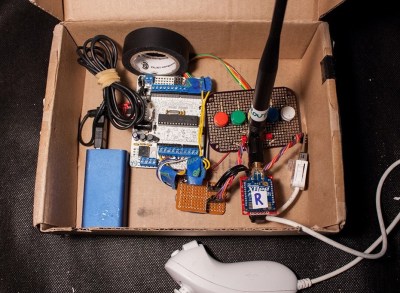 While a future Bowie would operate autonomously some of the time, there still are lots of scenarios where an operator might have to take control. For instance, how does the robot navigate around that tree stump?

Plans call for a Raspberry Pi command post server controlled over WiFi by a phone, tablet, or computer. However, right now they have what amounts to an RC setup.

The original Control Box was literally a box, of the cardboard variety, holding an XBee and antenna matching that of the robot, and controlled by an ATmega328P-based Brain Board from Erin’s RoboBrrd project — essentially an Arduino that she’d broken out all of RobotBrrd’s pins for the benefit of beginners. Recent updates put the guts into a 3D-printed case.

The Robot Missions plan also calls for experimenting with a tele-operation headband. Erin’s whimsical style is evident in the headband’s prototype. She developed it while at Fabacademy, where she created her Rapidly Deployable Automation System project, which has a lot of shades of Robot Missions in it. Erin’s headband is equipped with an accelerometer to detect the movement of her head, with servo-controlled wings offering haptic feedback, plus a row of RGB LEDs as well. 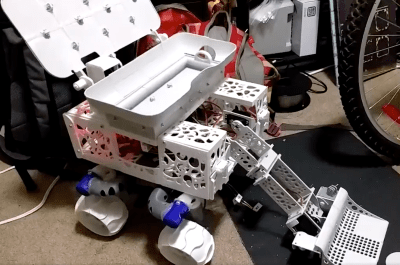 Since Bowie debuted, it’s seen dramatic improvements in nearly every area, including a new chassis that does a better job of protecting the electronics and looks great in light gray PLA.

Recently the team added a redesigned scoop that looks a lot like a commercial cat box scoop, with holes allowing sand to pour out and leaving the trash in the scoop. GoPro-compatible camera mounts were added as well, pointed at angles to see what’s going on with the scoop.

There’s also a new servo-actuated hopper tray into which Bowie can deposit whatever trash it collects. It has a lid that raises and lowers as needed, plus when the robot goes to empty its load of trash, the whole tray tilts sideways with the help of another servo.

The wheels were strengthened as well. After a wheel’s struts broke rolling on ice, the team ran the wheels through a stress simulation on Fusion 360 and confirmed that the new design offered stronger supports between the hub and the rim.

Finally, this June Robot Missions created new operator interface boards, designed by team member Randy Glenn and produced by OSH Park. The board is the backbone of a new handheld controller with a 3D-printed case, but basically contains the same guts as the old box.

Out in the Wild 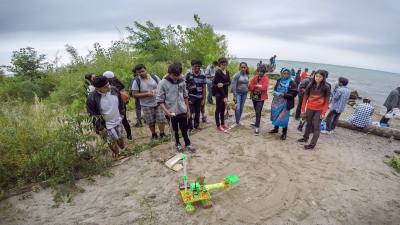 With the first draft of the robot done, Erin successfully raised CA$10K on Kickstarter to fund a series of field tests.

With the base platform created,  Erin has led a series of field tests over the course of the past year, centering around her home base of Toronto.

There were a number of events held at the city’s Cherry Beach, and volunteers and  curious passers-by had the opportunity to learn about the program and to steer Bowie around. The team also demoed the project at the 2016 Hackaday SuperCon.

Over the winter it was tested out on ice too thin to support a human’s weight. Bowie rolled out onto Collins Bay in Kingston, ON and subsequently broke a wheel, but was able to proceed on three wheels. Although the parts were redesigned, the mishap highlighted the possibility that sand-crawling wheels may not be the right ones for other terrains.

2016 was an exciting time for Robot Missions. Their field tests included 188 participants, the robot collected 2.75kg of debris, and it rolled nearly a kilometer over its various tests. What’s next? Erin seems content to work toward her goal of the mostly-autonomous swarm, with improvements in electronics, chassis, and programming coming every few months, I wouldn’t put it past her.

Erin Kennedy made her name in the maker scene as [robotgrrl], maker of cute and friendly robots that explored the intersection of toy and project. A fixture of Maker Faires, Erin went on to pursue a leadership-oriented fellowship at the MaRS Discovery District, then studied with Fabacademy where she developed her RDAS, a precursor to Bowie that consists of a folding robot that fits inside of a 10-cm cube. She also hosts a weekly Google+ hangout called the Robot Party.

If you want to learn more about Robot Missions, check out the Robot Missions project page on Hackaday.io. In addition, their Twitter feed provides frequent updates and their Facebook page features videos and photos of the project. Finally, you can also support Robot Missions through Erin’s Patreon page.

15 thoughts on “Rovers To The Rescue: Robot Missions Tackles Trash”