END_OF_DOCUMENT_TOKEN_TO_BE_REPLACED

Catch up on interesting hacks from the past week with Hackaday Editors Mike Szczys and Elliot Williams. This week we discuss the story behind falling lifetime ratings for LED bulbs, look at finite element analysis to strengthen 3D printed parts, admire the beauty of blacksmithing, and marvel at open source Lidar development. We delve into great reader suggestions for Blue Pill projects sparked by last week’s podcast, discuss some history of the V2 rocket, and cover Chromecast control hardware, glowing home chemistry, K40 laser cutter add-ons, and more.

END_OF_DOCUMENT_TOKEN_TO_BE_REPLACED 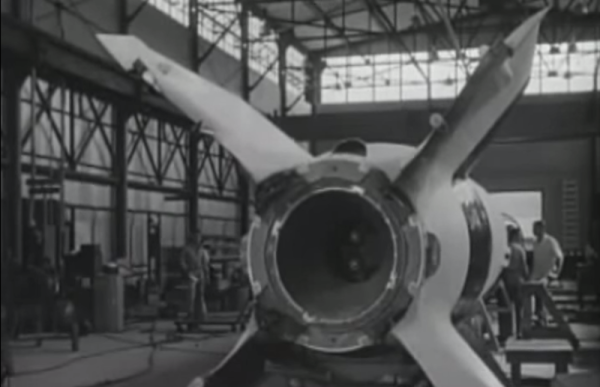 At the end of World War II, the United States engaged in Operation Paperclip to round up German V-2 rockets and their engineers. The destination for these rockets? White Sands Proving Grounds in the New Mexico desert, where they would be launched 100 miles above the Earth for the purpose of high altitude research.

This 1947 War Department Film Bulletin takes a look inside the activities at White Sands. Here, V-2 rockets are assembled from 98% German-made parts constructed before V-E day. The hull of each rocket is lined with glass wool insulation by men without masks. The alcohol and liquid oxygen tanks are connected together, and skins are fitted around them to keep fuel from leaking out. Once the hull is in place around the fuel tanks, the ends are packed with more glass wool. Now the rocket is ready for its propulsion unit.

In the course of operation, alcohol and liquid oxygen are pumped through a series of eighteen jets to the combustion chamber. The centrifugal fuel pump is powered by steam, which is generated separately by the reaction between hydrogen peroxide and sodium permanganate.

A series of antennas are affixed to the rocket’s fins. Instead of explosives, the warhead is packed with instruments to report on high altitude conditions. Prior to launch, the rocket’s tare weight is roughly five tons. It will be filled with nine tons of fuel once it is erected and unclamped.

At the launch site, a gantry crane is used to add the alcohol, the liquid oxygen, and the steam turbine fuels after the controls are wired up. The launch crew assembles in a blockhouse with a 27-foot-thick roof of reinforced concrete and runs through the protocol. Once the rocket has returned to Earth, they track down the pieces using radar, scouting planes, and jeeps to recover the instruments.

Thanks for the tip, [Thomas].