At first, Web browsers displayed HTML pages. But then people wanted those pages to do something. So we got — among other things — JavaScript. Then people wanted to do super complicated and compute-intensive things. So now we have WebAssembly. If you want to learn it, [diekmann] has a 4-part series that covers everything from getting started to porting Doom into your browser.

Paradoxically, instead of using a browser, he uses the wasm binary toolkit to run code more like a standard assembler. And wasm — what most people call WebAssembly — isn’t like most assemblers you know. Instead of labels, there are blocks that work much more like high-level language constructs such as while loops in C.

END_OF_DOCUMENT_TOKEN_TO_BE_REPLACED 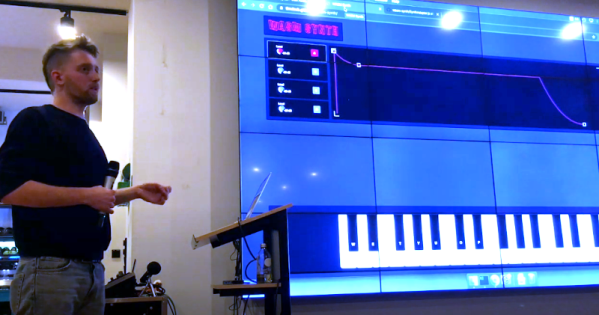 The electronics hobby has changed a lot since the advent of the microprocessor. Before that — and with the lack of large-scale integrated circuits — projects in magazines tended to be either super simple or ultra complex. However, one popular type of project dealt with music synthesis. Fairly simple circuits could combine to make a complex synthesizer so it was sort of the best of both worlds. Nowadays, you are more likely to tackle a music synthesizer in software like [Tim] did when he created Abelton in Web Assembly and C++. Along the way, he learned a lot about the relationship between math and music.

[Tim] covers what he learned about the Nyquist theorem and how to keep synthesis data flowing in real time with buffers. However, there are some problems trying to do all this in a cross-browser context. The AudioWorklet class appears to have widespread support, though, and [Tim] managed to get that working.