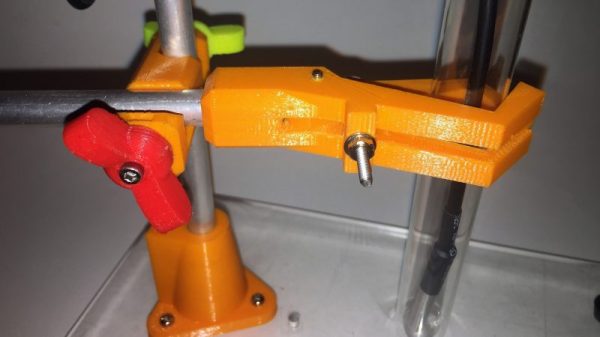 Fixturing and work holding can be huge problems for hackers. Let’s face it – that $5, alligator clip-festooned “Helping Hand” is good for only the smallest of workpieces, and the problem only gets worse as the size scales up. One can jury rig fixtures for things like microscopes and lights, but a systematic approach like this 3D-Printed work fixturing Erector Set really appeals to our need for organization.

As [Tinkers Projects] explains it, the genesis of this project came from a need to mount a microscope firmly over a PCB. Rather than build a one-off fixture, the idea of a complete system of clamps and connectors seemed to make more sense. Based on 10-mm aluminum rods and a bewildering number of 3D-printed pieces, the set has just about everything needed to fixture pretty much anything. There’s a vertical element that acts as the central support, connectors for putting another rod perpendicular to that, plus neat attachments like a three-fingered clamp for small cylindrical objects and a couple of blocks that act like a stick-vise for PCBs and similar workpieces. And yes, there’s even a fixture with alligator clips. The whole thing seems very well thought out and has a little mad scientist vibe to it, but while some fixtures look as if they came right from the chemistry lab, we’d be cautious about chemical compatibility and use near heat sources.

[Elliot Williams] did a rundown of what people are using for helping hands a couple of years ago which made us covet articulating dial indicator arms for our bench. Still, [Tinkers Projects]’ approach has a lot of appeal and is probably cheaper and more versatile to boot. 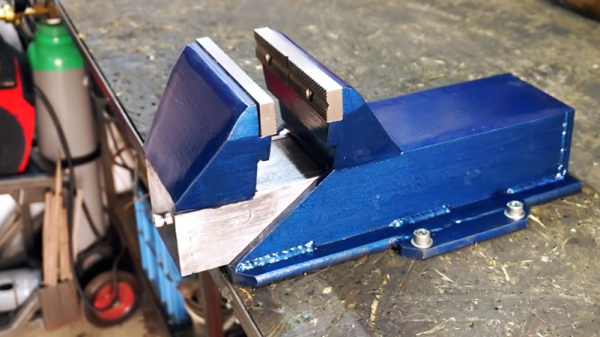 It’s a sad day when one of the simplest and generally most reliable tools in the shop – the bench vise – gives up the ghost. With just a pair of beefy castings and a heavy Acme screw, there’s very little to go wrong with a vise, but when it happens, why not take it as an opportunity to make your own? And, why not eschew the screw and go hydraulic instead?

That’s the path [Darek] plotted when his somewhat abused vise reached end-of-life with an apparently catastrophic casting failure. His replacement is completely fabricated from steel bar and channel stock, much of it cut on his nifty plasma cutter track. The vice has a fixed base and rear jaw, with a moving front jaw. Hiding inside is a 5-ton single-acting hydraulic cylinder. A single acting cylinder won’t open the vise on its own, so [Darek] came up with a clever return mechanism: a pair of gas springs from a car trunk.

With a pair of hardened steel jaws, some modifications to the power cylinder to allow foot operation, and a spiffy paint job, the vise was ready for service. Check out the build in the video below; we’re impressed with the power the vise has, and hands-free operation is an unexpected bonus.

Yes, most people buy vises, but from the small to the large, it’s nice to see them built from scratch too.