[WaveRider] is using a type of phase shift keying called BPSK to transmit digital sound and video for remote telemetry. Though a higher signal to noise ratio (SNR) is generally sought after with communications, legal limitations are imposed on total radiated power. To balance the two headed beast, he opted out on frequency shift keying due to binary shift keying’s ability to work with lower SNR. This adds the difficulty of properly reconstructing the digital signal at the receiver. A PLL based carrier regeneration circuit is used to reconstruct the signal. Using the Rabit2000 processor as the host controller on both transmitter and receiver, 96KB/Sec serial data is obtained. On the other side of the spectrum is the Homemade regenerative tube radio.

[Aaron] has been working at iweb hosting for about 5 years. When he started, the number of servers was small enough that managing them was fairly painless and could be done by just manually verifying that everything was operational. As the number of servers grew, this task became more and more difficult. They employed various methods of tracking problems, but found them all lacking in one way or another. They got an idea to build a Defcon status page based on all of the information collected about their server status. The page was built and all rejoiced. As with most projects, they just couldn’t leave it alone. Next, they built an android app to be able to see the defcon status from their phones. As cool as that was, they felt they needed to have yet another way to keep track. They What you see above is the prototype for the office defcon status display. It is extremely simple, using an Arduino (yes, we know, massive overkill) to receive status updates to change the display number. [Aaron] says that right now it is a mess, and you have to shield it from the light with your hands to see it, but it works. What should the next step be? A giant Alpha Numeric LED indicator? A nixie tube? 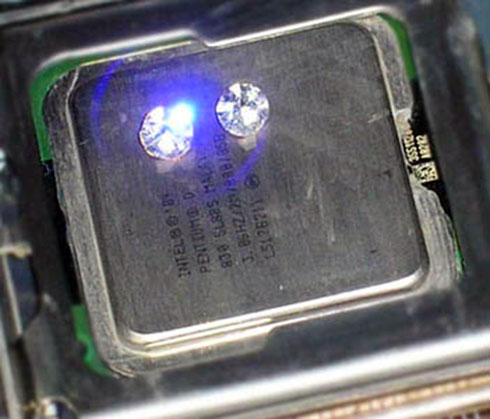 [Jared Bouck] over at InventGeek  writes about his experience making his own thermal paste. Diamonds can be up to five times as thermally conductive as silver, the primary ingredient in most popular thermal compounds.  He combines 60,000 mesh diamond dust he ordered off eBay with non-conductive silicon grease using a special mixer he constructed to keep down the dust. After some experimentation he achieved a max load temperature of 38 degrees Celsius versus a leading silver paste’s  temperature of 57c on the same system.