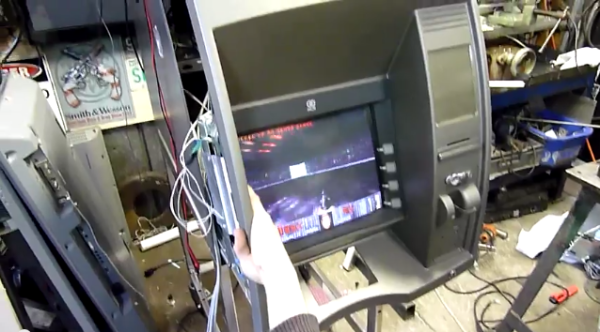 There aren’t too many details available about this hack, but we still thought it was interesting enough to share. YouTube user [Aussie50] seems to have figured out a way to install DOOM on an automated teller machine (ATM). Not only is the system running the software, it also appears that they are using the ATM’s built-in buttons to control the action in-game.

Many ATM’s today are simply computers that run a version of Windows, so one would assume it shouldn’t be too difficult to get an older game like DOOM running on the hardware. Towards the beginning of the video, you can quickly get a glimpse of what appears to be a default Windows XP background screen. You can see later in the video that [Aussie50] drops to what appears to be an MS-DOS command line. It stands to reason then that this particular model of ATM does run on Windows XP, but that [Aussie50] may have had to install MS-DOS emulation software such as DOSBOX as well.

At one point in the video, the camera man mentions they are using an I-PAC2. Some research will show you that this little PCB is designed to do USB keyboard emulation for arcade games. It looks like you can just hook up some simple momentary switches and the I-PAC2 will translate that into USB keyboard commands. It is therefore likely that [Aussie50] has hooked up the ATM’s buttons directly to this I-PAC2 board and bypassed the original button controller circuit altogether.

It is also mentioned in the video that [Aussie50] was able to get the receipt printer working. It would be interesting to somehow incorporate this into the DOOM game. Imagine receiving a receipt with your high score printed on it. This also gets us thinking about other possibilities of gaming on ATM hardware. Can you configure the game to require a deposit before being able to play? Can you configure it to dispense cash if you beat the high score? What if you modified the multiplayer deathmatch mode so all players must pay an entry fee and the winner takes all? What creative ideas can you come up with for gaming on ATM hardware? END_OF_DOCUMENT_TOKEN_TO_BE_REPLACED We get a lot of tips about LED cubes. They’re a great build to explore a lot of different things, from the circuit design, to current source and sink, and of course there’s the firmware. Why don’t we see a million of them on the front page? Well, we have seen a lot, but most of what is sent our way doesn’t exhibit such a clean build. It’s obvious that [Justin] took a lot of pride in his work on this 4x4x4 single-color cube.

Hidden away under one of the protoboards is an Arduino that drives it. A lot of the components were salvaged from the e-waste bin at his University. This includes the 12V AC wall wart he uses to power the device. A bridge rectifier converts to DC, and in addition to powering the LEDs there are a couple of USB charging ports. After the break you can see and hear it in action. The cube pulses to the music but the flip of a switch will disconnect the speaker if you want some peace and quiet to go with the light show.

If you’re looking for a challenge, this 8x8x8 RGB offering is several orders of magnitude harder to pull off… block out a lot of extra time if you do decide to take the plunge. We also heard that [Benchoff] might try to make a cube with some of those through-hole ws2812 pixels.

END_OF_DOCUMENT_TOKEN_TO_BE_REPLACED END_OF_DOCUMENT_TOKEN_TO_BE_REPLACED

[Jon Bennett] is an electrical engineer who specializes in embedded systems software. He was the first employee of Pebble Technology and the lead developer of the inPulse Smart Watch. He has studied at the University of Waterloo during which he completed several interesting internships, including working on Bluetooth and WiFi embedded software for the iPhone (Apple, 2007). Now, he has hooked up this pedestrian walk signal — picked up at an electronics surplus store — to the internet.

The web-enable project utilizes a Spark Core Wifi Module, which is an Arduino-like micro-controller with more power, to wirelessly connect to the device. With the click of a button, the hand signal can be flashed. The walking illuminated man can be triggered with another press. Messages can be sent scrolling across the LED’s flashing by in sets of two simply by hitting enter.

All the source code has been posted on Github in case anyone wants to create their own.

[Jon]’s previous work can be found in a few of our featured articles from a couple of years ago. There’s the Thrift Shop Wifi Router Robot he made that could be controlled through the internet. He also built this interactive bubble music visualizer, and this programmable RC car that can be driven by a computer.

What will he think of next?? 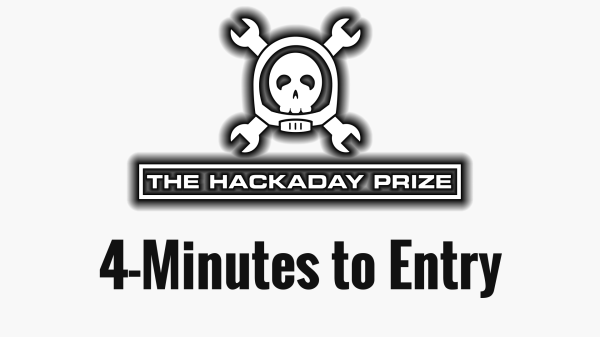 If you think it’s too much work to write about your projects you’re simply wrong, and I’m going to prove it to you.

The first of this set of videos walks though the steps for submitting an official entry… I did it in under 4 minutes.  The second clip covers the extra details you need to post to meet the requirements for the first cutoff on August 20th.

This is the bare minimum needed for your project to be reviewed by the judging panel. But here’s the thing: get your basics down early, then refine as you go along. The Hackaday Prize celebrates the journey of developing interested connected devices. From now until November you should be working on the build and adding to infor to your project post as you go.

Did we mention your odds of winning this thing are really good? 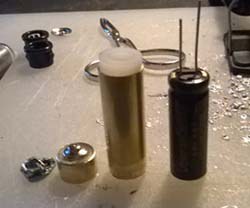 Last week, we heard of an interesting Kickstarter that puts a capacitor and charging circuit in the same space as a AA battery. This is usually a very simple endeavour, but this capacitor has the same energy density as an alkaline cell. The chemistry inside this capacitor was initially attributed to lithium ion, and a few people in the comments section were wondering how this was possible. The math just didn’t seem to add up.

Apparently, these graphene supercaps are in part designed and manufactured by [Shawn] himself. He fabricates the graphene by putting graphite powder in a ball mill for a day, adding a bit of water and surfactant, then running the ball mill for another few days. The graphene then floats to the top where it is skimmed off and applied to a nonconductive film.

There’s absolutely nothing that flies in the face of the laws of physics when it comes to graphene capacitors – we’ve seen a few researchers at UCLA figure out how to make a graphene supercap. The general consensus when it comes to graphene supercaps is something along the lines of, ‘yeah, it’ll be awesome, in 10 years or so.’ I don’t think anyone thought the first graphene capacitors would be available through Kickstarter, though. What do you do if you suck at a smartphone game? Buy some in-game upgrades to pretend like you’re good? Screw that! [Valentin] did what any self-respecting hacker would: developed an automated system to play for him.

Granted, when you see the demo video embedded below you’ll realize there isn’t much strategy involved in this game. But that setup to simulate the touchscreen presses is pretty neat. We’re used to seeing mechanical touchscreen hacks but this one is electronic, using a couple of pads of copper foil tape and some relays to make it happen. Here’s the one caveat: you still need to be touching something with your hand. This just uses the relays to switch the connection between the pads and your body.

We’ve looked around for this before. Does anyone have a cheap, simple, and effective hack to fully automate presses on a modern touchscreen? Can we use a potato or something? Tell us below, but send it in to the tips line too!