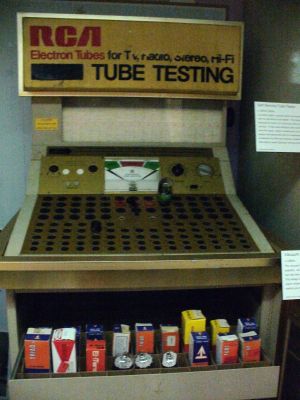 Old analog TVs, however, are a little more complicated. You can’t easily trace all the signals in a TV. When TVs used tubes, it was a good bet that one of the tubes gone bad. A dark tube was always a bad sign. Drugstores and other retail shops had tube testers (see right) and actually sold replacement tubes. You could take the back off your TV, test your tubes, buy replacements for any bad tubes, and (probably) fix your TV set.

This style of troubleshooting is often known as “Easter egging” or “the Columbus method” or, simply, “hunt until you find it.” The reason it worked is that tubes were the most likely failure.

TV Station in a Box

Of course, that didn’t always work. With solid state TVs, you probably couldn’t use that option, anyway. Pro repairmen had a lot of tricks. An oscilloscope is great if you know what the signals should look like. You could also get small boxes that created a few test patterns. However, the gold standard for TV repair was the TV Analyst made by B&K (see below). 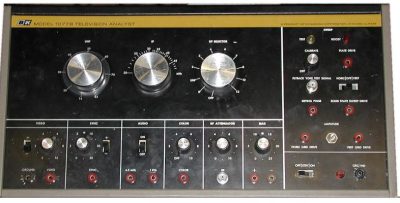 It might not look like much, but this unassuming box was a little TV station that fit on your bench. Every signal comes out to the front panel so you can inject it. The source of the signal was a CRT and a photo tube. The CRT scanned a transparency of a test image and the photo tube generated the signal. The CRT was actually a special type that emitted UV light that works well with the photo tube and had a short persistence.

Naturally, this was a black and white affair, however, the Analyst also had a color bar generator for working on color sets. These were not cheap, but if you had a lot of TVs you worked on, you could earn the cost back pretty quickly.

Using the analyst was easy. You fed the output to the TV’s input. Presumably, since the TV needed fixing, something would be wrong. The screen might be black or rolling or maybe there was no audio. You’d locate a suspect stage (the audio, or the vertical sync, for example) and use the corresponding output from the analyst to inject the signal into the set. If things started working, you’ve found the problem area. In some cases, you’d move backwards through the circuit until things quit working again to figure out the problem.

Just like radio repair, you still had to figure out what is wrong with the circuit. But narrowing it down to one area was a big help.

How the Other Half Lived

Of course, not everyone had a device like this. In fact, most people who fixed TVs didn’t have one. Realistically, if you were smart enough, you didn’t need anything more than an oscilloscope. You could often get by with even less. Even though the Columbus method wasn’t very helpful for early solid state sets, many later model TVs went modular, so you could Easter egg modules instead of tubes until the TV started working again. If you had enough spare boards, you could just try replacing modules and maybe get lucky.

Of course, analog sets are old tech today. Today’s TVs don’t have tubes, and good luck troubleshooting the circuit boards inside. It is still possible to repair them, of course, but that procedure certainly won’t require a trip to the local drug store.