Last time we looked at Spice models of a current sink. We didn’t look at some of the problems involved with a simple sink, and for many practical applications, they are perfectly adequate. However, you’ll often see more devices used to improve the characteristics of the current sink or source. In particular, a common design is a current mirror which copies a current from one device to another. Usually, the device that sets the current is in a configuration that makes it very stable while the other device handles the load current.

For example, some transistor parameters vary based on the output voltage which causes small nonlinearities in the output. But if the setting transistor has a fixed voltage across it, that won’t be a problem. The only problem with mirror schemes is that the transistors involved all have to match in key characteristics. For that reason, mirrors are usually better on ICs where the transistors are all more or less the same. You can get discrete transistors that have multiple devices built on a single substrate, but these are not very common.

Note that the operative words are “key characteristics.” Some parameters can be different. For example, on an IC with MOSFETs, it isn’t uncommon to use one transistor to set several currents. The output transistors will have different channel widths and that will scale the reference current up or down.

There are lots of places where it is handy to have a current source or sink. We’ve looked at LED drivers, of course. Battery charging and electroplating often require — or at least desire — a constant current. One of the most common uses, however, is to use them as bias elements for high-precision amplifiers.

When you bias a transistor with a resistor, you are really assuming you understand how much voltage will be across the resistor and, thus, set the current. However, in real life circuit parameters may vary both between circuits and even over time. Changes in voltages across bias resistors change currents, and that shifts the bias. 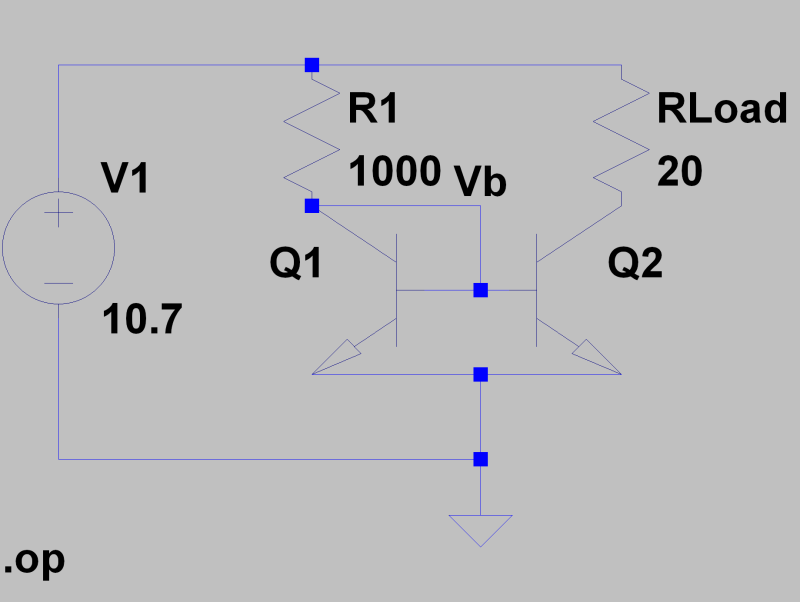 Let’s look at a transistor mirror. This mirror works best when the two transistors are matched. That is, they have the same beta and will have the same Vbe drop. The better they are matched — including how they react to things like temperature or changes in voltage — the more accurate the current mirroring will be.

Let’s start with the left-hand side. We know the base of Q1 will be at about 0.7 V or so, because the emitter is at 0 V. Since Q1’s collector is tied to the base, the voltage across R1 will be the supply voltage less 0.7 V. I cheated and made the supply voltage 10.7 V to make the math easy. That means the current through R1  — the Q1 collector current for all practical purposes — must be 10 V / R1. For that to be true, the base current has to be roughly that same current divided by the transistor beta.

There are two problems that arise with this circuit in real life. First, I’m ignoring some small currents so the numbers will be a little off. As long as the beta of the transistors is high, the error will be very small. The second problem is the beta. Transistor beta varies within a pretty wide range even for the same type of device. We usually design so that those variations don’t matter. In this case, we don’t really care what the beta is exactly, but we do care that they are the same. If they aren’t, the results will be off. You can get dual transistors in one case where the device is on one piece of silicon. For example, the SSM2212 has two transistors. Their beta values are matched to within 0.5%.

If you try the LTSpice simulation (see GitHub if you don’t want to draw it yourself) you’ll see that the numbers prove out. Here’s a sample run: 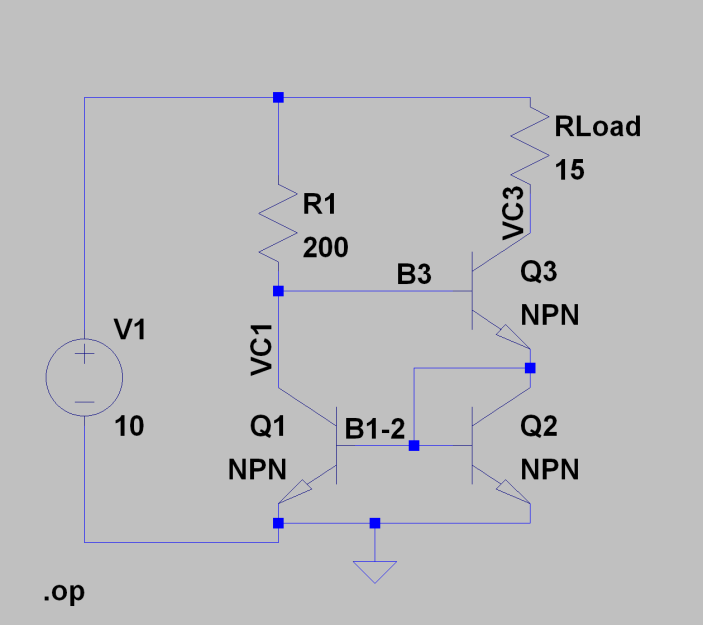 The current through Q1 and Q2 are slightly different. That is known as a static error. The static error, in this case, is actually pretty large as a percentage with the load seeing 10.8 mA from a programming current of 10.0 mA, rounding to the nearest tenth. Clearly, that’s an 8% error: 0.8 divided by 10 then multiplied by 100 to make it a percentage.

In fact, there are three things that define a better current mirror:

There are several other architectures that attempt to address these problems. One of the most common is the Wilson current mirror. It uses three transistors as you can see in the schematic.

Before we look at how it works, let’s see if it does work. Here’s the output of a simulation:

Here, the set current in Ie(Q1) is 41.3 mA. The output current through Rload is also 41.3 mA (again, rounding to the nearest tenth which is 100 microamps). If you trust the significant digits, the output is off by about 4.3 microamps. Now the error is about 0.01%. In reality, you won’t make this number for a couple of reasons. The transistors must be perfectly matched, for one thing. A variety of other factors like noise and thermal gradients could affect things, too, and that won’t show up in this simple simulation. Still, even if it is off by a factor of 100, it will be about 1% off which is a lot better than the 8% we had before.

How Does That Work?

You wouldn’t think that adding more parts would make the circuit more accurate. The trick is, though, that the transistors match. As current comes into the collector of Q1 it also enters the base of Q3. Assuming there’s enough voltage to forward bias Q3, it acts like an emitter follower. Voltage rising on the base causes a corresponding increase on the emitter (reduced by a diode drop).

That voltage feeds the bases of Q1 and Q2. The net effect is that everything rises until Q1’s collector current plus Q3’s base current exactly matches the input current. At that point — remember all the beta values should equal — the base currents are all nearly equal and you get the great matching that you see in simulation. If some parameter is perturbed, the system will correct itself as long as the transistors stay matched.

If you experiment a bit with changing R1 and the input voltage, you’ll see how all the items change to stay in sync.

So the Wilson mirror is better, right? Well, as with anything there is no free lunch. Yes, the static error goes down. But the component count goes up and additional noise and frequency-dependent effects occur. Furthermore, the Wilson mirror requires more voltage than an equivalent circuit.

There are other architectures with different tradeoffs including a Wilson circuit with four transistors instead of three. Other circuits with names like Widlar and cascode have different plusses and minuses.

Analog circuit design is somewhat like chess. You can learn how pieces move pretty easily. But mastering strategy takes a lifetime. Current mirrors are just one more trick in the transistor magic hat. The real trick is applying them and combining them with other elements to get desired behavior.