Telephone answering machines were almost a fad. They were hindered for years by not being allowed to connect to the phone lines. Then a mix of cell phones and the phone company offering voicemail made the machines all but obsolete. Unless you are really young, you probably had one at some point though. Some had digital outgoing messages and a tape to record. Some had two tapes. But did you ever have one that didn’t connect to the phone line at all? Remember, there was a time when they couldn’t. My family had one of these growing up and after doing enough research to find it in an old catalog, I decided you might like to know how it really worked.

Even if you grew up in the 1960s and 1970s, it is hard to imagine how little technology there was in an average person’s home at that time. You probably had one TV and one wired telephone. You probably had a radio or two and maybe even a record or tape player. If you were very fancy, you had a big piece of furniture that had a TV, a turntable, a radio, and a tape player in it. No cell phones, no computers, no digital assistant, and appliances were electro-mechanical and didn’t have displays. So when you saw a new piece of tech — especially if you were a kid who didn’t know what a hacker was, but still wanted to be one — it made an impression.

A Bit of Background

My Dad always had a regular job and his side business. He had a lot of different side businesses at one time or another, but he was always concerned about missing a phone call from a customer. We had two phones: the old wall mount phone with a dial and another desk phone in the “store” (the front room of the house) which also had a dial — we were way too cheap to pay for TouchTone service.

Remember, there was no call waiting and getting a second phone line was out of the question for my frugal parents. So they were always nervous about keeping the phone line clear during the day. But if you had to leave, you might miss a call. What do you do about that? 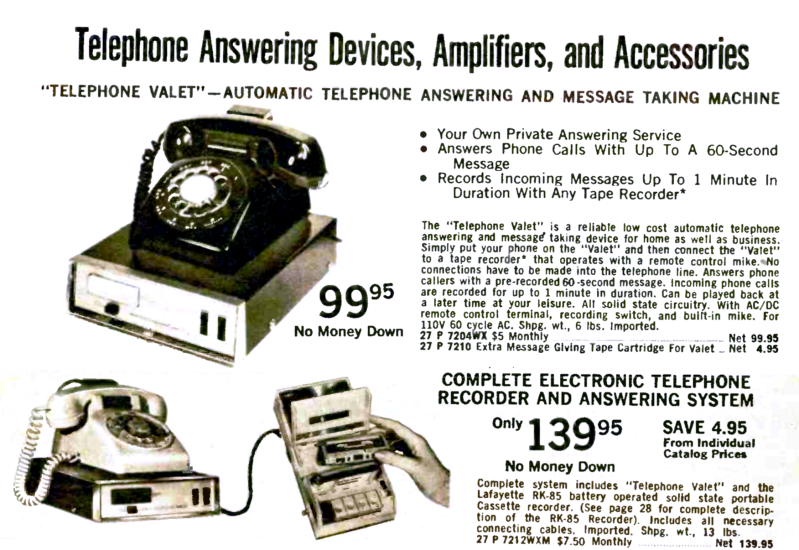 Lafayette Electronics (a Radio Shack competitor) had the answer. The “Telephone Valet” could be in your home for only $99.95. You did need to add a tape recorder, though and they’d throw that in for a grand total of $139.95 — a whole $4.95 discount! These were apparently made by Crown which was a Japanese company.

The pictures don’t really do it justice (you can see a better one at RadioMuseum.org), but I can see it just as if it were before my eyes right now. The front was silver and the top and sides were faux woodgrain. To the left was an odd tape cartridge. The two rectangles to the right were very bright incandescent lights — one red and one a kind of odd green color. What you can’t see well in the catalog picture — but you can on the Radio Museum pictures — is there was a large plastic cradle that fit between the desk phone and the handset. A thick cable connected it to the main unit.

I can’t decide if the device operation was clever or a terrible hack. Do you notice that the phone is sitting on top of the device? That isn’t an artistic choice. It had to sit up there for the device to work. Remember, you can’t connect to the phone line. So when the phone rings it shakes. And the box detects that. I would assume it has some ball bearing and microswitches like a pinball machine’s tilt sensor but I was never allowed to take it apart no matter how badly I pleaded.

The phone rings. Inside the cradle is a mechanism that holds down the phone hooks. A solenoid is energized which allows the hook to come up. The cradle has a speaker lined up with the phone’s microphone and — of course — a microphone lined up with the handset earpiece. Like an acoustic coupled modem without the foam rubber. It was up to you to get it put on correctly.

The little rectangle to the left of the main box is an endless loop tape with a magnetic sensing tape on it. You couldn’t record this tape, but a little Japanese lady — well, she sounded little — would say something like “No one is home to take your call. Please leave your name and number now,” in heavily accented English. The catalog copy says it was a 60-second message, so maybe I’ve forgotten some of it. But I do remember her voice very clearly.

On the tape recorder — which was just an ordinary tape recorder — a cable connected to the line in jack and the remote jack. When the main unit detected a ringing phone, it would pop the hook, start playing the outgoing tape, and close the contact to start the tape recorder (which — hopefully — you remembered to push play and record on before you left the house). 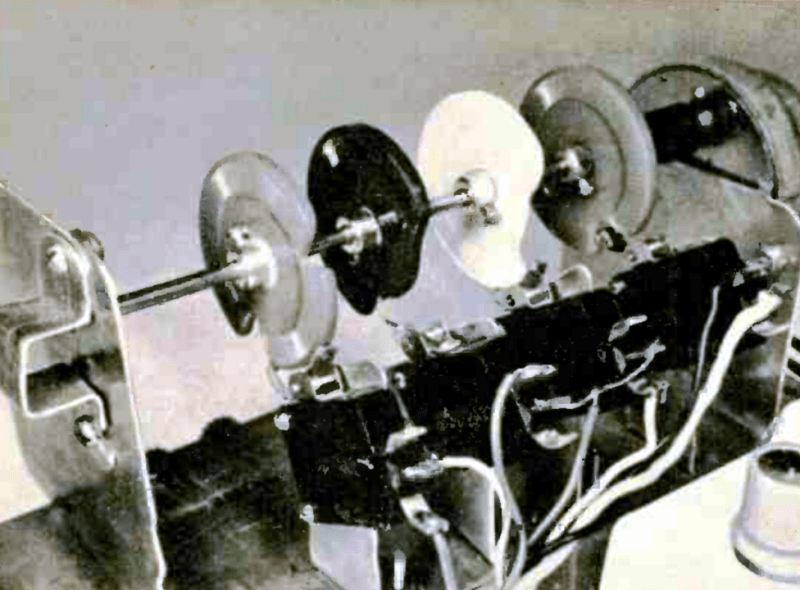 The message light would turn on and the tape player and hook solenoid would go back to idle. You could hear something whirring inside which could have been the tape motor, but I always assumed the internals were a timing motor with cams and microswitches. Remember, the catalog page is from 1968 and it probably wasn’t new that year, either. I doubt it had a bunch of logic circuits in it and it certainly didn’t have ICs in it of any kind at that price. The photo above isn’t, sadly, from the inside of the Telephone Valet, but it does show a similar homebrew device from 1967.

By today’s standards, it was terrible. A 60-second outgoing message is crazy. Listening to any message — even a hang up — was 2 minutes of listening to the outbound message followed by possibly the caller’s message. But the worst thing was that the ring detection was very sensitive. Slam the door? “Hello. No one is at home to take your call….” Pull a chair out near the phone? “Hello. No one…” Sneeze loudly or yell at someone in the other room? You get the idea.

Not being able to record the outbound message was annoying, as well. However, recording would have added to the price and in 1968, $100 was about $725 today. Even the $5 discount was worth more than $35 today. It is easy to see how the cam timer would work — we used to make our own cams from poker chips back in the day (for example, see page 41 of this old issue of Electronics Illustrated). So even though by today’s standards this was crude, it was a clever solution.

There were other devices like the one in the video below that used an induction sensor to detect the ringing phone. That sounds more reliable to me.

Even though the catalog page is from a 1968 edition, I think we didn’t get ours until maybe 1972 or 73. I would have been 9 or 10. I would have dearly loved to disassemble it but I was still fearful from having knocked over the old Zenith TV as part of an experiment. I don’t know whatever happened to that machine. Probably at the bottom of some long-forgotten landfill by now.

You can only wonder what is going to seem quaint or antiquated in another 40 years. Already a TV with a CRT in it seems like a bad memory. I’m not sure desktop computers aren’t going to become an oddity for most of the population. Or maybe our cell phones will evolve so far that your new Apple iPhone X will be laughable. Time will tell.

By the way, the Layfayette Catalog images came from the excellent American Radio History website. If you ever get ready to throw out old radio magazines or catalogs, you should check to see if they want them first.

[Thanks for the tip about old magazines Lola!]

55 thoughts on “The Bad Old Days Of Telephone Answering Machines”