Listen, it hurts to hear, but somebody needs to say it. It’s over, OK? You’ve got to admit it and move on. Sure, you could get away with it for a week or two in January, but now it’s just getting weird. No matter how hard you fight it, the facts are the facts: the holidays are over. It’s time to pack up all those lights and decorations before the neighbors really start talking.

But don’t worry, because there’s an upside. Retailers are now gearing up for their next big selling season, which means right now clearance racks the world over are likely to be playing home to holiday lights and decor. That wouldn’t have been very interesting to the average hacker or maker a few years ago, after all, there’s only so much you can do with a string of twinkle lights. But today, holiday decorations are dripping with the sort of high-tech features you’d expect from gadgets that are actively aiming to be obsolete within the next ten months or so.

Case in point, the “AppLights Personalized Projection” which I found sulking around the clearance section of the Home Depot a couple weeks back. This device advertises the ability to project multi-color custom messages and animations on your wall, and is configured over Bluetooth with a companion application on your Android or iOS device. At a minimum we can assume the device must contain a fairly powerful RGB LED, an LCD to shine the light through, and some sort of Bluetooth-compatible microcontroller. For $20 USD, I thought it was worth taking a shot on.

Around this time last year, the regular Hackaday reader may recall I did a teardown for a Christmas laser projector. Inside we found red, green, and blue lasers of considerable power, as well as all the optics and support hardware to get them running. It was a veritable laser playground for $14. Let’s see if the AppLights projector turns out to be a similar electronic cornucopia, and whether or not we’ve got a new Hackaday Holiday tradition on our hands.

After removing the screws on the bottom of the projector, the top half of the shell easily comes off to reveal the internals. As predicted, the device contains an LED, some optics, and a small LCD for the light to pass through. It does seem like there’s a lot of wasted space inside the enclosure, but overall, the internals are exactly what you’d expect considering we’re looking at what’s essentially an LCD projector built to the lowest price possible. 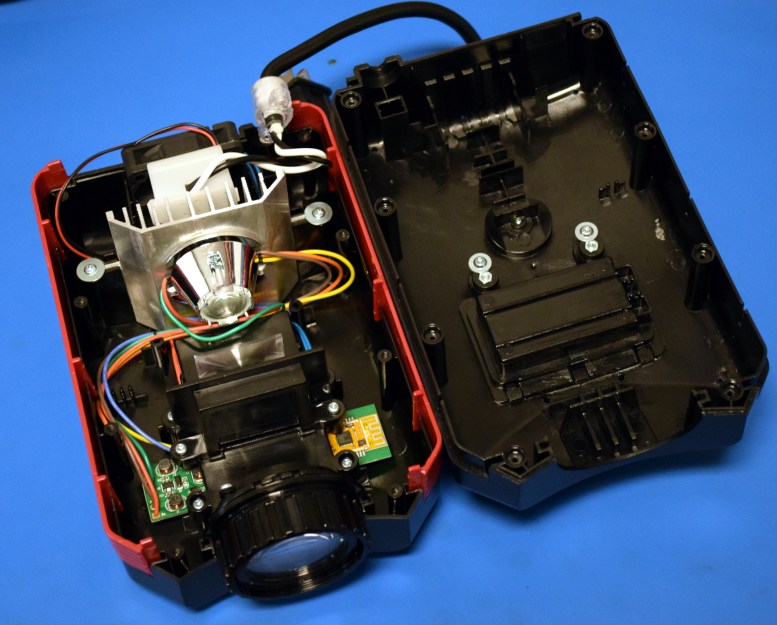 One interesting note here is that the enclosure has a sealed shut battery compartment. It would seem that at some point the designers thought of allowing the user to run the projector off of standard AA batteries, but this feature was likely deleted due to what was certainly a very short runtime. Though one does wonder what advantage a battery powered holiday projector would even hold, given the fact that it would never need to be moved to begin with.

Despite being such a simple layout, the design of the AppLights projector is not without its flaws. As you perhaps noticed in the previous image, the cooling system for the device seems to be of a notably poor design. Apparently what little air from the 60 mm fan that’s able to blow around the sides of the power supply is all that’s expected to cool the LED. To make matters worse, what appears to be a fan “grille” built into the case is in fact solid. Beyond two tiny holes, there’s no inlet for cool air to enter the device.

While you could argue that the ambient temperature this device is expected to operate in means that a robust cooling system might not be necessary, it’s hard to imagine how this arrangement is expected to do much of anything. If this device fails down the line, it seems almost a certainty it will be due to cooking itself.

While digging deeper into the projector, I was surprised to find that the small power supply tucked between the cooling fan and the LED heatsink seemed to be…not terrible. It’s a separate removable module complete with its own plastic case, appears reasonably well constructed, has a fuse on the AC side, and unlike the power supplies in other cheap gadgets we’ve dissected, it’s actually mains isolated. It even includes the aforementioned fan.

When connected to an adjustable load, we see the power supply is capable of delivering 1.35 A at 18 VDC before the voltage starts to fluctuate and the fan slows down. With the AC side already pre-wired for you, this little module could be an excellent basis for a light duty bench power supply when paired with one of the popular DPS modules we’ve covered previously.

Let There Be Light

Before I even opened the AppLights projector, the LED itself was probably the part I thought would be the most interesting and potentially reusable element of this product. Even if nothing else in the projector was worth keeping, a high-output RGB LED and associated lens would be useful for all sorts of lighting projects. I’m happy to report this component is ripe for the harvest.

The rear of the 20×20 mm module is marked “LY18423”, though that didn’t seem to return any useful information when searching. But after browsing AliExpress and comparing images, I’m fairly confident this is a 10W module. It’s wired with some very nice color coded silicone wires that have heat shrink tubing on the ends, and there was even properly applied thermal compound between it and the heatsink. At the very least, this part of the device was relatively well done.

Brains of the Operation

All of the electronics for the AppLights projector are held on a single PCB, which is logically laid out in sections that contain the three LED drivers, the LCD controller, and the Bluetooth module. Unfortunately, the LCD controller is covered under a diabolical black epoxy blob, so those components are something of a mystery. Interestingly, at the top center of the PCB we can see pads marked “- BAT +”; confirming the theory that at one time this device was meant to run on batteries.

Must have been a sale on larger ZIF connectors.

The traces can easily be matched with the datasheet.

It was refreshing to see that not only had the markings on the Bluetooth module not been obscured, but that searching for the number actually resulted in finding a datasheet through the FCC ID database. With the pinout in hand, we can see from the traces that the TTC2541 module appears to be communicating with the black blob over I2C. This fact was confirmed by connecting a logic analyzer and selecting different options in the smartphone application.

Originally I had hoped this teardown would end in the AppLights projector beaming out an image of our beloved Wrencher, but upon examination with the logic analyzer it appears that the collection of images and animations offered in the smartphone application are burned into the LCD controller, and the Bluetooth module is simply passing along the ID of what the user wants to show. Getting the projector to show anything other than what’s already in its repertoire would likely mean taking over control of the LCD manually.

That would be easy enough, but at this point I should probably mention the resolution of the projector is abysmal. The LCD panel is only 32×24, and each “pixel” is a dot approximately 0.5 mm in diameter. In practice this means the projector can only show three text characters at time. Anything longer than that, and it will scroll them across the screen. (The scroll speed can be set in software, at least.) I’m sure there are talented pixel artists out there who could make something cool with 32×24 fat dots, but I’m certainly not one of them.

These teardowns are never meant to be a review of the product, per se. That being said, I did play around with the “AppLights Personalized Projection” enough to confidently say that as a product it’s rather poor. The smartphone application (which is required, incidentally) is a mess, and the rudimentary images are dim and projected only a short distance. If you’re interested in it as an actual holiday decoration, I certainly wouldn’t recommend it.

But in terms of the hardware, it contains a very nice AC/DC power supply, a powerful LED that should be easily grafted into a different project, and even a fairly well documented TTC2541 BLE module. The LCD and its epoxy blob controller are something of a disappointment, but given the low resolution, I’m not sure what it could really be used for anyway.

All told, I would say this is another good example of the useful hardware that the industrious hacker can find in the clearance rack for pennies on the dollar. Sure you could source the individual components for less than the clearance price of the projector, but you’d still have to wait the weeks for them to ship to you. But more to the point, taking these things apart to discover new components is half the fun. Consider it a late Christmas gift.