No matter where you live in the world or what beverage you enjoy, it’s too easy to spill it on the keyboard. Obviously, the solution is to combine the two. That’s exactly what Google Japan did this past April Fool’s Day when they released the Gboard — a cylindrical keyboard wrapped around a removable cup. But is it still a joke once you’ve open-sourced it and made a build guide, more or less? 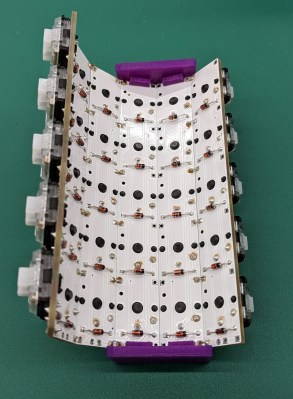 Here’s where it gets weird: each kanji on the keyboard represents a different kind of fish, and they’re laid out in Japanese phonetic order. You’re not stuck with the fish, though — one of the 60 keys switches between fish input and regular Hiragana (the basic Japanese phonetic alphabet). Underneath all those fish are low-profile Kailh chocs hooked up to an ATMega32u4. We only wish it were wireless.

We love that they open-sourced this keyboard, and it even makes sense in a way. In order to produce a good April Fool’s video, you actually have to make the fake product. The better it is (i.e. weird but plausible), the more people will like it and probably want one. So if you’re going to go to all that trouble, why not set it free on GitHub? Note that the second line of the readme is “this is not an officially-supported Google product”, which we suppose goes without saying.

Be sure to check out the short video after the break. If you don’t understand Japanese, you’ll want to turn on the closed captions.