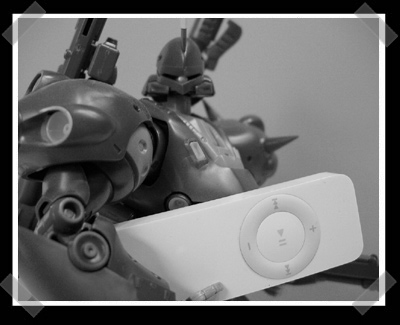 this is the best podcast ever made. of course, i’m not completely impartial, so let us know what you think. grab your ipod, download the latest hackcast (mp3), and crank it.

what you’re in for

be heard in our next podcast

when you’re done with the best 25 minutes of auditory bliss you’ve ever experienced, join in on our next podcast. call 206.888.HACK and tell us a hacking story.  if you would like to do an interview, or if you can’t call the 206 area code, contact me via aim/ichat handle jmstriegel.

END_OF_DOCUMENT_TOKEN_TO_BE_REPLACED

after having problems with my old dsl router, i finally ordered and received the actiontec gt701-wg from qwest.  i believe this is what they are starting to distribute by default in my area, and i wouldn’t be surprised if these were to be found elsewhere as well.

the interesting thing about these new actiontec routers is that they run linux.  seatllewireless has a nice page describing the system, and people have already figured out how to build and install custom firmware on the device.

most people have a single static ip, so it would be sort of neat to have your dsl router run a small static web site.  you could always port forward, but it’s one less machine to worry about.  better yet, install ssh and use it as a tunneling server.  then you can open up your wireless network for your neighbors, but not broadcast your email in the clear.

have you done anything neat with your 701 or a different embedded linux router?  do you have any great ideas for what could be done with this system?  tell us about it in the comments area.

just think about how much energy you waste when you pound your heels into the ground while walking or jogging.  you exert a lot of effort fighting gravity to lift your foot and body from the ground, only to let gravity take over, allowing your body to fall forward onto your heel again and wear another layer from the sole of your sneaker.

the kind folks at the mit media lab decided to do something about this.  by placing a piezoelectric element or a rotary magnetic generator into the heel of your shoe, you can effectively recycle some of your strut and use it for a mobile device.

END_OF_DOCUMENT_TOKEN_TO_BE_REPLACED

for today’s links, i thought it would be a kick to round up all hacks portable gaming related.  several of these you may have seen before, several of them you may not have, but they are all worth investigating and may serve as some inspiration and technical instruction for your own portable gaming project.

and, of course:
hackaday on your playstation portable
you can use our psp portal here

END_OF_DOCUMENT_TOKEN_TO_BE_REPLACED

benjamin heckendorn of portable playstation 2 fame has been working on a prototype for a mass produced portable atari 2600, code named ‘phoenix’.

it has a 3.5″ screen, takes 6 aa batteries, uses standard atari game cartridges, and will someday allow me to play hours and hours of joust and moon patrol on international flights.

ben recently started a phoenix blog to help us stay on top of the latest phoenix development news.  thanks for the tip jesse!

END_OF_DOCUMENT_TOKEN_TO_BE_REPLACED

the ‘mars rover‘ is a telepresence robot made by robo-hobbiest kerwin lumpkins.  he created it as a mock up of the real mars rover, but on a more down-to-earth scale.

controlling the tank is a general purpose robotics development board, also designed by kerwin.  the darc board takes input from infrared and sonar sensors, controls locomotion and camera aim, and has basic ability to make decisions based on a combination of its immediate environment and operator commands which are sent to the robot over a rf modem connection.

here’s what makes this cool.  if the robot detects that a given command would place in in jeopardy (such as running into a kitchen cabinet) it will abort and send back a warning to the control station.

to better simulate a real mars rover system, kerwin uses some tivo-like time shift software to delay the incoming video signal 5 seconds.  this makes controling the rover more difficult and is why onboard decision making is a must for your own martian explorer project.

END_OF_DOCUMENT_TOKEN_TO_BE_REPLACED

wow, such heated debate!  the fox blocker is what’s called a band-stop filter.  you can make your own and block whichever cable frequency you wish.

sidenote: in the old days, cable companies would screw a few of these on your line to block premium channels that you hadn’t paid for.  good samaritans would occasionally crack open the cable box and remove all the filters for everyone on their block.

i thought the band-stop filter post was a nice juxtaposition to yesterday’s amp, but that’s just me.  if you are more interested in making things louder, the chu moy amp circuit used in two of our previous posts might be a good place to start for your dreamcast amp guts:
portable minty amp
covert desk lamp mic

jim younkin, shufflephones inventor, has started a new site devoted to shuffle hacking.  read my article on safely disassembling a shuffle and get to work.  we could all use a good shuffle hack now and then.

last, but not least: a giant, eight foot nes controller