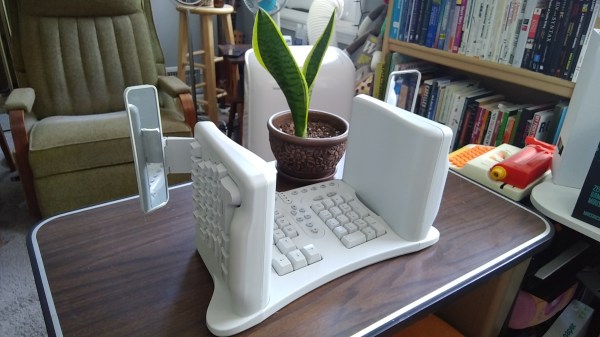 Yep, this keyboard is another ebay special. I can’t stay away! This is a SafeType™ V801 from probably the early 2000s, although there is no date on it anywhere. I’m basing my guess on the fact that there are so many media buttons. I’ve been eyeing these weirdo mirrored keebs for a while, and when I saw how cheaply this one was going for, I had to have it. That’s just how it goes. I was really excited to clack on it and I’m only marginally disappointed by it. But I can tell you that if my Kinesis were to suddenly die, I would probably reach for this keyboard until the new one showed up.

So, why does it look like this? There are varying levels of ergonomics when it comes to keyboards. This one fights strongly against wrist pronation and forces you into a position that helps the shoulders and neck as well. You’d think it would be weird to hold your arms aloft at right angles, but it’s actually not that strange in practice because you’re pressing inward to type, kind of like playing an accordion or something.

The weird part is looking in the rear-view mirrors to accurately hit the numerals and F keys, though I’ll be honest: in my test drives, I found myself using the mirrors mostly to make sure my hands were on the home row. And that’s with three homing protrusions apiece on F and J! More about that later.

So yes, some of the keycap legends are backwards so you can read them in the mirror. If you don’t like using the numeral row, there’s a num pad in the center, along with the Home/End cluster, a quartet of comically large arrow keys, and a boatload of dedicated media and program launch buttons. All the buttons in the middle are fairly awkward to reach because you must either pull your hand down and around the bottom, or else go over the top. END_OF_DOCUMENT_TOKEN_TO_BE_REPLACED

END_OF_DOCUMENT_TOKEN_TO_BE_REPLACED

Now here’s a stocking stuffer of a keyboard. The DecaTxt is the size of a deck of cards, and at first glance it looks like some kind of pocket Keno machine or other gambling or gaming apparatus. But that’s just because it’s so colorful. When you only have ten keys emulating a full keyboard, there’s bound to be some serious labeling going on, as there should be.

The DecaTxt is a Bluetooth 4.0 chording keyboard that’s meant to be used with your phone or whatever you want to pair it with. It was originally called the In10did, which stands for Input Nomenclature Ten Digit Interface Device. Catchy, no? At some point in the last ten years, this little guy went wireless and got a cooler name — the DecaTxt. END_OF_DOCUMENT_TOKEN_TO_BE_REPLACED

I can’t remember how exactly I came across the OrbiTouch keyboard, but it’s been on my list to clack about for a long time. Launched in 2003, the OrbiTouch is a keyboard and mouse in one. It’s designed for people who can’t keyboard regularly, or simply want a different kind of experience.

The OrbiTouch was conceived of by a PhD student who started to experience carpal tunnel while writing papers. He spent fifteen years developing the OrbiTouch and found that it could assist many people who have various upper body deficiencies. So, how does it work?

To use this keyboard, you put both hands on the sliders and move them around. They are identical eight-way joysticks or D-pads, essentially. The grips sort of resemble a mouse and have what looks like a special resting place for your pinky.

One slider points to groups of letters, numbers, and special characters, and the other chooses a color from a special OrbiTouch rainbow. Pink includes things like parentheses and their cousins along with tilde, colon and semi-colon. Black is for the modifiers like Tab, Alt, Ctrl, Shift, and Backspace. These special characters and modifiers aren’t shown on the hieroglyphs slider, you just have to keep the guide handy until you memorize the placement of everything around the circle.

The alphabet is divided up into groups of five letters which are color-coded in rainbow order that starts with orange, because red is reserved for the F keys. So for instance, A is orange, B is yellow, C is green, D is blue, E is purple, then it starts back over with F at orange. If you wanted to type cab, for instance, you would start by moving the hieroglyph slider to the first alphabet group and the color slider to green.

END_OF_DOCUMENT_TOKEN_TO_BE_REPLACED

You know me, I like to get my feet involved when I use my computer, which happens pretty much all day every day at this point. My cache of pedal inputs keeps growing like mushrooms in the darkness under my desk: every upper case letter in this post and dozens more have been capitalized with a shift pedal!

Naturally, I’ve thought about what it might be like to mouse with my toes. The more time I can spend with both hands on the keyboard, the better. I started sniffing around for foot-sized trackball candidates, thinking maybe I could just build one with regular mouse guts. Then I found a 15-year-old Golden Tee home edition console at a thrift store. It has a large ball and four buttons, so it seemed ripe for turning into a mouse as-is, or just stealing the ball to build my own. So far, that hasn’t happened, though I did solder a bunch of wires for testing out the controls. END_OF_DOCUMENT_TOKEN_TO_BE_REPLACED

END_OF_DOCUMENT_TOKEN_TO_BE_REPLACED

X-Bows was founded by a doctor who saw a lot of RSI issues in programmers and writers and decided to take matters into his own hands. The keyboard was born on Kickstarter in 2017 and now comes in three models. They sent me the mid-range model called The Knight, which retails for $249, but seems to be on permanent sale for $199. The top-of-the-line Knight Plus has a magnetic, detachable 10-key that can attach to either side. END_OF_DOCUMENT_TOKEN_TO_BE_REPLACED