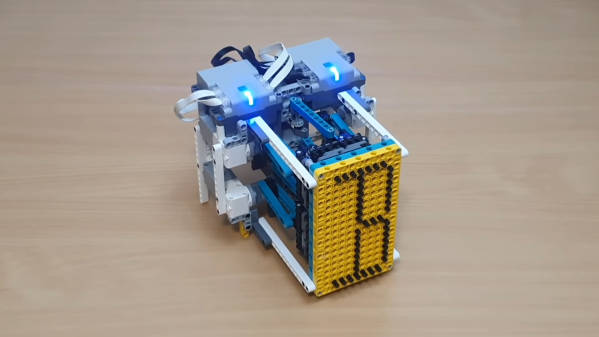 Hackers love 7-segment displays, and will gladly wax lyrical about the silly words you can almost spell on them and so on. Less appreciated are their bigger cousins, the fourteen and sixteen segment displays, which get all alphanumeric about things and are thus much easier for humans to read. You can even build the former out of Lego, as [ord] demonstrates.

The “segments” are made up of Lego shafts that are pushed up through a yellow matrix of holes when they are switched “on.” A full seven motors are used to make the single-character display work, each one driving two segments. Two Lego Powered Up controller bricks are required to drive everything going on here, making the final design not just mechanically complicated, but electronically complicated as well.

Amusingly, those don’t come cheap, either; the parts total cost of this build is likely somewhere between $50-100 US. You probably don’t want to build an entire scrolling message board using this design, even if it does look resplendent in black and taxi yellow.

We’ve seen [ord]’s work before, too, in the form of these mechanically magnificent 7-segment Lego displays. Video after the break.

END_OF_DOCUMENT_TOKEN_TO_BE_REPLACED

[Terry] wanted to come up with a little electronics project for his kids, and also came up with something to keep the wife happy. It’s an adorable 14-segment love letter, pieced together with some leftover LED displays and a bit of solder.

There isn’t a microcontroller anywhere to be seen in this project – all the illuminated segments are tied to a switch, and aside from a few resistors there isn’t much to this circuit. The simplicity means it’s a great way for [Terry] to get his kids involved in electronics.

If you’re wondering why [Terry] didn’t throw multiple Arduinos, shift registers, or LED drivers into the build, consider this: sometimes segment displays can be static. The time circuit prop from Back to the Future (but not this modern recreation) was wired up in a similar manner, as only a few specific dates needed to be displayed. Either way, we’re thinking good on [Terry] for introducing his kids to a soldering iron and doing something special for his lady friend.

What do you do if you see a bunch of 14-segment LED displays for sale for a penny a piece? [Fritzler], when faced with that conundrum did what any of us would do – he bought 64 14-segment displays and built a huge 16×4 alphanumeric display (German, here’s the translation).

[Fritzler] found a cache of old East German 14-segment displays for €0.01 at electrobi.de (don’t bother, they’re out of stock), and the only thing he could think of was building a gigantic display. He used ULN2803 Darlington drivers for each LED module, but there was still the issue of controlling the entire display.

For that, [Fritzler] decided to make his 16×4 use the same protocol as the Hitachi HD44780 LCD controller. This meant [Fritzler] could wire up his gigantic, power-hungry display to a microcontroller as if it were a simple LCD display.

An amazing amount of work went in to the creation of this display, as evidenced by a pair of pictures showing what [Fritzler] had to solder.

Thanks [freax] for sending this one in.