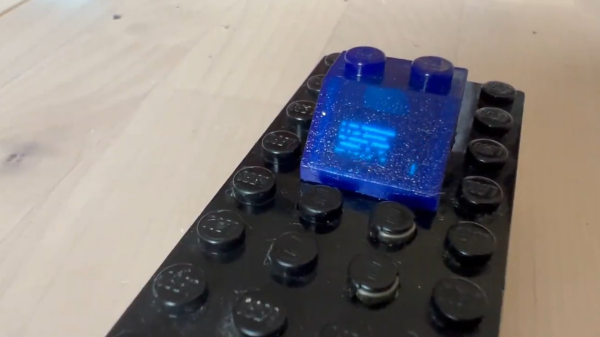 In childhood, many of us wondered — wouldn’t it be cool if our miniature toys had “real” functions? Say, that our toy cars actually were able to drive, or at least, that the headlights could light up. [James Brown] captures some of this childhood expectation of magic, recreating the 2×2 45°-sloped Lego bricks with computer screens and panels drawn on them by building a LEGO brick (thread, nitter) with an actual display inside of it.

This is possible thanks to an exceptionally small OLED display and a microcontroller board that’s not much larger. It’s designed to plug onto a LEGO platform that has an internal 9V battery, with power exposed on the brick’s studs. [James] has taken care building this — the brick was built with help of a tiny 3D-printed form, and then, further given shape by casting in what appears to be silicone or resin.

We’ve yet to hear more details like the microcontroller used — at least, the displays look similar to the ones used in a different project of [James]’, a keyboard where every keycap has a display in it (thread, nitter). Nevertheless, it is lovely to witness this feat of micro-engineering and fabrication. It reminds us of an another impressive build we covered recently — a 1/87 scale miniature Smart Car that’s as functional as you can get!

END_OF_DOCUMENT_TOKEN_TO_BE_REPLACED 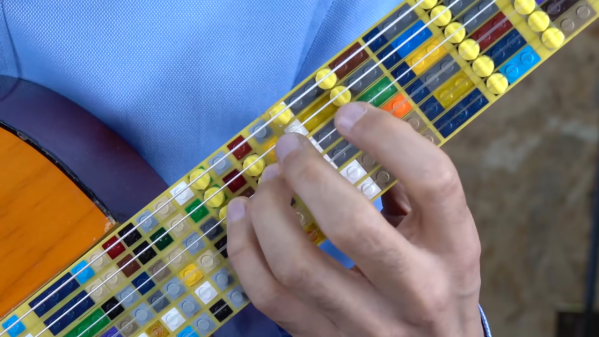 Is there anything LEGO can’t do, aside from turning to a soft gelatin when a human steps on one? The incredible range of piece sizes that make them such versatile building blocks extends their utility far beyond the playroom floor, as [Tolgahan Çoĝulu] demonstrates with his LEGO microtonal guitar.

His LEGO what now? If you’re in the western world, microtones simply refer to those that fall between the 12 semitones-per-octave shackles of the western scale. Microtones are smaller than semitones, so they can bring a richer flavor to music, as evidenced in eastern cultures. In the past, [Tolgahan] has made microtonal guitars with 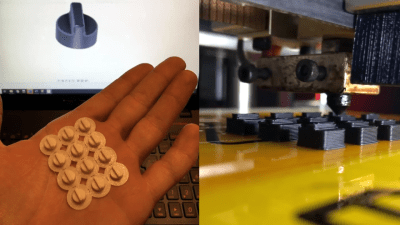 fixed and adjustable frets using standard fret wire. After his young son copied his design in LEGO, he decided to bring it to life.

[Tolgahan] and a friend designed and printed a compatible base plate fingerboard and glued it in place on an old classical guitar. Then he and his son spent hours digging through their hoard to look for 1x1s and other 1x pieces to build up the fingerboard.

Here’s where it gets really interesting — they printed a ton of special 1×1 pieces to build up the moveable frets. Since they’re 1x1s, they can also be used to teach music simply by moving them around to the notes of the scale or song being taught, no matter the hemisphere it comes from. Pluck your way past the break to watch the story play out and hear this LEGO guitar for yourself.

If [Tolgahan] and his son had used machine learning to sort their LEGO, it probably wouldn’t have taken so long to find all those 1x1s.