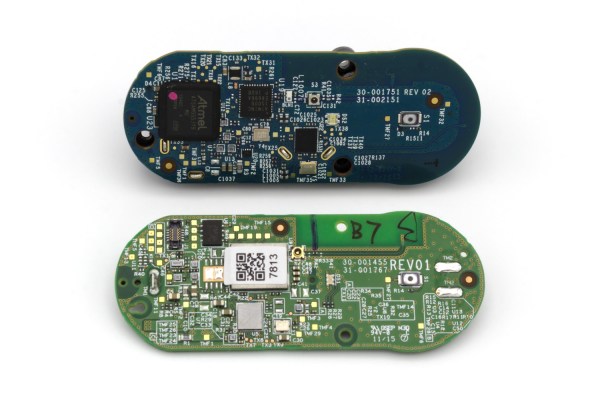 The Internet of Things will revolutionize everything! Manufacturing? Dog walking? Coffee bean refilling? Car driving? Food eating? Put a sensor in it! The marketing makes it pretty clear that there’s no part of our lives which isn’t enhanced with The Internet of Things. Why? Because with a simple sensor and a symphony of corporate hand waving about machine learning an iPhone-style revolution is just around the corner! Enter: Amazon Dash, circa 2014.

The first product in the Dash family was actually a barcode scanning wand which was freely given to Amazon Fresh customers and designed to hang in the kitchen or magnet to the fridge. When the Fresh customer ran out of milk they could scan the carton as it was being thrown away to add it to their cart for reorder. I suspect these devices were fairly expensive, and somewhat too complex to be as frequently used as Amazon wanted (thus the extremely limited launch). Amazon’s goal here was to allow potential customers to order with an absolute minimum of friction so they can buy as much as possible. Remember the “Buy now with 1-Click” button?

That original Dash Wand was eventually upgraded to include a push button activated Alexa (barcode scanner and fridge magnet intact) and is generally available. But Amazon had pinned its hopes on a new beau. Mid 2015 Amazon introduced the Dash Replenishment Service along with a product to be it’s exemplar – the Dash Button. The Dash Button was to be the 1-Click button of the physical world. The barcode-scanning Wands require the user to remember the Wand was nearby, find a barcode, scan it, then remember to go to their cart and order the product. Too many steps, too many places to get off Mr. Bezos’ Wild Ride of Commerce. The Dash Buttons were simple! Press the button, get the labeled product shipped to a preconfigured address. Each button was purchased (for $5, with a $5 coupon) with a particular brand affinity, then configured online to purchase a specific product when pressed. In the marketing materials, happy families put them on washing machines to buy Tide, or in a kitchen cabinet to buy paper towels. Pretty clever, it really is a Buy now with 1-Click button for the physical world.

There were two versions of the Dash button. Both have the same user interface and work in fundamentally the same way. They have a single button (the software can recognize a few click patterns), a single RGB LED (‘natch), and a microphone (no, it didn’t listen to you, but we’ll come back to this). They also had a WiFi radio. Version two (silently released in 2016) added Bluetooth and completely changed the electrical innards, though to no user facing effect. 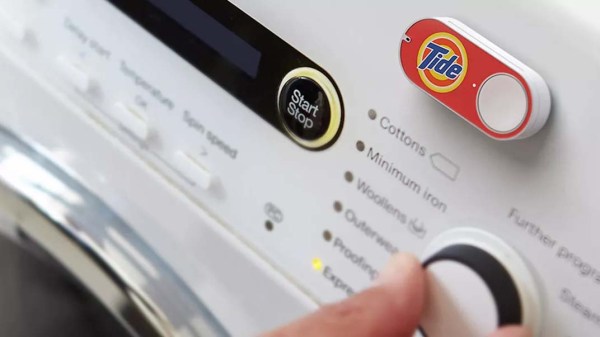 Amazon Dash buttons were the ultimate single purpose networked device; it really can’t get much simpler than a push button that sends a single message to a fixed endpoint. It was an experiment in ultimate convenience, an entry point to a connected home, and a target for critics of consumerism excess and technological overkill.

But soon they’ll be little more than a footnote in the history of online shopping, as CNet reports Amazon will take the order system offline at the end of the month. With the loss of their original intended usage, there’s nothing to stop us from hacking any Dash buttons we can get our hands on.

Of course, this decision should come as little surprise. Amazon’s in-home retail point of sale has graduated from these very limited $5 buttons to Alexa-powered voice controlled devices. Many people also carry a cell phone at all times capable of submitting Amazon orders. While there are many good reasons to be skeptical of internet connected appliances, they’re undeniably finding a niche in the market and some have integrated their own version of a Dash button to re-order household supplies.

But are hackers still interested in hacking Dash buttons? Over the lifespan of Amazon Dash buttons, our project landscape has shifted as well. We’re certainly still interested in the guts an Echo Dot. But if we wanted to build a simple networked button, we can use devices like an ESP8266 which are almost as cheap and far easier to use. Using something intended for integration means we don’t have headaches like determining which generation hardware we have.

Despite those barriers, we’ve had many Dash button hacks on these pages. A to-do list updater was the most recent and we doubt it will be the last, especially as Amazon’s deactivation should mean a whole new flood of these buttons will become available for hacking. 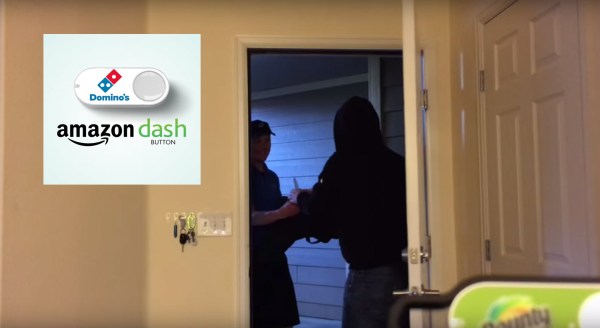 How often have you ever wanted a pizza but reaaaaaaally didn’t want to get off the couch to go order, or god forbid, actually go to a pizzeria to pick one up?  Well [Brody Berson] has the solution for you!  He re-purposed an Amazon Dash button to order himself Domino’s Pizza with the press of a button.

He was originally inspired by our recent post about hacking the Amazon Dash button to do whatever you want — and whatever he wanted was a pizza button. He admits he was inspired by the bachelor years gone by where this would have been really, really handy — apparently he even ordered McDonalds through Postmates once!

It’s pretty simple too — all he needed to do was a bit of coding. Someone had already made a specific Domino’s Pizza API, and thanks to the interest in the Dash button, he was able to find everything he needed to mash together a one-push-button-pizza-delivery-device. END_OF_DOCUMENT_TOKEN_TO_BE_REPLACED