[u407]’s 3D printed Signspinner was created as a clean/dirty indicator for a dishwasher, and at its heart is a mechanism that works a lot like that of a retractable ballpoint pen. Every click of the plunger spins the circular label inside by one-quarter of a rotation. In [u407]’s case it only needs to alternate between showing “clean” and “dirty”, but there are in fact four total label positions. 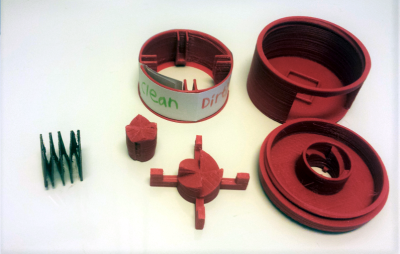 The entire mechanism including the spring is 3D printed, but the spring is PETG and the rest is PLA. [u407] doubts PLA would work for the spring because of how much it gets compressed, but suggests that ABS might work as an alternative.

If you’re having trouble visualizing how this mechanism works, we covered [Bill Hammack] explaining exactly how retractable ballpoint pens work which should make it perfectly clear. It’s fundamentally the same principle.

Somehow [hvde] wound up with a CB radio that does AM and SSB on the 11 meter band. The problem was that the radio isn’t legal where he lives. So he decided to change the radio over to work on the 6 meter band, instead.

We were a little surprised to hear this at first. Most radio circuits are tuned to pretty close tolerances and going from 27 MHz to 50 MHz seemed like quite a leap. The answer? An Arduino and a few other choice pieces of circuitry.

END_OF_DOCUMENT_TOKEN_TO_BE_REPLACED

If there’s one thing any cat will work for, it’s food. Usually, this just consists of meowing and/or standing on your chest until you give up the goods. [DynamicallyInvokable] has a beautiful cat, Emma, who meows loudly for food at obscene hours of the morning. As she ages, it’s getting harder and more important to control her weight. Clearly, it was time to build the ultimate automatic cat feeder—one that allows him to get lazy while at the same time getting smart about Emma’s weight.

After a year and a half of work, the feeder is complete. Not only does it deliver the goods several times a day, it sends a heap of data to the cloud about Emma’s eating habits. There’s a scale built into the platform, and another in the food bowl. Together, they provide metrics galore that get automatically uploaded to AWS. Everything is controlled with an ESP32 Arduino, including a rainbow of WS2812s that chases its tail around the base of the feeder. The faster it goes, the closer it is to feeding time.

The best part about this unique feeder is that nearly every piece is 3D printed, including the gears. Be sure to check out the build gallery, where you can watch it come together piece by piece. Oh, and claw your way past the break to see Emma get fed.

Emma doesn’t have to worry about sharing her food. If she did, maybe [DynamicallyInvokable] could use facial recognition to meet the needs of multiple cats.

END_OF_DOCUMENT_TOKEN_TO_BE_REPLACED

Join us on Wednesday, August 7th at noon Pacific for the Kickstarter Hack Chat with Beau Ambur and Clarissa Redwine!

For many of us, magic things happen on our benches. We mix a little of this, one of those, and a couple of the other things, and suddenly the world has the Next Big Thing. Or does it? Will it ever see the light of day? Will you ever build a community around your project so that the magic can escape the shop and survive the harsh light of the marketplace? And perhaps most importantly, will you be able to afford to bring your project to market?

Crowdfunding is often the answer to these questions and more, and Kickstarter is one of the places where hackers can turn their project into a product. Beau and Clarissa, both outreach leads for the crowdfunding company, will stop by the Hack Chat to answer all your questions about getting your project off the bench and into the marketplace. Join us as we discuss everything from building a community that’s passionate enough about your idea to fund it, to the right way to share your design story.

Our Hack Chats are live community events in the Hackaday.io Hack Chat group messaging. This week we’ll be sitting down on Wednesday, August 7 at 12:00 PM Pacific time. If time zones have got you down, we have a handy time zone converter. 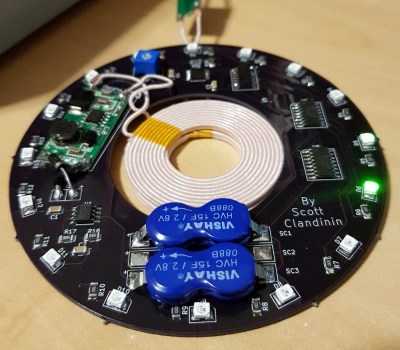