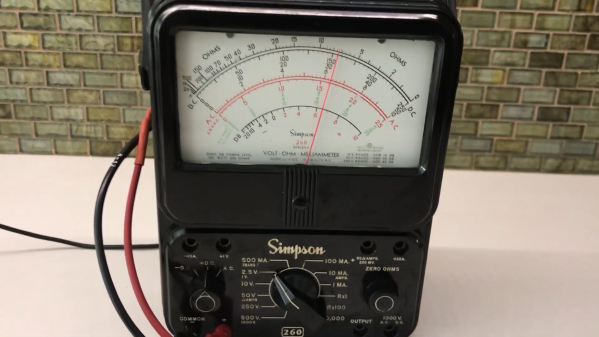 While analog multimeters definitely have their uses, we’re the first to admit that our classic meters don’t see as much action as they could. Repurposing them as [whiskeytangohotel] did is a neat way of keeping those heirlooms around for the next generation. Of course, if you don’t have an analog multimeter, you could also use an analog clock for your ping meter. END_OF_DOCUMENT_TOKEN_TO_BE_REPLACED 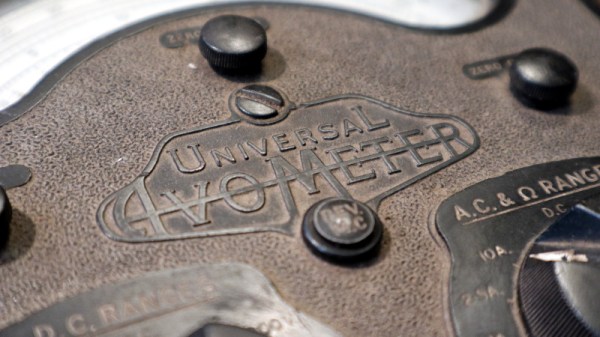 I’m moving, and in the process of packing all of my belongings into storage boxes to disappear into a darkened room for the next year. Perhaps I could become one of those digital nomads I hear so much about and post my Hackaday stories from a sun-kissed beach while goldfish shoals nibble at my toes. But here in a slightly damp British autumn, box after box of a lifetime’s immersion in tech needs sorting and directing. Why on earth did I hang on to three Philips N1500 VCR system video cassette recorders from the early 1970s! (Don’t worry, those have found a good home.)

Say Hello To An Old Friend Of Mine

As I was packing up my bench, I happened upon a multimeter. I have quite a few multimeters and this isn’t the first time I’ve written about these indispensable instruments, but this one’s a little special.

It’s a treasure from my youth, that most venerable of British test equipment: the AVO 8. This was the ubiquitous multimeter to be found in all manner of electrical and electronic workshops across most of the 20th century, and remains to this day one of the highest quality examples of its type.

It’s a relatively huge Bakelite box about 190mm x 170mm x 100mm in size, and it is instantly recognisable  by its dual rotary selector switches and the window for viewing the needle, which forms a characteristic circular arc kidney shape.

The earliest ancestors of my meter appeared in the 1920s, and the first model 8 in the early 1950s. Mine is a Mk III that a penciled date on the inside of its meter movement tells me was made in November 1965 and which I bought reconditioned from Stewart of Reading in about 1991, but manufacture continued until the last Mk VIII rolled off the production line in 2008. It’s to my shame that my AVO is a bit dusty and that maybe I haven’t used it much of late, but as I picked it up all the memories of using it to fix dead TV sets and set up optimistic experiments in radio came flooding back. If there’s one instrument that connects me to the youthful would-be electronic engineer that I once was, then here it is. END_OF_DOCUMENT_TOKEN_TO_BE_REPLACED 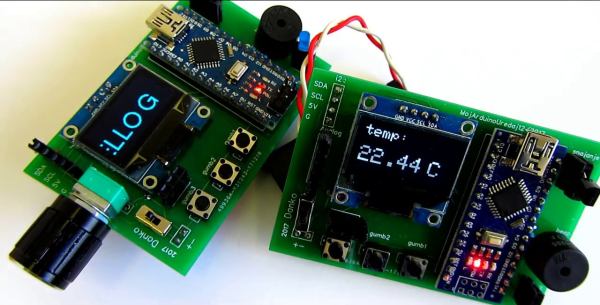 How many times have you wished for a pocket-sized multimeter? How about a mini microcontroller-based testing rig? Have you ever dared to dream of a device that does both?

Multiduino turns an Arduino Nano into a Swiss Army knife of portable hacking. It can function as an analog multimeter to measure resistance, voltage drop, and continuity. It can also produce PWM signals, read from sensors, do basic calculator functions, and display the health of its rechargeable battery pack.

Stick a 10kΩ pot in the left-side header and you can play a space shooter game, or make line drawings by twisting the knob like an Etch-A-Sketch. Be sure to check out the detailed walk-through after the break, and a bonus video that shows off Multiduino’s newest functions including temperature sensing, a monophonic music player for sweet chiptunes, and a virtual keyboard for scrolling text on the OLED screen. [Danko] has a few of these for sale in his eBay store. They come assembled, and he ships worldwide. The code for every existing function is available on his site.

More of a maximalist? Then check out this Micro-ATX Arduino.

END_OF_DOCUMENT_TOKEN_TO_BE_REPLACED

I have a fascination with the various online vendors of electronics and other manufactured goods from China. Here are listed the latest wonders from Shenzhen or wherever, which you can have for a surprisingly reasonable price, with the mild inconvenience of a three week wait for the postage.

A particular pastime of mine is to look for the bottom end of the market. Once I’ve picked up the items I came to order I’ll trawl around with the search with low price first and see what can be had for a few dollars. Yes, I take a delight in finding absolute trash, because just sometimes that way you can find a diamond in the rough.

So when I was shopping for a multimeter recently I took a quick look to see what the cheapest model from that particular supplier was. For somewhere around £2.50 or just over $3, I could have a little pocket analogue multimeter, the kind of “My first multimeter” that one might have found in the 1980s. They weren’t too bad, I thought, and ordered one for less than a pint of beer in a British pub.

END_OF_DOCUMENT_TOKEN_TO_BE_REPLACED

If you were to ask a random Hackaday reader what their most fundamental piece of electronic test equipment was, it’s likely that they would respond with “multimeter”. If you asked them to produce it, out would come a familiar item, a handheld brick with a 7-segment LCD at the top, a chunky rotary selector switch, and a pair of test probes. They can be had with varying quality and features for anything from a few dollars to a few hundred dollars, though they will nearly all share the same basic set of capabilities. Voltage in both AC and DC, DC current, resistance from ohms to mega ohms, and maybe a continuity tester. More expensive models have more features, may be autoranging, and will certainly have better electrical safety than the cheaper ones, but by and large they are a pretty standard item.

If Hackaday had been around forty years ago and you’d asked the same question, you’d have had a completely different set of multimeters pulled out for your inspection. Probably still a handheld brick with the big selector switch, but instead of that LCD you’d have seen a large moving-coil meter with a selection of scales for the different ranges. It would have done substantially the same job as the digital equivalent from today, but in those intervening decades it’s a piece of equipment that’s largely gone. So today I’m going to investigate moving coil multimeters, why you see them a lot less these days than you used to, and why you should still consider having one in your armoury. END_OF_DOCUMENT_TOKEN_TO_BE_REPLACED